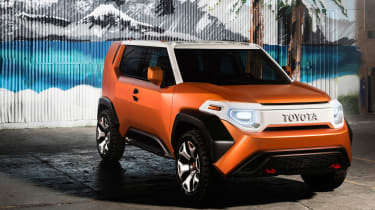 Toyota has revealed a new concept SUV at the New York Motor Show called the FT-4X – standing for “Future-Toyota-Four-Wheel Drive Crossover”. It’s a boxy looking crossover concept designed with young, urban motorists in mind, while its aesthetics hint any production version being a potential successor to the now retired FJ Cruiser – a funky Toyota SUV we never got officially in Britain.

The concept was created by Toyota’s Calty Design Research team in California and Toyota is very keen to stress the FT-4X’s street cred as more of an urban run-around than some of its more rugged off-roaders like the Land Cruiser. Toyota believes it has created a crossover in tune with the millennial generation, placing emphasis on the easy-going character it envisions within the FT-4X.

Some of the design highlights packed into the boxy shape include a GoPro camera built into the side of the drivers’ wing mirror, while the hatch at the rear can open two ways. Called Mutli-Hatch, it can slide horizontally like a van side door for loading in urban environments, while it’s also hinged from the top, which Toyota says creates an “impromptu shelter from the elements”. Aspects of the bodywork itself are created from changeable panels too. 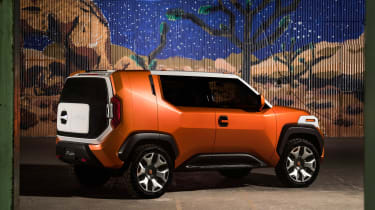 Based on Toyota’s global C-Platform and boasting four-wheel-drive, the FT-4X is comparable to the Range Rover Evoque in terms of size, being a little shorter, at 4,249mm long, and 1,623mm tall. Though the concept is engineless, Toyota hints that a small-displacement four-cylinder engine wouldn’t look out of place under the bonnet. Hybrid technology isn’t mentioned, but Toyota’s presence in the hybrid market and the FT-4X’s urban image means it’s not hard to imagine a part-electrified drivetrain either.

Should the FT-4X translate into a production vehicle to replace the FJ Cruiser, a market release in the UK seems unlikely.

What do you make of the Toyota FT-4X concept? Let us know in the comments!