Everything you need to know about the new Peugeot 3008, its design, technology, testing, prices and specifications 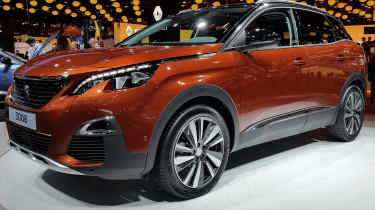 Peugeot has launched its all-new 3008, a new SUV which steps away from the original 3008 model’s MPV inspired outlook and takes on the form of a stylish crossover, which will sit underneath the new 5008.

In the run-up to the car's launch, Peugeot granted Auto Express exclusive access to the new 3008 – then known simply by its codename of P84 – many months before anyone outside of the organisation had seen it. Legal documents were signed and promises made, just so we could let you see some of the thinking behind what is a groundbreaking (and hugely important) new model for the company.

On these pages we bring you a comprehensive in-depth guide to the new Peugeot 3008. We've spoken to the people who created it, followed it through the design and testing phases and explored its advanced technology in detail.

Click the links at the top left or at the bottom of the page to get the fiull story on Peugeot's new Crossover...

Prices for the Peugeot 3008 will kick off at £21,795 when it hits dealerships in January, making it noticeably more expensive than alternatives like the Nissan Qashqai and the newly released SEAT Ateca.

That’s because Peugeot has decided to go practical and premium with its new crossover – the standard equipment list is huge across the range, and it’s a slightly larger car with a bigger boot than many of its rivals, coming in at 520 litres.

Cars in entry level Active trim benefit from a hefty infotainment suite, including a configurable 12.3-inch digital instrument display, as well as an eight-inch touchscreen with built in Apple CarPlay and MirrorLink for Android smartphones. 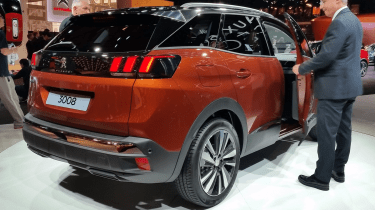 It forms the car’s so-called i-Cockpit interior, the screen laden centre console and dashboard wrapping around and cocooning the driver.

Dual climate control and rear parking sensors also come as standard on the entry-level model, alongside safety equipment such as automatic emergency braking, lane departure warning and distance alert. It sits on 17-inch alloy wheels, with automatic headlights and wipers thrown in.

While standard kit on the entry-level model is extensive Peugeot expects that more than 50 per cent of customers will shell out a little more for Allure trim.

They’ll also get a raft of styling tweaks, setting the car apart from its entry-level sibling. Larger 18-inch alloy wheels are standard, as is the chrome detailing on the front wing, the grey scuff plate on the front bumper, and the stainless steel doorsills. 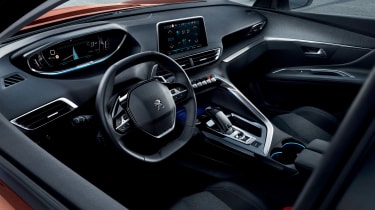 £25,495 GT Line cars get some sporty design tweaks including a different grille, a tweaked front bumper, black roof, a twin exhaust effect rear bumper as well as LED headlamps, foglamps and front indicators. The cabin gets a new look, and features a configurable i-Cockpit system.

The range topper will be the 3008 GT. With a price tag of £32,995 it exclusively gets a 179bhp 2.0-litre BlueHDI diesel engine mated to a six speed automatic gearbox. Fuel economy of 58.9mpg is claimed.

Full leather seats come as standard, while the driver’s seat is eight-way adjustable with a multi-point massage function. There are more design tweaks such as the aluminium roof bars, 19-inch alloy wheels with wheel arch extensions, and a panoramic glass roof. Additional tech such as keyless entry/go, adaptive cruise control and an electric tailgate is also included.

The new 3008 is built on a new platform called EMP2, which is an important part of Peugeot’s plan to release nine new models by 2021. The platform saves weight, which means that the 3008 is around 100kg lighter than the outgoing model, lowering emissions and improving fuel economy.

The turbocharged 1.2-litre PureTech 3-cylinder petrol engine will be the cheapest engine option on every model, with the exception of the GT. Producing 129bhp and 117g/km CO2, Peugeot claims it’ll be capable of 55.4mpg on a combined run. It’ll be available with a six-speed manual or six-speed automatic gearbox. 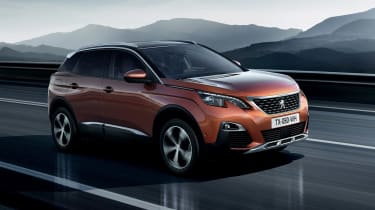 Diesels will kick off with a 98bhp, 1.6-litre option with a five-speed manual for the Active model only. It’ll be the cleanest in the range with 103g/km CO2 emissions, and the joint cheapest to run with claimed fuel economy of 70.4mpg.

A 118bhp diesel will be available across the range and is the most ubiquitous engine choice. It can be had with a manual or automatic six-speed gearbox, and Peugeot claims the same 70.4mpg score for the manual version.

GT line gets a unique engine choice in the form of a 148bhp 2.0-litre diesel, and fuel economy comes in at 67.3mpg.

There are no hybrid or electric models from launch but a plug-in hybrid version of the 3008 will arrive in 2019.

What do you think of the new Peugeot 3008? Let us know in the comments section below...