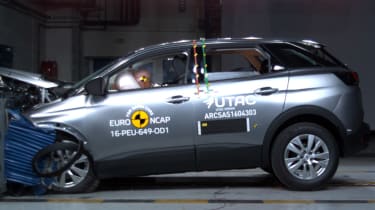 As it’s all-new, the car features the most up-to-date safety equipment and driver aids. The former is there to prevent or mitigate the impact of an accident, while the latter is more focused on making driving safely much more straightforward.

It’s not just about the very latest tech, though, as the car also has a fundamentally good design when it comes to safety, with Euro NCAP awarding the 3008 five stars in its recent crash tests.

In the adult occupant section, the car scored 86 per cent, with researchers complimenting the protection for different-sized front-seat passengers, and gained maximum points in the side impact test. For child occupants, the 3008 scored 85 per cent. Euro NCAP noted that head protection for children was good, and there’s clear indication whether the airbag is deactivated when fitting baby seats. 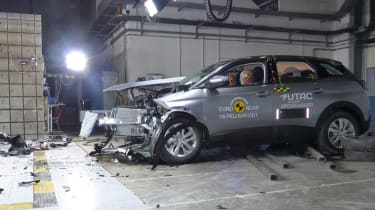 Euro NCAP said that the front of the car had “predominantly good or adequate protection to the head of a struck pedestrian”, and gave it a score of 67 per cent in this category. Maximum points were awarded for the pedestrian’s pelvis and legs, too.

This system monitors the car’s distance to objects in front, and if it calculates that a collision is possible will warn the driver. If the car continues to move towards the object, it will brake automatically, which at low speed can prevent a crash and at high speed will reduce its impact greatly, helping to minimise the chances of occupants suffering whiplash.

Peugeot’s lane keep assist system watches over the road markings, and when it senses that the car has touched the white lines will sound an alert for the driver and display a warning. It can also move the steering slightly to correct the course of the car and return it to the centre of the lane.

By comparing the car’s trajectory with road markings, this system is able to work out if the driver is having trouble concentrating. There are several levels of audio and visual alerts to tell the driver to take a break after two hours of continuous driving. 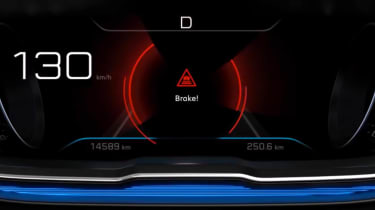 Auto high beam tech makes driving at night on unlit roads easier. It can switch between high and low beams without the driver having to adjust the lights manually. The system senses when oncoming traffic will fall into the beam of light and shuts it off accordingly.

This is standard on all 3008 trim levels, and checks road signs for speed limits. These are then displayed in the car for the driver to refer to, in case they’ve accidentally missed the sign at the start of a new limit zone while concentrating on the road ahead. 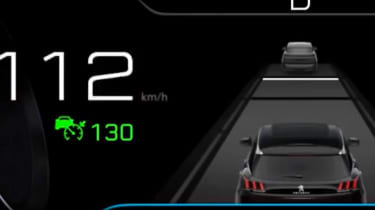 Adaptive cruise control works just like normal cruise control, but will automatically reduce speed to maintain a safe gap to a vehicle that you’re not able to overtake. Peugeot’s system can slow the car all the way to a stop, meaning even congested motorways are less of a hazard.

Lights on either side of the in-car display will illuminate when the 3008 senses another vehicle in its blind spot, so drivers can tell at a glance if there is another motorist nearby. It’s especially useful on the motorway to help ensure safer lane changes in heavy traffic conditions. 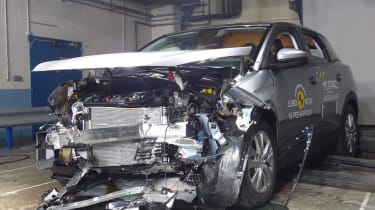 The former helps you to park as easily as possible – Park Assist does most of the work for you, using sensors to work out the best way to squeeze into a tight spot. If you’re parking the car yourself, Visiopark gives either a 180-degree camera at the rear or a full 360-degree view of the car.