How to drive in snow: top tips

Driving in the snow can be risky. These top tips will keep you safe when the roads are blanketed with the white stuff 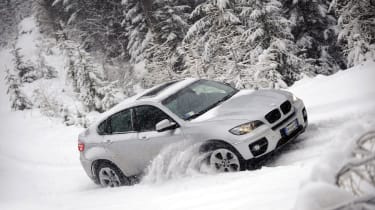 Most winters, snow will bring many of the UK’s main roads to a halt, and not because the asphalt is buried in the stuff, but because lots of Brits just don’t know how to drive in snow. For those untrained in the art of snow driving comes this article, which outlines the basics of driving on roads made treacherous by snow, ice, and everything else winter has to throw at them.

I goes without saying that if you are driving in snow you need to be more prepared than if you are driving in the blazing sunshine – get stuck in sub-zero temperatures at the side of the road without a thick coat and a blanket and you will soon learn why. Not only this, but as snow on the ground increases the likelihood of you having an accident, car journeys are best undertaken only if absolutely necessary.

• Preparing your car for winter

Understanding bosses should consider the weather before forcing employees to journey into work. If you're office based and there is the facility to work from home, then take it up. Plenty of offices now have remote working that means you don't have to risk life and limb to get to your place of work. Of course, when a job requires you to be at a location, then you need to see if you can make alternative plans.

If you feel that you must drive, then plan your journey using main roads. These routes are more likely to have been gritted and cleared by the local authorities. In this instance, it will be better to stick with the traffic than take a chance on untreated back roads, and it means you will be easier to get to if you should break down or have an accident in the conditions.

Of course, with snow comes ice, and you will need to drive gently if you are to make good progress without your wheels spinning away in a blur of motionless fury. When pulling away from a standstill in a car with a manual gearbox, you can use second gear to boost traction. Revving an engine hard means you're sending lots of power to the driving wheels, and using a higher gear means lower revs, which won't overwhelm the tyres so easily.

Once you're moving, it's best to maintain your momentum, as coming to a stop could see you get stuck. But go too fast and you could easily lose control. Keep an extra-large distance to the car in front and look as far ahead as possible so that you are prepared to slow down with plenty of space and time to do so.

That's the basics sorted, while below we've got 10 top tips to help you through the trickiest of conditions.

Top 10 tips for driving in snow

Plan for the worst. Make sure you’ve got warm clothes, a rug, a torch, a snow shovel and maybe some emergency food. Also, make sure your phone is fully charged before setting off or even, have a cheap mobile phone charged and ready to go in the glovebox just in case. Also wear decent driving shoes – driving in snow boots or wellies is a bad idea as it's harder to feel the pedals under your feet. One strong recommendation we would give is to get your car fitted with winter tyres ahead of the cold weather. Once the temperature gets into single figures, then that's when you should get them fitted.

When you're driving avoid sudden applications of the throttle, brakes and steering. If you’re struggling for traction, don’t accelerate excessively – spinning the wheels will only make things worse. Try using second gear to gain grip when pulling away, while higher gears will help the tyres keep their grip. Some automatic gearboxes will offer a winter mode, while in a manual car, try to feel grip by slipping the clutch.

When driving on snow covered slopes, keep the speed slow at the top of the hill. It’s easier to maintain a steady speed than slow down on the descent. Leave big braking distances to vehicles in front – apply the brake pedal gently and avoid triggering the ABS, because the system can struggle to cope if conditions are very slippery. Older cars without ABS may stop sooner, thanks to the locked wheels causing a snowplough effect that sees snow build up in front of them. 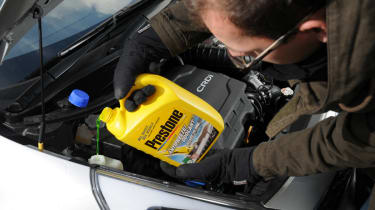 See and be seen

When you start your car, give it plenty of time to warm up, and clear all the snow and ice from your windows and lights - not doing so could be seen as a traffic offence by the police. If there's a lot of snow on the roof, this should be cleaned off, too, because if it falls off while you're driving it could cause a hazard for other motorists. Ensure your screenwash isn’t frozen and your wipers aren't stuck to your windows. When you're driving, make sure your headlights are on and can be seen by other drivers.

Turn your radio on to hear the latest traffic and weather reports, and try and tune into a local station that will have more specific information on your part of the country. Conditions may not be too bad when you set off, but check ahead for your journey, too. If you don’t have winter tyres, try to avoid routes that have steep inclines and stick to main roads, which are more likely to have been treated. 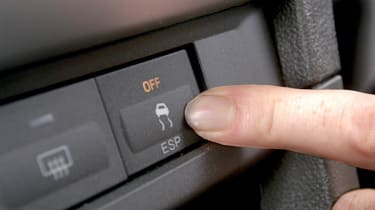 Don’t panic in a slide

If the front wheels start to push across the road, don’t crank on more lock. Ease off the throttle and straighten the steering for a moment to allow the tyres to regain grip. If the rear of the car starts to drift, steer into the slide – known as applying opposite lock. Always look where you want the car to go, because this will help you go in the right direction. Avoid standing on the brakes, as this will lock them and cause ABS-equipped cars to lose their effectiveness.

In snowy and icy conditions, it takes longer to stop and turn. So reduce your speed and leave lots of extra room to the car in front. Watch out for cars around you that may be sliding or losing control. Snow-covered signs and obscured kerbs mean you should pay extra attention to the road infrastructure. 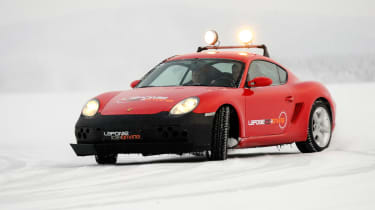 Invest in a course

Nothing takes away the fear of driving in snow more than experiencing it in a controlled environment with expert tuition. Winter driving courses in the Arctic are not cheap, but great fun, and you’ll come away with a host of new skills. If you’re on a tighter budget, a skid control course based on a wet track or in a car that's fitted to a skid rig is worth doing.

If you get stuck in snow and abandon your car, try to move it as far off the road as possible so that you don’t block the way for drivers who are able to continue. If the car starts to slide back down an incline, crank the steering to full lock and apply the handbrake – this will lock the rear wheels, while the fronts will build a bank of snow like a plough, slowing your descent.

What are your top tips for driving in winter weather? Let us know in the comments section below...

Car batteries can go flat for a number of reasons, which is why we have gathered these top tips to help prevent the worst happening
What is aquaplaning and how to avoid it 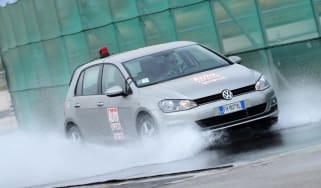 We look at aquaplaning what it means, how it affects your car and what to do if it happens to you