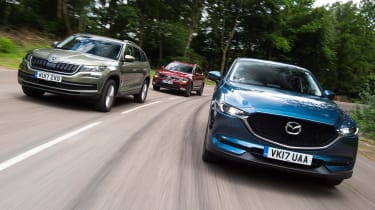 It’s boom time in the SUV market. Families love these cars for their practicality and safety, and business people like their upmarket appearance and relative efficiency in diesel form.

Strong residual values and attractive finance deals mean family 4x4s are now more affordable to buy and own than ever before. Now, Mazda is launching a fresh assault on the class with its all-new, second-generation CX-5. This car has benefited from some major revisions to ensure it’s competitive in a sector that’s moved on significantly since the original model was released back in 2012.

The Skoda Kodiaq and Volkswagen Tiguan are the embodiment of the progress that has been seen, so if the CX-5 wants to succeed and take SUV class honours, it’s got its work cut out. Improvements to the styling, refinement, equipment, comfort and performance mean the Mazda could just take top spot, however. Here we put it under the microscope alongside its competitors in the class to work out which family SUV best mixes upmarket appeal, affordability, efficiency and practicality. 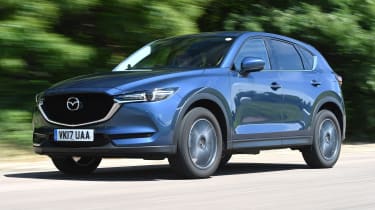 The new Mazda CX-5 range is relatively compact compared with its rivals: just two trim levels are offered. There’s a mix of diesel and petrol engines, but it’s the lower-powered 2.2-litre diesel in two-wheel-drive manual form we test here. In entry-level SE-L Nav spec, this comes in at £25,695 (although our pictures show a Sport Nav model).

The dynamic damper in the pistons cuts engine noise noticeably. The CX-5 is quiet at idle and more hushed on the move, with the extra torque combining with this refinement to deliver a relaxing drive. 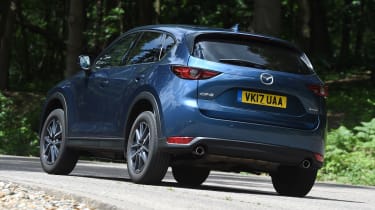 On test the punchier engine gave the Mazda an advantage in-gear; it accelerated from 30-50mph in fourth and 50-70mph in sixth well ahead of its rivals, in 5.4 and 10.0 seconds respectively. The free-shifting but precise six-speed manual box helped it sprint from 0-60mph the fastest, in 9.1 seconds.

The CX-5’s steering is the most communicative here. It’s heavier than the Skoda or VW’s, but it gently ripples with more information – not to the point where it becomes taxing, but just enough to offer you a good connection with the front tyres. 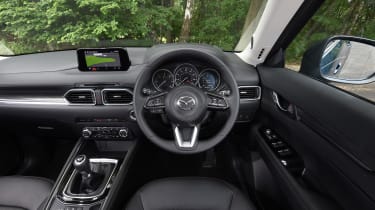 It’s this that gives the Mazda its dynamic edge. The effect of the G-Vectoring Control is so subtle that it’s difficult to feel it working in truth, but the CX-5 certainly turns in sweetly. There’s plenty of grip to lean on, while the suspension takes up a nice amount of roll but controls body movement well.

The Mazda’s damping feels plush and slightly better controlled than its rivals. Only occasionally does it lose its composure. However, the difference is still marginal at normal speeds, and although this makes it the most enjoyable car to drive, around town and on a cruise there’s not much in it.

Testers’ notes: “It’s a pity many features, such as the extra safety kit and a power tailgate, are limited to the high-spec CX-5 Sport Nav. Family buyers would find these additions attractive.” 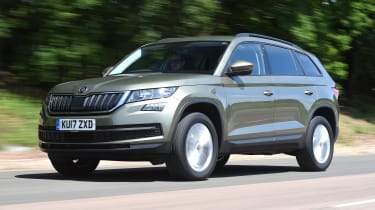 This is Skoda’s first proper SUV. While the Yeti was always a crossover, the Kodiaq takes on the brand’s mantle of offering practical family transport with some premium touches at mainstream prices. It’s available with five or seven seats and a range of petrol and diesel engines linked to manual or dual-clutch automatic transmissions, while two and four-wheel drive feature, too. To match the Mazda, we tested the £27,300 five- seat Kodiaq 2.0 TDI manual in SE trim here.

It’s easy to tell the Skoda’s underpinnings, because like most MQB-based cars, the steering is precise, albeit a little light and numb. However, along with the raised body due to the taller ride height and longer-travel suspension, this set-up means it isolates you from the road nicely. 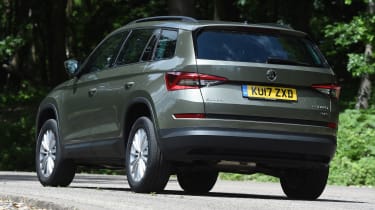 On our test car’s standard 18-inch wheels, with relatively tall tyres, the ride was supple, with the Kodiaq’s suspension tuning out unwanted wheel movements nicely, while keeping the body relatively stable. There’s still an underlying edge to the ride over washboard surfaces, but this calms down once the car is loaded with people and luggage.

There’s a level of refinement to match the ride quality, too. While the engine might be a little more vocal than the Mazda’s, it’s still not overly intrusive and you can use the revs before it becomes too noisy. 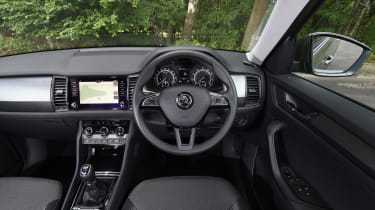 You’ll have to rev the 2.0-litre turbodiesel a little harder than the Mazda CX-5’s 2.2, as the Kodiaq is hampered slightly by its lack of torque and heavier body. It was two tenths slower than the Mazda from 0-60mph as a result, and even with shorter gearing it couldn’t match the CX-5 through the ratios. Still, in most of our acceleration tests it was only four tenths behind, which you’d struggle to notice on the road.

The engine offers more than adequate performance, while the chassis and gearshift strike a nice balance between involvement, comfort and refinement – and for SUV buyers, the latter two are more important than outright speed or handling. But 4x4 traction will be reassuring in winter.

Testers’ notes: “Until the VW Tiguan Allspace arrives, the Kodiaq is the only car here that’s available with seven seats. It adds £1,000 to the price, but highlights the versatility of the platform.” 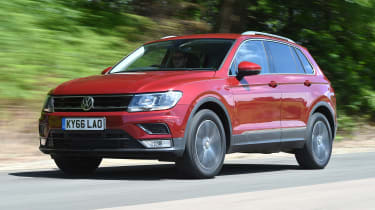 The Volkswagen Tiguan is one of the most hi-tech SUVs around, but this five-seat family off-roader will need more than cutting-edge kit to overcome its rivals. We tested the £28,865 Tiguan 2.0 TDI two-wheel-drive manual in SE Navigation trim, although our pictures show a DSG auto model.

As with the Skoda, it’s easy to spot the MQB chassis’ traits here. The steering is precise and nicely weighted, which means you can make the most of the impressive grip on offer. However, the Tiguan doesn’t have the personality of the competition and actually isn’t as enjoyable to drive as its two rivals. 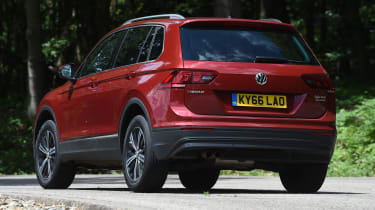 Part of that stems from the chassis. Although our test car was fitted with the £810 Dynamic Chassis Control adaptive dampers, which deliver plenty of comfort in their softer setting over undulating country roads, harsher bumps and potholes still send a shudder through the chassis.

The Kodiaq’s extra body mass and wheelbase length mean these impacts aren’t quite as noticeable, while the damping in the Mazda is plusher and better controlled at higher speeds over rough roads.

The other part of the problem is the Tiguan’s engine. The 2.0 TDI unit feels relatively strong, although it trailed the Mazda by three tenths from 0-60mph. Plus, its in-gear performance wasn’t as peppy as the CX-5’s; it was nearly a second slower than that car from 50-70mph in top gear. 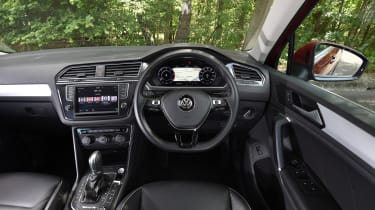 It’s also not as refined as either of its competitors in this test. The Mazda’s clever new piston pin tech highlights the diesel rattle produced by the Tiguan, especially when the unit is cold or at higher revs. Despite using the same engine, the Kodiaq is quieter through the rev range and at a cruise.

The manual gearbox is nice, though. The action is very similar to the Skoda’s, isolating you from the harsher feedback, but providing just the right level of interaction. Although the chassis is more than capable, it’s a shame that it doesn’t deliver the driver involvement of the Mazda, in particular.

Testers’ notes: “The CX-5 has quality, the Kodiaq incredible versatility and the Tiguan tech. Options such as the digital dial pack make it feel advanced, but the Gesture Control seems gimmicky.” 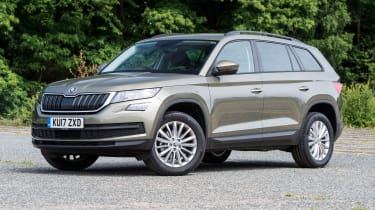 The Kodiaq’s extra practicality is just enough to steal victory by the narrowest of margins. It’ll cost business buyers more to run, but an even more relaxing, cleaner and cheaper DSG version is available. Performance is adequate, while it offers lots of comfort and refinement in a slickly executed, high-quality package. It’s the most usable and versatile car at an affordable price. 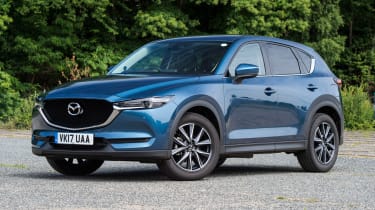 Mazda’s new CX-5 just loses out to the Kodiaq as it feels more cramped inside and trails on boot space. While it’s quick and involving, family SUV buyers’ focus is more on comfort and versatility; the Skoda matches it on the former and has it easily beaten on the latter. Still, the CX-5 is good to drive and offers lots for the money, plus has a high-quality feel and will resist depreciation best. 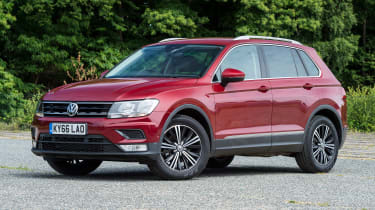 In this company the VW is just too expensive and will lose too much of its value to compete. The Kodiaq is also more flexible, while the Mazda is better equipped and more refined. The Tiguan is the slowest and noisiest car, although the engine does deliver good efficiency and PCP deals are attractive. However, the margins are really tight in this class, so the VW takes third. 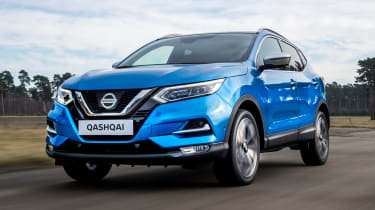 It’s not as powerful and doesn’t look that different, but the revised Qashqai gets a tweaked infotainment system with nav and, in N-Connecta spec, lots of safety kit. The 430-litre boot trails rivals. 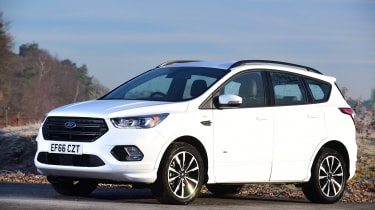 The Ford is another driver-focused SUV, although it doesn’t offer the classy ambience or quality of the Mazda. The 456-litre boot isn’t the biggest, and while it’s pricey, you should be able to haggle a good discount at your local dealer.