There’s a new Ford Fiesta, but can it fend off the SEAT Ibiza and Skoda Fabia at the top of the supermini class? 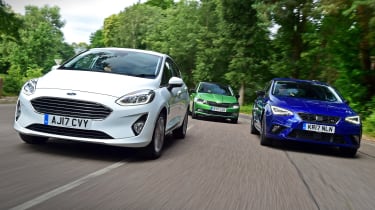 Britain loves superminis. Every year the new car sales charts are topped by compact hatchbacks such as these, and the most successful has always been the Ford Fiesta, so there’s a lot riding on the latest model.

But this seventh-generation variant isn’t necessarily assured to inherit its predecessor’s position as Britain’s best-selling car, because the fight for sales in the supermini sector is as fierce right now as it has ever been in the past.

We crowned the all-new SEAT Ibiza our Best Supermini at the recent Auto Express New Car Awards, and this is the first time the two have met in a test. SEAT has given the Ibiza a sharp design, plus great practicality and tech, while its 1.0-litre turbo petrol engine should deliver decent performance and efficiency, so this is shaping up to be a really close contest.

However, could there be an interloper in the pack? We still rate the Skoda Fabia highly as a supermini thanks to its affordability and usability.

And now the Czech brand has added the same 1.0-litre TSI engine that is found in the new Ibiza, it has given the older Fabia a shot in the arm. 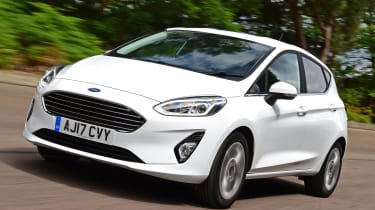 The launch of this new Fiesta is a pivotal moment for Ford. Can the car pick up where its predecessor left off when it comes to driving dynamics, but boost areas where it was lacking? It’s available in three and five-door form, but here we test the £15,445 1.0 EcoBoost five-door Zetec model.

Ford has enhanced how the Fiesta drives with this new version. It’s better than ever, with the most communicative steering and chassis of this trio. It really injects a sense of fun into the experience. 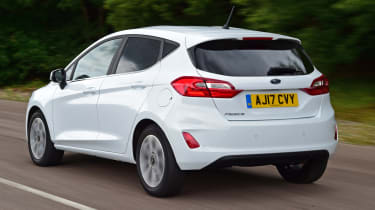 There’s a good amount of torque, with 170Nm available. This is actually 5Nm less than the Ibiza, but the Fiesta had an advantage in gear. That’s partly due to the six-speed box; its competitors only use five-speed transmissions, which means the Ford’s intermediate ratios are shorter.

It accelerated from 30-50mph in fourth in 6.8 seconds, for example, whereas the Ibiza took 8.1 seconds. The Fiesta completed the 50 to 70mph test in fifth in 10.2 seconds, whereas the SEAT took 12.0 seconds, while the extra ratio in the Fiesta’s transmission also means it’s more refined at a cruise. 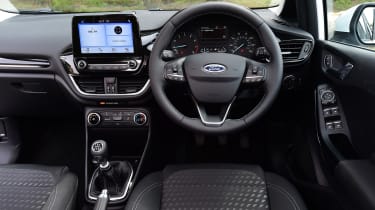 Part of that is down to the quieter engine as well, but it’s the Ford’s ability to absorb the road and suppress road noise better than the Ibiza that makes it a more relaxing car. The suspension deals with bumps brilliantly and it controls body and wheel movement at the same time far more effectively than the SEAT. It softens impacts with finesse, while the Ibiza feels harsher over the same roads. This gives the Fiesta an incredible breadth of ability for a supermini. It’s the most comfortable, the most agile, engaging and fun car to drive, but also more relaxing when all you want to do is go from A to B.

Testers’ notes: “Ford has added the Fiesta Active crossover to the range. But this is more of a jacked-up, five-door Fiesta, unlike the Ibiza-based Arona, which has more of a compact SUV stance.” 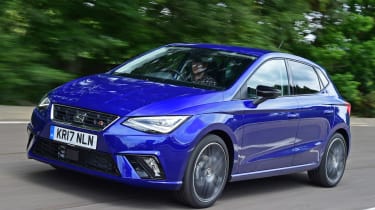 The Ibiza marks a big step for SEAT, as it’s the car that introduces all-new technology in the supermini sector for the VW Group. But is that enough to fend off the challenge from the Ford? We test the £16,015 Ibiza 1.0 TSI 95 FR to find out.

The answer isn’t exactly clear-cut. The Ibiza’s new 1.0-litre turbocharged three-cylinder petrol unit is strong. It helped the car sprint from 0-60mph in 9.8 seconds – the exact same time as the Ford. 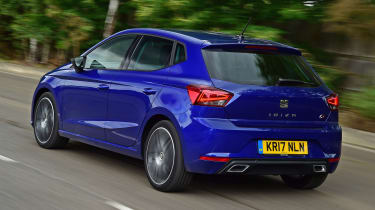 In isolation it also feels relatively punchy in gear. However, its 50-70mph time in fifth was also slower than the Skoda’s, trailing by two tenths of a second. When you factor in that the Ibiza’s engine is also noisier and less refined than the Ford’s, plus it’s more vocal than the same installation in the Skoda, when it comes to all-round performance on the road, the SEAT is a step behind the Fiesta.

This trait runs right through the car. The sports suspension and 18-inch alloys on our model caused more road noise on the move, while the stiffer set-up isn’t as compliant as the Fiesta or Fabia’s, either. The Ibiza still has great body control, which lets you lean on the chassis and enjoy the accurate steering, but it doesn’t have the breadth of ability of the Ford. 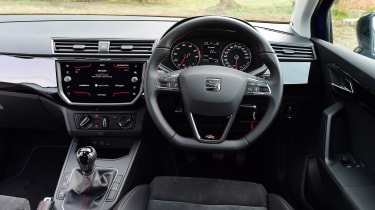 It’s not as much fun to drive on a B-road and isn’t as comfortable on the motorway. The five-speed manual transmission has a marginally more precise action and feels more mechanical, but the weight is heavier, which makes the Fiesta feel easier to change gears. The control weights aren’t quite as well balanced as the Ford’s, either, with an overly jumpy brake pedal. The Spanish car’s chassis still absorbs bumps relatively well; it’s just that the Fiesta is more compliant, plus it manages to do this without rolling in the corners. 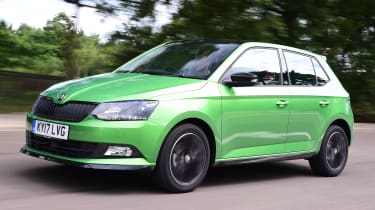 Since its launch in 2014, this third-generation Skoda Fabia has always been the practical choice in the supermini sector, but with a new crop of cars arriving, has its usability and versatility been overshadowed by cars such as the Ford and SEAT? We test the new 1.0 TSI engine in the Fabia Monte Carlo trim, which costs £16,100, to find out.

Although the Fabia is around 100kg lighter than the Ibiza and Fiesta and boasts a similar amount of power, it was half a second slower than both its rivals from 0-60mph at the track, taking 10.3 seconds. 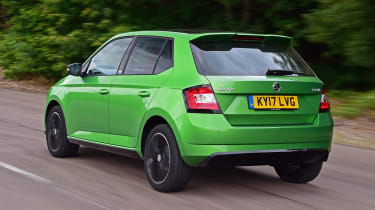 However, it’s the Skoda’s lack of torque that’s more apparent, as with just 160Nm – albeit produced low down at the same 1,500rpm as its competition – the Fabia was slowest car of the three during our lower speed in-gear tests.

But as it has shorter gearing than the Ibiza, turning 2,800rpm at 70mph against 2,500rpm, it was actually two tenths faster than its VW Group cousin in this test from 50 to 70mph in fifth.

It can’t match the Fiesta for refinement, but pulling more revs than the Ibiza doesn’t hurt the Fabia’s cruising ability; the engine is quieter when revved compared with the Ibiza’s, while the Skoda suppresses noise well on the move.

Coupled to this, the Skoda’s ride is also not as firm as the sportier-feeling SEAT’s. However, the damping feels just as forgiving as the Ibiza’s. 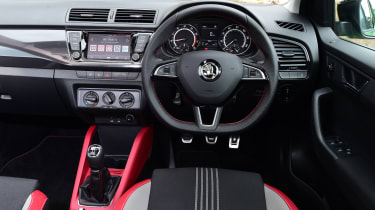 It doesn’t tie the body down quite as well, but there’s a fair degree of compliance, which delivers a comfortable ride. Nevertheless, as with the SEAT, it feels a step behind the Ford in this respect.

The steering is also nicely matched to the chassis, and while it doesn’t have the Ford’s feedback or the SEAT’s grip and precision, the Skoda is still surprisingly good to drive given its age and approach that leans more towards functionality than fun.

Testers’ notes: “Practicality has always been the Fabia’s rationale, but with more spacious, better-equipped and cheaper supermini rivals now on sale, the Skoda has lost its USP.” 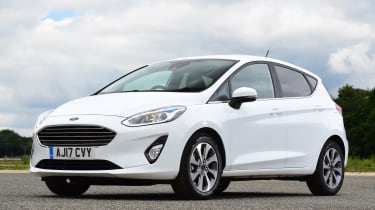 This is an incredibly close-run result, but the Fiesta offers more fun more of the time, and combined with its stronger efficiency and refinement, we think it’s worth the extra £15 per month. The cost gap could grow even tighter as Ford’s PCP deals are likely to improve over time with a deposit contribution. But for now, in these trims, the Fiesta just takes victory by the narrowest of margins. 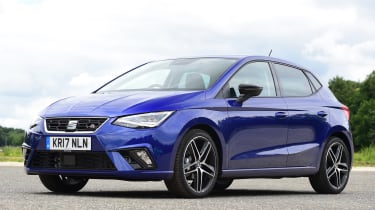 If you’re after space, then the Ibiza is the supermini for you. It’s a brilliant small hatchback, and alongside the large load bay the car gets some useful safety kit, but it’s not as comfortable, as refined or as economical as the Ford, which will matter more day-to-day. It’ll be affordable to buy and run, while a good level of kit should make it easy to live with. 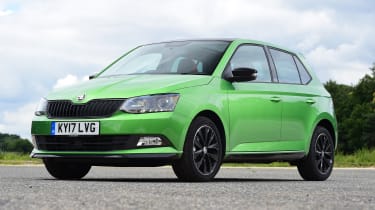 In this company the Fabia feels at least a generation behind its two cutting-edge rivals. It’s still surprisingly good to drive, while the new 1.0 TSI unit has given it a new lease of life, adding even more refinement to the car’s acceptable level of comfort. But the sector has moved on and the Skoda no longer excels in any one area, which is why it finishes third here.

Is it worth waiting for… 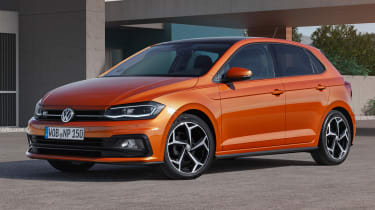 Using the same MQB chassis as the SEAT, the VW Polo should combine quality and comfort with practicality. We’ve seen the car in the metal and inside it feels a cut above the SEAT, yet shouldn’t cost too much more.