Rugged estates in the form of the Volvo V90 Cross Country and VW Passat Alltrack vie for practical, off-road glory 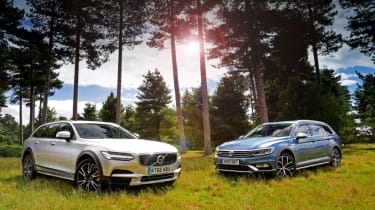 Volvo has always executed its estate cars well, and adding an off-road flavour with its Cross Country models in the past has given them even more versatility.

The firm’s V90 Cross Country is no exception, mixing Volvo’s new-era tech and style pioneered in the XC90 SUV and more recently, the regular V90 estate, with some all-terrain ability. The V90 Cross Country is the new challenger to the Volkswagen Passat Alltrack that beat a pair of rivals in Issue 1,475, so can the upmarket Volvo compete?

It will have to deliver a better blend of premium appeal, kit, fuel efficiency and off-road talent if it wants to usurp the Passat, but on paper, the Volvo is closely matched. 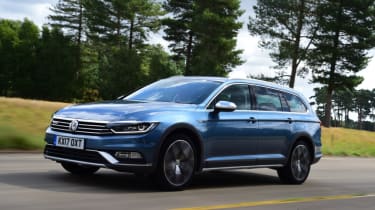 It’s funny how a few modifications to a car can give it a distinctly different identity. The Passat Alltrack is based on the regular Passat Estate, but benefits from chunky visual tweaks and an increase in ride height, plus the addition of four-wheel drive.

It only rides 27.5mm higher than the regular VW, though, so with less suspension travel than the V90 Cross Country, it’s more susceptible to ridges in the surface. The car feels lumpier and less flowing than the Volvo on the same stretch of road; it’s not crashy or annoying, but can’t match its rival’s pillowy ride. 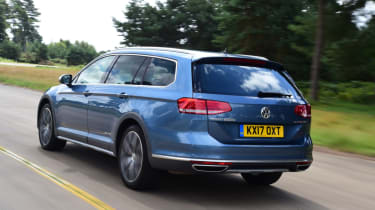 On the flipside, the Passat is more direct to drive, with sharper steering and more grip. The Volvo has a decent level of grip, but it sits higher than the Alltrack, which means it rolls more (selecting Dynamic mode for the air suspension helps this, but you lose some of the compliance). Also, the longer wheelbase means it doesn’t turn in as quickly or feel quite as agile.

This responsive nature was reflected in our straight-line performance tests, because although the Passat’s 2.0-litre TDI unit delivers the same 187bhp and 400Nm of torque as the V90’s 2.0 litre, the car is lighter. As with the Volvo, four-wheel-drive traction off the line helped deliver a decent 0-60mph time (8.1 seconds here), but the VW’s six-speed DSG dual-clutch auto box also gets launch control, plus the shifts are snappier, which helps undercut the Cross Country. The Passat was four tenths faster than the V90 through the gears from 30 to 70mph, too, reinforcing this point. 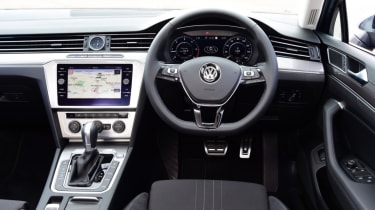 Its in-gear times eclipsed the Volvo’s, despite the Passat having two fewer ratios in its transmission to span a similar speed range. The 50 to 70mph time in fifth was particularly strong, at 8.3 seconds, despite the taller gearing; the 2.0 TDI has to work harder, but higher cruising revs of 2,000rpm at 70mph in top, combined with the firmer ride and coarser engine, mean the VW isn’t as soothing over long distances.

This is all relative, though, because it’s still fairly comfortable; you just see where the extra money on the Volvo goes when it comes to refinement. Still, the Passat claws back ground in the load bay. It’s bigger with the rear seats in place, at 639 litres, but fold them and the 1,769-litre space is vast, and much larger again than the 1,526 litres in the Volvo.

You don’t get quite as much kit in the Alltrack, but this higher-powered model is still well equipped. Sat-nav, DAB, Bluetooth, heated seats, three-zone climate control, adaptive cruise, 18-inch alloys and Alltrack-specific black plastic body cladding all feature, to match the Cross Country’s different design details. LED headlights are £730, and leather will set you back £1,845, with keyless entry and go £405. 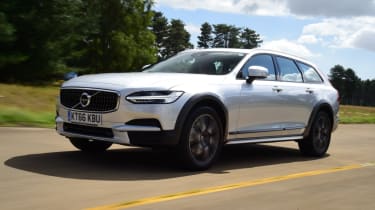 Volvo’s regular V90 is a great estate, offering lots of space, technology and equipment at an affordable price, but adding all-wheel drive and raising the ride height for this Cross Country model provides customers with an even wider choice within the range.

The extra traction will be useful in slippery British conditions which, let’s face it, can come at any time of year. With the 65mm increase in ride height and resultant boost in suspension travel, combined with our test car’s taller tyre sidewalls and – most importantly – the £1,500 optional adaptive dampers with air suspension at the rear, the Volvo’s chassis flows with the road, soaking up lumps and bumps with plenty of comfort.

It’s incredibly spacious, too. The Volvo is longer than the Passat, and there’s more space between the wheels as well. As a result, rear passengers get plenty of legroom, but despite the V90’s larger dimensions, its 560-litre boot is actually 79 litres smaller than the Passat’s load bay. 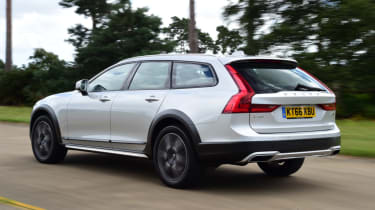 However, the Volvo has a clear advantage inside. It’s nicely trimmed and more individual than the Volkswagen, with a cool Scandinavian edge to the design that’s launched Volvo from also-ran to a genuine contender in every sector in which it’s introduced a new model since the XC90 arrived in 2015.

There is an elephant in the room, though: the price. These cars offer the same power and the VW features a bigger boot, so the Cross Country looks a little bit expensive, even though it has more of a premium feel than its rival. The cost to buy is more closely matched if you go for a PCP.

However, the V90 does get plenty of equipment. The entry-level Cross Country features sat-nav, DAB and Bluetooth as part of the nine-inch touchscreen tablet-style infotainment, plus heated leather seats, dual-zone climate control, LED headlights, adaptive cruise with Volvo’s semi-autonomous Pilot Assist system and 18-inch alloys. Specify a similar level of kit on the Alltrack and it would take the price to more than £39,000. 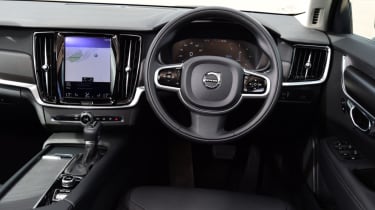 The bigger, heavier Volvo wasn’t as fast on test, though. Its 2.0-litre four-cylinder turbodiesel engine serves up the same 187bhp and 400Nm of torque as the VW, but the heavier 1,826kg V90 accelerated from 0-60mph in 8.9 seconds.

Then again, the eight-speed auto box is silky smooth and shifts gears imperceptibly when cruising. The engine is better like this as well, because it can be a bit noisy if you rev it hard. But this is even more noticeable with the VW’s unit. 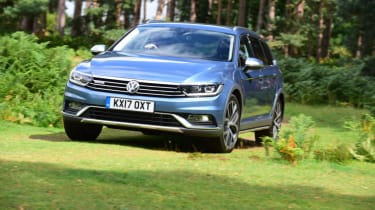 The VW wins by virtue of its affordability and versatility. It’s sharper to drive but not quite as comfortable as the Volvo, which is still a big factor here. However, the Passat earns victory on account of its superior practicality, performance, efficiency and lower running costs. 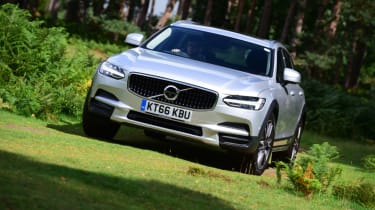 There are few areas where you can criticise the Cross Country. It combines comfort, lots of equipment and refinement, but loses out on two points that matter here: price and practicality. However you cut it, the V90 will be more costly to buy and own, so the cheaper Passat just takes victory.