Citroen has turned its C4 Cactus SUV into a family hatch, but this has put it into the sights of the VW Golf and Vauxhall Astra 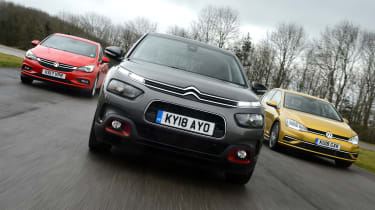 With buyers drifting more and more away from traditional family hatchbacks and into crossovers, you wouldn’t expect a car maker to turn one of its best SUVs into a hatch – but that’s exactly what Citroen has done with its updated C4 Cactus.

However, the latest C4 Cactus hatch isn’t a completely new model; this is a mid-life facelift, something usually associated with a fresh nose and some extra alloy wheel choices. In fact, the Citroen’s powertrain and mechanical make-up have barely changed, and nor have its dimensions. By repositioning the C4 Cactus as a conventional family hatch, the brand has proven that a bit of plastic body cladding and a tall stance are enough to convince buyers that their car is an off-roader of some kind.

With these trinkets removed, the family hatch underneath reveals itself, even with some rather minor changes. As the new C3 Aircross holds the top spot in the small SUV class, Citroen couldn’t have two models competing for sales, so its much-loved C4 Cactus finds itself taking on some pretty serious rivals in the form of the Volkswagen Golf and Vauxhall Astra. Both of these established hatches offer loads of space along with top driving dynamics, a comfortable ride and solid infotainment.

Given the competitors’ wide range of talents, it’s a risky move on Citroen’s part. Will it pay off? 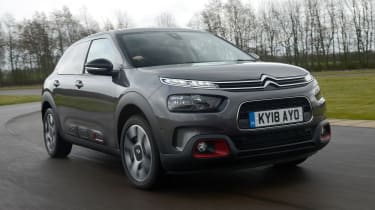 The new Citroen C4 Cactus might have morphed from a small SUV into a more conventional VW Golf-rivalling hatchback, but it has retained much of its quirky character, as well as its good-value price tag. This Flair model fitted with a 1.2 PureTech 110 petrol engine and a manual box costs £19,870, and is the cheapest car of our trio. 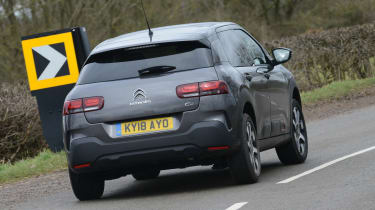 Thanks to its five-speed transmission, top gear in the Citroen is longer to better handle motorway travel. The Vauxhall suffers from the same problem, but the Golf has six ratios. That gives it more flexibility around town and on country roads, while also improving economy at speed, thanks to the lower cruising revs it can achieve.

The Cactus’s engine has enough poke to keep up with the Golf on the road, but its gearbox feels baggy and isn’t very satisfying to use, especially after trying the sweet shift in the Volkswagen. The Astra’s box is a little better than the crunchy Citroen’s, too.

Keen drivers will soon notice that the C4 Cactus is nowhere near as engaging as its rivals down a twisty road. The steering is vague and short on feedback, while the softly-sprung suspension means there’s a lot more body roll than in either competitor. Still, the comfort-focused set-up was something we praised highly on the previous model, and it’s a similar story here. The new PHC suspension is excellent at dealing with bumps and potholes in the road, and the C4 Cactus is certainly the most comfortable choice of the three cars. 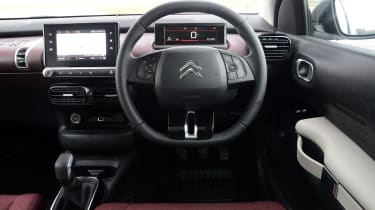 The problem is that when the Citroen was up against SUVs, the lack of driver involvement didn’t matter as much. Against the Golf and Astra, it loses out to their combination of comfort and agility.

Testers’ notes: “The Citroen’s engine has the most torque of the three power units on test, and as it produces its 205Nm figure at just 1,500rpm, it feels usefully punchy from low down in the rev range.” 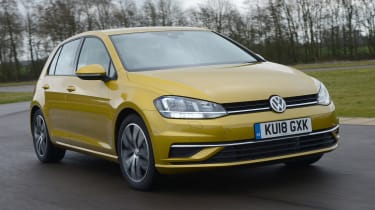 The Volkswagen Golf is one of the best-selling cars in Britain, and has been for decades. A facelift in 2017 added more safety features and a better infotainment system, but the Golf’s superb practicality and versatility are still present. On test here is the 1.0 TSI 110 model in SE Navigation spec, which costs from £20,730.

One reason why the Golf has stayed at the top of the sales charts for so long is that it manages to combine comfort and handling so well. It’s not just a smooth-driving family car, it’s also an enjoyable one. 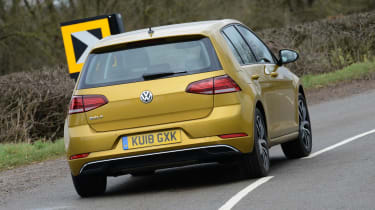 The 1.0-litre turbocharged three-cylinder petrol in this model is a superb engine. It’s fairly quiet and smooth at a cruise, and produces a characterful engine note when pushed a bit harder, but not at the cost of its trademark refinement.

At the track, the reward for pressing on was a fine set of results in our performance tests. It was the quickest car from 0-60mph and from 30-70mph. From 30-50mph in third gear it took 4.1 seconds, which was more than a second faster than the Astra, and six tenths up on the C4 Cactus. Also, in fifth gear, the six-speed Golf only took 8.1 seconds to go from 50-70mph, which beat the Citroen’s 9.8 seconds and the Vauxhall’s 12.5 seconds, so getting up to speed on a slip road should be a bit easier in the VW.

The steering is direct and well weighted, so cornering is fun, and there’s also plenty of grip and good body control. It’s close between the VW and the Vauxhall when it comes to driver engagement, but small things like the Golf’s slick gearchange mean it’s easier to get to grips with. 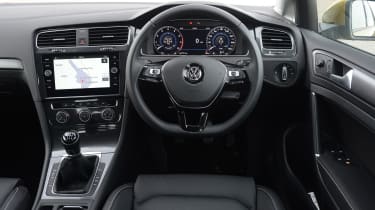 Far from being a one-trick pony, the Golf blends fun with refinement and comfort. It’s as composed as the C4 Cactus, but is much better to drive.

Testers’ notes: “The Golf has the highest towing capacity of the three cars on test here, with the potential to pull up to an impressive 1,300kg. The C4 Cactus is less versatile; its towing limit is only 825kg.” 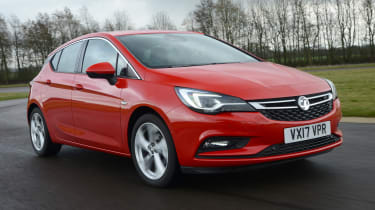 The latest Vauxhall Astra shot to the top of the family hatchback tree when it arrived in 2015, but with revisions and updates to rivals like the VW Golf, is it starting to fall behind? Here we’re testing the popular SRi Nav model. With a 1.0-litre turbo petrol engine under the bonnet, it carries a £21,100 price tag.

While the 1.0-litre engine in this version of the Astra is the least powerful unit in this trio, it’s only 4bhp down on the others. However, a torque deficit of 35Nm to the C4 Cactus and 30Nm to the Golf led to the Vauxhall falling behind in our performance tests. 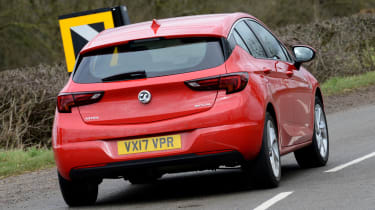 The Astra accelerated from 0-60mph in 10.5 seconds, which was behind both the other cars, albeit only four tenths of a second in arrears to the Citroen. In the 30-70mph test it was only five tenths behind the C4 Cactus, and on the road the difference doesn’t feel all that great. Both are punchy enough to give you confidence in manoeuvres like overtaking.

The Vauxhall’s in-gear performance tells a similar story, as it fell slightly behind the Citroen and trailed the Golf by a long way in our 30-50mph and 50-70mph test runs from third to fifth.

Despite losing out slightly on all-out performance, the Astra is right up there with the VW when it comes to driver engagement, because its handling and ride are accomplished. The Astra rides well on rough British roads, too, and while it’s not as supple as the Citroen, it’s close enough that it hardly feels lacking in that area. Well-weighted steering and good body control mean it’s much more fun than the C4 in bends, and perhaps even more fun than the Golf, if a little less comfortable than the VW overall. 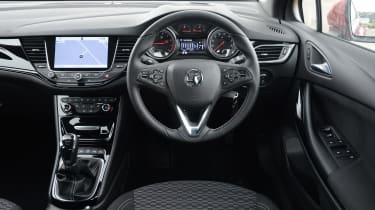 The Vauxhall’s gearshift is a touch rubbery and doesn’t feel nearly as pleasant to use as the Golf’s, but the Astra does score with a good driving position and heavier control weights, which give it a slightly more substantial feel from behind the wheel.

Testers’ notes: “Vauxhall’s OnStar concierge service is a great addition to the Astra. As a bonus, it puts a WiFi hotspot into the car, allowing your passengers to connect their devices to the Internet.” 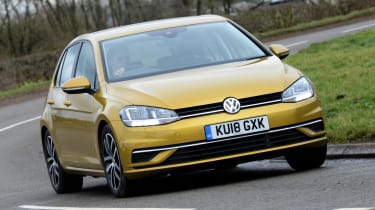 The VW Golf remains at the top of the family hatchback class for the same reasons it took the crown in the first place. Its range of ability is astonishing, expertly blending superb practicality, engaging handling, ride comfort and low running costs into one affordable package. It’s full of the latest tech, and interior quality is also top notch, so it shades its rivals in nearly every area. 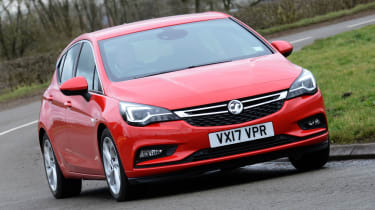 It’s starting to feel a bit dated next to the Golf now, but the fundamentals of the Astra are so solid that it finishes second here. It blends ride comfort and driver engagement in a similar way to the VW, while also being more practical than the Citroen. It’s a little less economical than the C4 Cactus, but not by a big enough margin for this to affect many buyers’ choices here. 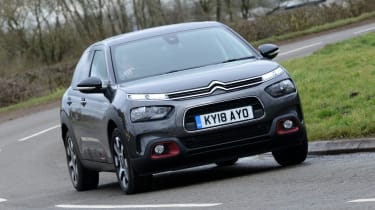 The C4 Cactus was a superb small SUV, but in the move up to the family hatch class it has lost its way somewhat. While it’s comfortable, has a punchy petrol engine and is cheap to run, the Citroen doesn’t match its rivals on practicality or handling fun. Still, it’s a worthy choice for those who prefer to prioritise comfort over driver enjoyment. 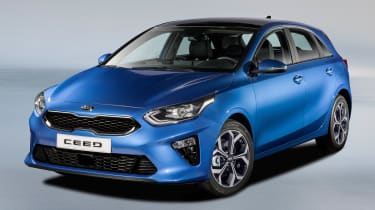 A new Kia Ceed (note the lack of an apostrophe) will hit the market this summer. The all-new model boasts a practical 395-litre boot, a more sophisticated chassis and 1.0T petrol power to take on its rivals.