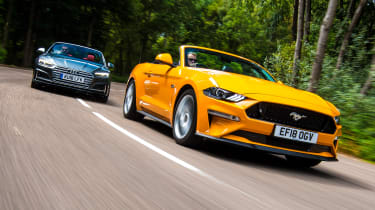 The UK is enduring one of the hottest summers in memory, with blue skies and sunshine every day for weeks on end. So what better way to make the most of the current heatwave than with a convertible sports car?

There’s a new one on the market, too, in the shape of the revised and updated Ford Mustang Convertible.

It’s been given more power, a new automatic gearbox, revised suspension and a new, fruitier exhaust. The Ford is loud all round, from the design to the engine noise, and looks like it could be a summer hit. But it faces some stiff competition here, because the V8 automatic model has a price tag that puts it up against some premium rivals.

Here we’ve lined up the Audi S5 Cabriolet to take it on. While the Audi is less powerful than the Mustang, both cars offer similar performance, four seats and a folding canvas roof.

Which drop-top is the better all-round sports car for making the most of the summer? We’ll find out in this test. 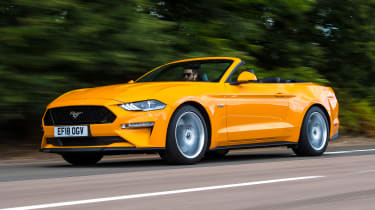 For: Likeable engine, well equipped, there’s nothing else like it in the UKAgainst: Dim-witted gearbox, poor interior quality, expensive to run

When the Mustang arrived in the UK in right-hand-drive form in 2015, buyers loved its all-American attitude and surprisingly low price point. But over the years the price has risen to the point that this V8 auto Convertible version is within touching distance of an Audi S5, an altogether more upmarket car.

That’s not to say the Ford has lost it way, because it still offers something unique in the UK: a hairy-chested V8 driving experience, handsome looks and rear-wheel-drive handling.

History tells us American sports cars are fast in a straight line and hopeless in corners, but the latest Mustang ignores that. Thanks to independent suspension at all four corners that has been revised for this facelift, the Ford handles more like a sports car should. Plus, with optional MagneRide adaptive dampers fitted (£1,600), it rides smoothly enough in town in its softer mode. 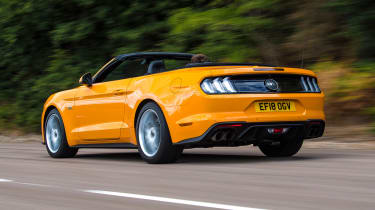 But as you increase the pace the ride starts to falter, particularly in corners when the chassis is loaded up. The rear suspension is slightly too stiff, so any mid-corner bumps tend to upset the platform. You can feel the Mustang flex more than the Audi does, too. Bumps in the road send shudders through the interior, rattling the Convertible’s cheap-feeling cabin.

However, there’s performance to match the Audi here, and more character. In our 0-60mph sprint tests, both cars managed an impressive 5.0-second time, but the manner in which they achieve that couldn’t be more different. The Ford lacks the S5’s traction and lights up its rear tyres with its 444bhp 5.0-litre V8, and although Drag Strip driving mode does its best to optimise the sprint, you can feel it fighting for traction. The Audi launches with ferocity, yet never once feels anything but stuck to the road surface.

The S5’s fast-shifting auto box also contributes to that contrast, because the Mustang’s 10-speed auto holds it back. It’s not the biggest hindrance to performance, but it’s slower to shift and has too many ratios. Using the shift paddles sometimes feels more like a suggestion than a command, because the box changes up or down when it feels ready, rather than when you ask it to. With 10 gears available, you find yourself more often in the wrong ratio than the right one. 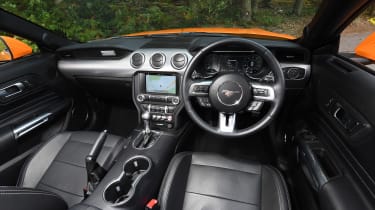 But the Mustang makes up for that with its rumbling V8, which is one of the most enjoyable engines on sale in any modern car. It dominates the driving experience, with fantastic straight-line performance and an incredible soundtrack. 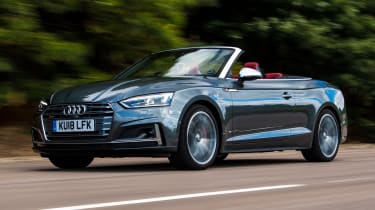 The Audi S5 Cabriolet’s strengths are quite different from those of the Ford Mustang Convertible. While the Ford uses a brawny V8 engine, the S5 features an energetic turbo V6. The Ford is rear-wheel drive, but the Audi is four-wheel drive. And although the S5’s restrained looks don’t make quite as much of a statement, the Mustang’s design is as loud as its engine note.

But that’s not to say that the Audi isn’t as exciting as the Mustang to drive. It’s true that the V6 engine is nowhere near as characterful as the Ford’s V8, but it still delivers huge performance with a pleasant soundtrack.

Both cars managed a 0-60mph time of five seconds, with the S5’s four-wheel-drive traction making up for its 95bhp deficit. However, due to having more ratios in its 10-speed box, the Ford was faster in all of our in-gear tests from 30-50mph and 50-70mph. Still, the Audi managed 30-50mph in third and fourth in 2.4 and 3.0 seconds respectively, which were only a tenth and two tenths off the Mustang’s times. 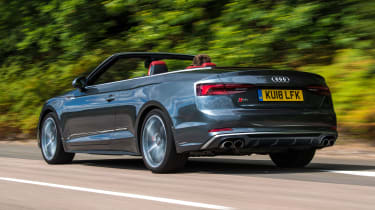 Get on the power aggressively in a bend and the Audi will stick to its line for longer, although it’s not as playful as the Ford as a result.

Turn into a corner, and it’s clear the Cabriolet can’t match the hard-topped S5 Coupé for rigidity. Even so, it remains relatively composed over rough surfaces, with less shimmy through the chassis than its rival. That’s also thanks to our car’s £900 optional adaptive ‘S’ suspension, which in comfort mode is more compliant than the Mustang’s softer setting on its adaptive dampers. It’s a must-have option because the S5’s standard sport suspension rides quite harshly on UK roads.

The Audi’s canvas roof offers better insulation from the elements than the Ford’s, because the S5 is quieter inside at speed than the Mustang. With the roof down, buffeting in both cars is acceptable even at motorway speeds, but the Ford is slightly better here because you sit lower down in the cabin. Yet while the Ford’s rear seats are useful occasionally and kids will be able to fit in the back, the Audi’s rear passenger space is much more accommodating. 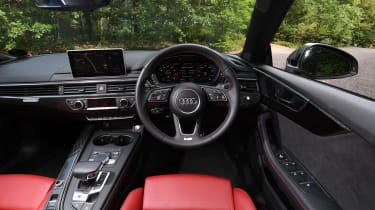 The S5’s interior is a clear winner, too; the materials used are superb and the design is functional. It’s finished beautifully, and the clean layout makes it easy to use. Audi’s Virtual Cockpit system lets you use the nav and other functions on a 12.3-inch display instead of analogue dials. It’s a great system, and while it’s not standard like the Ford’s digital dash, it only costs £250. 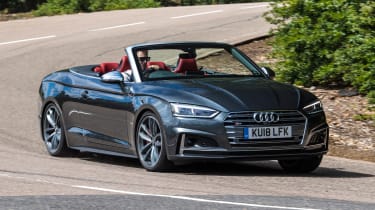 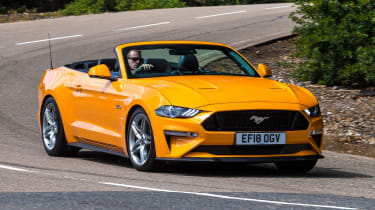 The Mustang’s personality, dominated by that V8, is hard to ignore. Improved handling makes it more fun to drive, but it’s not as comfortable, doesn’t grip as hard and isn’t as well built as the S5, so it looks pricey as a result, especially on finance. High running costs seal its fate.