Porsche Cayman vs TT S vs BMW 335i

Porsche has revamped its Cayman sports car – but do the tweaks keep it ahead of rival coupés from BMW and Audi? 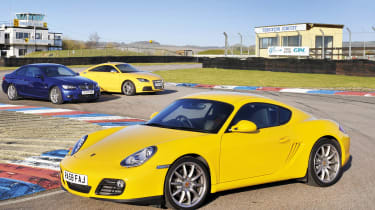 It’s not easy having the world’s best sports car as your big brother. Porsche’s Cayman has always felt the pressure to live up to the standards of the firm’s mighty 911 – but talent runs in the family.

In S trim, the original version claimed our Performance Car of the Year title in 2006 and 2007, and now Porsche’s smallest coupé has benefited from a raft of updates.

Both standard and S models get subtle styling changes and the option of the PDK two-pedal transmission. The engines are new, too: a 265bhp 2.9-litre flat-six replaces the old 245bhp 2.7 in the entry-level Cayman. Plus, for the first time, the standard manual gearbox has six ratios.

But in the sub-£40,000 price bracket, the Porsche faces some tough competition. First up is BMW’s 335i Coupé. It has a superb twin-turbo six-cylinder engine and blends pace, space and refinement in one package. Audi’s most focused TT, the TTS, brings affordable 4WD fun to the party.

Each contender is closely matched on performance and cost, but very different in character, layout and size. Can the Porsche Cayman keep its place as our class favourite?

Not often does a road test feature three cars that are so different, yet so closely matched. All three offer excellent build quality, top-notch engineering and strong pace.

To pick a winner, you need to decide what you want from your coupé. The BMW has a traditional four-seat, front-engined layout, while the Porsche is the more focused sports car. The TTS is the most hardcore TT to date, blending style and desirability with great handling and punchy performance.

For all its pace and quality, though, the four-cylinder engine doesn’t have the character of its six-cylinder rivals. Plus, the Audi coupé isn’t as involving to drive as the Porsche – so it finishes third. With its balanced handling, practicality and refinement, the 335i comes second. At the heart of its appeal is that great engine.

The BMW is better equipped than the Porsche, too – but it can’t match its driver appeal. The Cayman remains one of the best sporting cars on sale. Accurate steering, strong brakes and a rewarding chassis mean every journey comes alive when you’re behind the wheel. The boost in power and efficiency has made a winning formula even better.

2nd: BMW 335i Coupe A fantastic engine, excellent refinement and superb cruising ability ensure this is one of the most desirable four-seat coupés available. The twin-turbo is superb, while the balanced rear-wheel-drive chassis serves up all the thrills you expect from BMW.

3rd: Audi TT S Coupe The TT S delivers greater pace and a more aggressive look, and is one of Audi’s most convincing drivers’ cars. It’s closer to these rivals than ever before. The S Tronic twin-clutch gearbox is smooth and the controls intuitive. Plus, the model is great value.

Thanks to Thruxton Motorsport Centre (www.thruxtonracing.co.uk)