Sun-seekers have been choosing the Mazda MX-5 roadster since 1989. But is the latest facelifted version as good as the original? 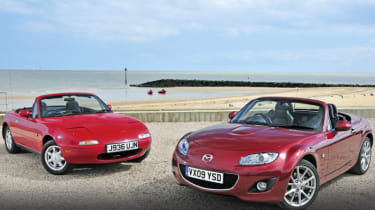 Open a copy of the Guinness Book of World Records and you’ll see the Mazda MX-5 roadster, also known as the Miata and Eunos, has its own entry.

That’s because it is officially the world’s best-selling sports car, with more than 850,000 having been built since production started in 1989. An innovative hard-top joined the line-up in 2006 and today, the third generation of the compact two-seater is as popular as ever.

But bosses at the Japanese firm aren’t resting on their laurels, and the MX-5 has been given a mid-life refresh. Visual and mechanical updates bring the promise of sharper looks, lower emissions and greater refinement. However, the roadster is so successful that the competition has been virtually eliminated. Does it need these improvements to stay ahead of the game?

We’ve pitched the newcomer against an original MX-5 – the car that started the ball rolling with its involving dynamics, value and desirable looks. The new version is faster, more refined, better equipped and safer, but does it still have the fun factor that made the first model such a hit?

The Legend lives on...

By launching its MX-5 Roadster in 1989, Mazda single-handedly revived the affordable topless two-seater market, providing buyers on a budget with a winning blend of pretty styling, driving fun and open-air thrills.

The latest model easily lives up to the legend. Its subtle facelift gives the eye-catching looks a welcome refresh, while mechanical tweaks help reduce fuel consumption and CO2 emissions.

These changes haven’t affected the way in which the Mazda drives. With a balanced chassis, plenty of feedback and lots of grip, the MX-5 provides an unrivalled driving experience.

Purists will prefer the fabric-roofed version, but the folding hard-top is a better choice as an all-weather sports car. After two decades of development, the little Mazda two-seater is still the best in the business.

Mazda MX-5 MkIII A minor makeover suffices, because there is little wrong with the outgoing model. The folding hard-top is handy, while the entertaining chassis will never fail to put a grin on your face.

Mazda MX-5 MkI After 20 years, the original MX-5 has lost none of its magic. It looks great, is engaging to drive and has a decent turn of speed. Even without the impressive safety features and refinement of the new car, it’s huge fun.