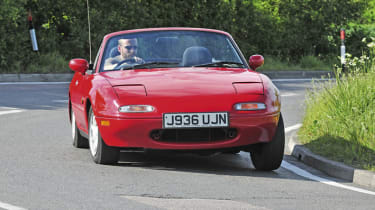 When Mazda took the wraps off the original MX-5 in 1989, it had created an instant classic. Taking its cues from British sports cars of the Sixties such as the Lotus Elan, the soft-top introduced a whole new generation to the thrill of open-air motoring.

As with the vehicles that inspired it, the Mazda’s formula for success was straightforward. Under a pretty and lightweight roadster body was a simple rear-wheel-drive chassis that put the emphasis on driving fun.

Lined up alongside the current model, our 1991 MkI is small and dainty. However, the family resemblance is clear. Not only is the basic shape the same, but details such as the power bulge in the bonnet, the gaping grille and outline of the tail-lights have been carried over to the facelifted MkIII.

Other touches mark this out as a late Eighties car. Its comparatively tiny 14-inch alloys, pop-up headlamps and delicate chrome door handles are from another era.

Stowing the fabric hood takes fewer than 10 seconds – so it’s faster than the modern hard-top version. Raising it again is a little more awkward, but it’s just about possible without leaving the seat.

On the move, the MkI’s 116bhp 1.6-litre engine delivers adequate performance. The 2009 car has a 44bhp advantage, yet it feels like more. However, with a kerbweight of only 940kg and sharp throttle responses, the original has little problem keeping up with the flow of traffic.

The older machine truly comes into its own when you head down a twisting back road. Grip is limited, but the power-assisted steering is full of feedback and the rear-wheel-drive chassis is perfectly balanced. Adding to the fun is the excellent five-speed gearbox, which requires little more than a flick of the wrist to deliver slick and swift shifts every time.

As with many older cars, this MkI shows its age only when you need to use the brakes. The four-wheel disc set-up ultimately lacks the stopping power of modern machines, while ABS was an expensive option when new, so many examples went without. As a result, drivers must pay particular attention to slippery surfaces to avoid locking the wheels.

Even that fails to detract from the MX-5’s entertaining driving experience, though. It can’t match the new car for pace, refinement or luxury, yet it’s every bit as much fun. And with MkI prices starting at around £1,000, putting a smile on your face is more affordable than ever.

WHY: The original MX-5 returned open-top sports car motoring to the masses, and proved an instant sales hit.