With its revolutionary doors, Vauxhall’s new Meriva is grabbing all the headlines. Can it beat key rivals? 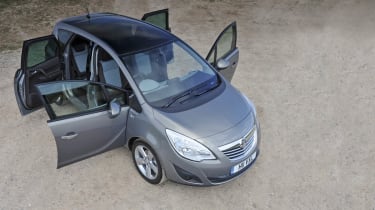 The Meriva is a small car with a big future. Vauxhall weathered a financial storm that threatened its very existence last year, but it’s about to go on the offensive, by launching one of the most interesting models of 2010. The new MPV hits showrooms in the summer, and represents a first glimpse of sunlight after a long and turbulent winter.

The Meriva comes packed with innovative features, and its rear-hinged back doors are set to grab all the headlines. They’re designed to improve access to the rear, and give the car a unique selling point in the crowded people carrier market.

The firm has sold more than 110,000 examples of the outgoing Meriva in the UK since it was launched back in 2003, so the newcomer has big boots to fill. To make matters worse, the competition is stronger than ever – and the Meriva is fighting on two fronts.

Prices start at £12,995, so it competes with traditional supermini-MPVs. But the larger dimensions also put it in contention with cars from the class above. Is the Meriva versatile enough to meet this challenge? To find out, we put it head-to-head with Kia’s new supermini-based Venga and Renault’s compact MPV class leader, the Scenic.

The new Meriva is a massive leap forward over the outgoing car. It’s bigger, more practical, better to drive and more attractive to look at. And while the body layout will make the headlines, it’s far more than just a quirky pair of doors. This is a strong addition to the line-up, and Vauxhall should be congratulated for producing such a daring design. Our only concern is over its cost, as the Meriva mixes the interior space of a supermini-MPV with the price of a compact model. Those clever doors and the premium interior feel will be enough to sway some buyers alone – but it’s fighting in one of the most competitive sectors of the entire market. Kia’s Venga has already claimed the scalp of the Citroen C3 Picasso, and it gets another one here. While it lacks the clever design touches of the Meriva, it provides compact MPV cabin space at a supermini price. The Vauxhall fares better against the Renault, yet trails on space and versatility. If you only have a young child, the Meriva makes sense – but the Scenic is a better bet for larger families.