Does Ford's all new seven-seater have what it takes to beat the rest? 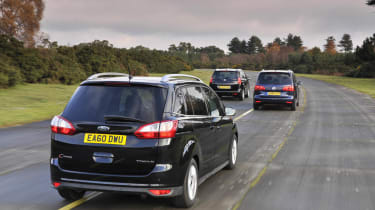 The seven-seat Grand C-MAX faces 2.0-litre diesel competitors in the shape of the Peugeot 5008 and Volkswagen Touran. Unlike the five-seater Ford, the Grand comes armed with sliding rear doors, but the VW has just been revised and saw off Renault’s Grand Scenic in a recent twin test. The 5008 is another new kid on the MPV block.

With two distinct models, the new C-MAX range is designed to appeal to a wider audience than ever before. The five-seater petrol model narrowly missed out on victory, so can the Grand version win in the seven-seat sector?
It beats the Peugeot 5008. The French contender provides plenty of equipment, a strong engine and smart styling, but interior space is compromised and it doesn’t have the Ford’s fluid ride and precise handling.
The VW Touran is a tougher proposition. Although it isn’t as engaging to drive as the C-MAX, it’s capable, spacious and well built. Still, the Ford’s interior offers more day-to-day usability – the clever folding centre seat is a neat touch, and with all seven seats in use, it offers the most legroom in each row. Better still, all the chairs fold flat with ease and the sliding doors improve access in tight spaces.
The mishmash of styles that marks out the Grand’s exterior will deter some buyers, but it takes victory thanks to its great driving position, quality cabin, impressive refinement and fine TDCi engine. The masterclass served up by the chassis is the icing on the cake.
1. Ford Grand C-MAX
The TDCi engine is the pick of the range, and in Grand form the new C-MAX loses none of its driving fun. But family buyers will be won over by the roomy cabin, flexible seat modulation and sliding rear doors. In addition, there’s a host of hi-tech options to choose from.
2. VW Touran
Revised Touran continues where its predecessor left off. It’s a solid and dependable choice, and offers plenty of room in the middle row of seats. Upright seats in the back row hamper comfort, though, and the car’s handling is composed and reassuring rather than engaging.
3. Peugeot 5008
It looks good, features a punchy engine and loads of kit, but the Peugeot offers less space in every back seat and the suspension lets vibrations into the cabin. All of the chairs fold flat, though, and it has a huge boot in two-seat mode.
Continue Reading1st Ford Grand C-MAX