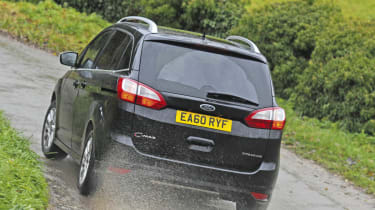 The Grand C-MAX is the best driver’s car in this class, and feels like a premium product inside and out. It’s a polished and extremely practical family model, and a great all-rounder. While this engine is smooth, anyone after a petrol C-MAX would be best to wait for the powerful and efficient EcoBoost version, which offers a genuine alternative to the hugely talented diesels. At nearly £20,000, the new Ford isn’t cheap, but Titanium spec brings lots of goodies, going some way to justifying the steep price tag.

Is this the car that could put family buyers in seventh heaven? Finally, Ford has listened to customers, and is offering the all-new C-MAX with seven seats. And Auto Express has driven it in the UK for the first time.
Called the Grand C-MAX, the model is longer and taller than the five-seater. It still looks good, although we’d stick with dark colours – like the Panther Black version we drove –  as they conceal the extra bulk  best, and contrast nicely with  the chrome grille and roof rails.
The newcomer really scores on practicality, with the twin sliding rear doors – a first for Ford in the UK – providing better access to the cabin. And once you’re inside, the middle seat folds neatly away,  creating a ‘walk through’ passage to the rear. In practice, this hard, narrow seat is better stowed  than in use, and the final two  seats are really only for young adults or children. But the extra versatility means this variant is likely to prove more popular  than the regular C-MAX.

Inside, the radical new dash looks great and build quality is  top notch. Real thought has clearly been put into making this an easy car to own, with neat touches such as the magnetic folding mats in  the boot, which ensure that the load area is always flat.
As with the original C-MAX, though, the Grand’s trump card is the way it drives. Over any surface, it delivers truly outstanding ride comfort, and although longer and heavier than the regular C-MAX, it’s hugely entertaining – even the most mundane trips are rewarding. The grippy chassis and beautifully weighted steering make cornering fun, and body  roll is virtually eliminated.
The fantastic EcoBoost engine we tried in the five-seater in Issue 1,133 won’t arrive until next year, so we drove the lower-powered 123bhp 1.6-litre petrol model. This unit is impressively smooth and refined, but it lacks the mid-range punch needed for quick progress. It feels particularly breathless below 3,500rpm,  and as it needs to be worked hard, matching Ford’s economy claims of 40.9mpg is likely to prove difficult. The diesels are a better choice – although more expensive to buy, they cost  significantly less to run.
On the subject of price, the Grand carries a premium of just above £1,000 over the C-MAX, with most models weighing in  at £20,000-plus. That’s a lot to pay for a Ford – even one as  flexible and talented as this.
Rival: Mazda 5
Latest facelifted 5 can’t quite match the Grand C-MAX for style, but is practical and good to drive. It’s not as well built and emits more CO2, yet the 1.8-litre TS version is over £2,000 less – which is food for thought.
Share this on TwitterShare this on FacebookEmail