We get to grips with the Ford C-MAX 2.0 TDCi Titanium X on UK roads. Can its MPV practicality match its driver appeal? 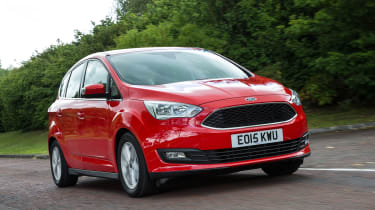 Yet again Ford has managed to deliver a car designed for those  who need the added space and  versatility of an MPV but who still have a car’s style and driving  experience somewhere on their list of priorities. There are flashes  of the Focus hatchback in the way the C-MAX steers, which means that it holds its position as one of the very best MPVs to drive. The updates ensure that those on board are more comfortable and safer than ever before, too. Although an SUV  is always going to be that bit more desirable than an MPV, the new, chiseled face of the C-MAX gives it real showroom appeal. The fact that it’s now cheaper to keep on the road is a major bonus.

The rise of the crossover may be stealing sales from more conventional passenger cars, but people still love their MPVs. That’s why Ford has overhauled its MPV range from head to toe, and the latest model to be given some tweaks is the Focus based five-seat C-MAX.

Ford hasn’t tampered with the recipe too much, but the addition of a whole heap of new safety tech will certainly catch the eye of those the car is aimed at. The new C-MAX will appeal on a visual level too, because Ford has given the C-MAX a similar style to the larger S-MAX, complete with sharp bonnet creases, hexagonal grille and angular headlamps.

What has also always made the C-MAX stand out from the rest of the compact MPV crowd is the way it drives, because having the nimble Focus hatch as its basis gives the C-MAX a head start.

Line the two cars up side by side and you’ll see that the C-MAX is 20mm longer and 157mm taller. That higher centre of gravity adds a slight degree of roll when you take it through a corner, but the exceptional body control and supple damping help mask its larger proportions. 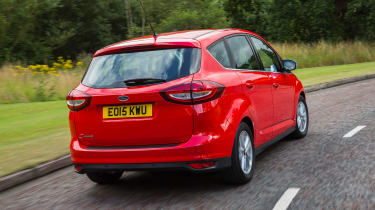 The steering is light enough so that city centre manoeuvring remains a breeze and it becomes direct and weighty at speed, so the C-MAX is agile and confidence-inspiring no matter what you’re asking it to do.

There’s a range of powertrains available, ranging from the 1.0-litre three-cylinder EcoBoost petrol engine up to a more fitting 161bhp 2.0-litre diesel. Our test car was powered by a 148bhp version of the 2.0-litre diesel paired with Ford’s slick six-speed manual gearbox. It returns official fuel economy of 64.2mpg and emits 114g/km of CO2.

The C-MAX makes for a perfectly serene and comfortable way to get around with this engine and gearbox fitted. It will get from 0-62mph in a respectable 9.5 seconds, while any gruff notes from the engine are well isolated from the cabin and wind noise deflected by the new, sleeker A-pillars. Swapping cogs with the manual transmission feels great but if you'd prefer not to do it yourself, the Powershift auto is a smooth, labour-saving alternative. 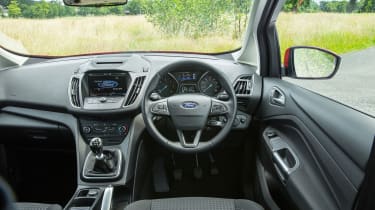 Ford has also tided up the C-MAX’s interior by redesigning the centre console and fitting a new 8.0-inch touchscreen. The system is intuitive and easy enough to use but its positioning between the air vents can make accessing some of the menus a slight fiddle.

Top-spec Titanium X models like our test car come with built-in satellite-navigation and DAB radio. New tech such as Active City Stop, Pre-Collision Assist and Cross Traffic Alert will give parents peace of mind, while a grand full-length panoramic roof floods the interior with light, further emphasising the feeling of roominess.

However, if your budget can only get you so far up the spec sheet, it’s worth noting that all models come with alloy wheels, air-con, a heated windscreen and leather trimmed steering wheel as standard, so you shouldn’t feel hard done by. 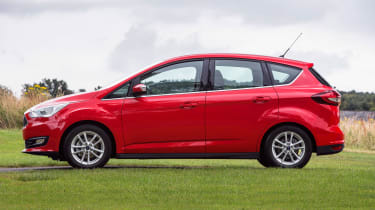 Arguably, what matters more to C-MAX buyers is space inside – and there’s plenty of that. When all the seats are raised there’s more than enough rear headroom and legroom for adults. The flat floor makes it comfortable for a centre rear-seat occupant, too. The 432-litre boot swells to 1,684 litres when you drop the rear seats.

If space is paramount, however, then for a further £1,470 you can have the Grand C-MAX. In this, the front and rear wheels are 140mm farther apart, which gives enough space for a third row of seats. Space is tight back there, though, so the third row is suitable only for children.