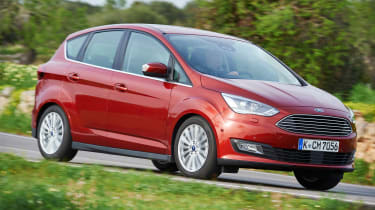 The Ford C-MAX remains great fun to drive, and with all the added kit it’s an even more attractive proposition. If the sound of a family friendly petrol-engined MPV appeals, try the 1.0-litre EcoBoost, otherwise just go for a diesel version like most other buyers.

We've already driven the seven-seat Grand C-MAX, but many will be after the refreshed five-seat Ford C-MAX, featuring Ford’s tried and tested EcoBoost technology.

Ford has no plans to bring the 1.5-litre turbocharged petrol engine that we tried to the UK. While on the face of it that seems a little disappointing, British buyers are gifted a pair of 1.0-litre units (as well as two economical TDCi diesels), which although less powerful, are more economical and kinder to the environment.

Visual changes mirror the Grand C-MAX, with all cars featuring the new grille, updated headlights and redesigned foglamps. There’s a big crease in the doors and a resculpted bonnet, as well as new tail lights at the rear. Two new colours will be available from launch – including the Rush Red in our pictures. 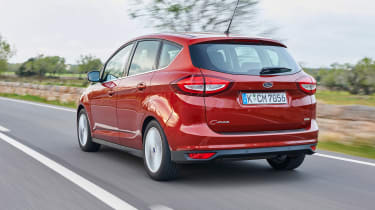 Engines aside, from behind the wheel the standard C-MAX feels just as fun, nippy and agile as ever. Due to its size, there’s less body roll than you’ll find in the Grand C-MAX, and the well-judged suspension does a great job of soaking up lumps and bumps in the road.

Out on the motorway, Ford has done a brilliant job of suppressing wind and road noise, with the C-MAX offering impressive long-distance refinement. Likewise, around town the EcoBoost engines are almost silent, while good visibility, a positive gearchange and well-weighted steering makes light work of parking. It’s a shame Ford hasn’t transferred the Grand C-MAX’s sliding doors or the B-MAX’s pillarless design, but with no third row of seats, it’s not exactly a deal breaker.

Inside, the new C-MAX gets the same updated dash as its bigger brother. It’s identical spec-for-spec, too, meaning Titanium models boast a DAB radio, heated windscreen, air conditioning and USB connectivity. The new SYNC2 touchscreen, auto lights and wipers, keyless start and cruise control are the main extras you get by picking Titanium over the lower Zetec trim. 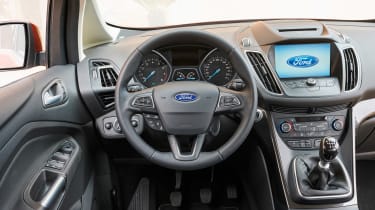 Practicality and versatility remain a key selling point, offering more outright boot space (432 litres) than conventional family cars like the Ford Focus and Volkswagen Golf. All C-MAXs now come with a space saver spare wheel (due to customer demand), and while that dents overall carrying capacity by almost 40 litres, safety-conscious families will no doubt welcome its inclusion.

It’s fair to say the C-MAX package is altogether more attractive now than it’s ever been before. Residual values are up by around £650, and while we won’t see this 1.5 petrol in the UK, the award-winning 1.0-litre EcoBoosts are worthy alternatives. The super-frugal diesels will remain the bigger sellers in Britain, however, and for a car like this, it’s easy to see why.