The revised Land Rover Discovery 4 takes on the BMW X5 – which is the best big SUV? 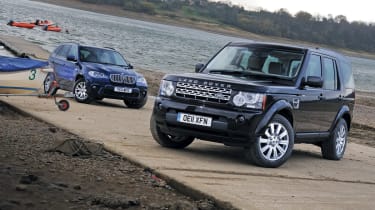 The Land Rover Discovery 4 is one of the best large SUVs around. It swept to a seventh consecutive class victory at our New Car Awards last year, but Land Rover isn’t resting on its laurels. It has continued to refine the model’s winning blend of luxury, refinement and unstoppable off-road ability.
The latest version features a range of mechanical updates specifically designed to eliminate the Discovery’s most glaring  weakness – its thirst for diesel. The new eight-speed auto gearbox promises to make it cleaner, faster and more efficient than ever before. It should be tough to beat, particularly in luxurious top-spec HSE trim tested here.
Few SUVs can match the Land Rover’s mix of comfort, seven-seat practicality and on-road refinement, but the BMW X5 is sure to give it a run for its money.
The BMW’s car-like dynamics, sporty interior and striking looks all help to set it apart from the SUV pack. And it’s already one of the cleanest big 4x4s on the market. Will that be enough to beat the high-flying Land Rover or will the Discovery 4 sail to a comfortable victory?

There's a huge difference in attitude between these cars, so it was always going to be tough to pick a winner. We’ve had a soft spot for the Discovery 4 since day one, and there’s no doubt that the latest version is the best yet. The breadth of its abilities is truly staggering, and its new gearbox and improved engine have closed the performance and efficiency gap to more conventional SUVs. But the BMW still outmuscles the Land Rover against the clock and at the pumps, and its dynamic handling makes it the best large SUV to drive. Ultimately, it all comes down to what you want and expect from a full-sized off-roader. The Discovery 4 is the more comfortable  and practical choice. It also comes loaded with kit and won’t depreciate as quickly as the X5. In the end it takes victory – but if you want pace rather than space, the BMW is a fine alternative.

1. Land Rover Discovery 4 It’s no surprise that the Discovery 4 has remained at the top of its class for such a long time. This refreshed version only serves to strengthen its appeal. Limitless practicality, unrivalled off-road ability and superb on-road refinement more than compensate for its dynamic shortcomings. We can’t recommend the Land Rover highly enough.

2. BMW X5 Sporty and stylish X5 is faster and cleaner than the Discovery 4. If you don’t need the Land Rover’s practicality, the BMW is also a capable family car. Plus, it will meet most off-road needs – but it can’t match the Land Rover’s all-round talent. It’s the second-best full-size SUV money can buy.