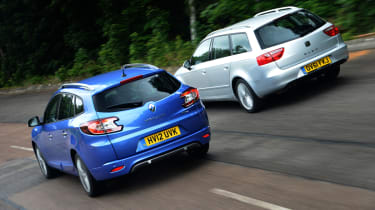 Can an estate be all the car you’ll ever need? Models like the Skoda Superb and Audi A6 mix practicality and efficiency with stylish looks and sharp dynamics – but until now, Sport Tourer versions of the Renault Megane and SEAT Exeo have failed to shine that brightly. Both models have undergone a thorough cosmetic facelift for 2012, though – so can they now challenge for class honours?

The Megane features the same efficient 1.6-litre diesel as the revised Grand Scenic MPV, plus a smart new front end inspired by the Renaultsport Megane hot hatch. We test the range-topping GT Line TomTom estate, which comes with racy styling upgrades and a sports chassis to go with its spacious interior.

The more business-orientated Exeo has also been given a facelift inside and out, and although the SE model we tested isn’t quite as well equipped as the Renault, it’s significantly cheaper – so this should be a close-fought battle.

On paper, these two rivals look evenly matched, but the Renault wins our test by a healthy margin. It’s been invigorated by the sporty updates to the exterior – with cues from the brand’s award-winning hot hatches – and the arrival of several efficient new engines, so it’s better than ever. The efficient 1.6-litre dCi 130 in our car is the pick of the Megane ST range, with excellent economy and decent mid-range clout.

Perhaps it was unfair to put the Exeo ST up against such a well rounded competitor, because it struggled to match the Renault in any department. The SEAT’s cabin has a solid, quality feel, but the dashboard now looks a little old. This is compounded by the lack of flexibility inside and the disappointingly small boot. Plus, the company is a step behind rivals, which have moved quickly to cut emissions, as it’s delayed fitting the Exeo with stop-start until later this year.

This could be a big mistake in a market where tax-conscious fleet buyers make up the majority of sales. The higher-powered SE Tech version of the Exeo still represents excellent value for money, and would probably have delivered better performance. But if you go higher up in the range, the price quickly rises beyond that of the better-equipped Megane. So the Renault is clearly the better choice.

It has an overly firm ride, but otherwise the new Megane ST hardly put a foot wrong in this test. The updates are well thought out, and the car mixes the strong practicality you expect in an estate with a sporty character that makes it good fun to drive. Add Renault’s excellent 4+ aftercare deal, and the Megane is a compelling package.

SEAT needs to go back to the drawing board if the Exeo ST is to become a genuine contender. The mild updates for 2012 don’t address its poor fuel economy and emissions, and this 118bhp model has lacklustre performance. The car doesn’t offer a unique selling point in this hard-fought class, and while the cabin is well built and comfortable, it’s not roomy enough.