Get ready for the most powerful Vauxhall ever – and the supercar bargain of the year! 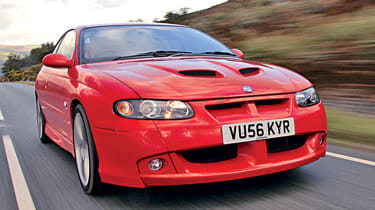 For the Monaro to make an even bigger noise than when it was first launched in the UK is quite staggering. True to the Vauxhall model’s appeal, the powerhouse VXR 500 wears its heart on its sleeve – and it’s a giant one at that. Throw in the firm’s full three-year warranty, and the VXR 500 is a seriously tempting route to supercar sensations at a fraction of the price.

Auto Express is first to drive the mighty Monaro VXR 500, and we will let you into a secret: its phenomenal performance left us short of breath.

Even better, while this 500bhp muscle machine has the ability to set your pulse racing faster than any heavy-metal workout, its price won’t get supercoupé drivers breaking into a sweat. How so? Well, at £35,995, the VXR 500 is nearly half the cost of the next nearest 500bhp two-door. Amazingly, it is even cheaper than the standard Monaro VXR, which is £37,040!

Vauxhall has teamed up with specialist tuner Wortec to develop the newcomer, and is limiting sales to one dealer only, Greens Vauxhall of Kent. Choose from red, silver or black, but whatever you do, order fast – only 50 cars are available in the UK, ensuring exclusivity the likes of which Ferrari drivers could only dream of.

Yet what about the driving experience? It may be half the price of similarly potent machinery, but is it half as thrilling? With its existing 6.0-litre V8 (shared with Chevrolet’s Corvette) boosted by a supercharger, the VXR 500’s headline stats climb from 403bhp to 500bhp, and from 530Nm to 677Nm. But it’s the way this engine goes about its work that impresses most. Pick a gear, any gear, and the car hauls in the horizon as if capable of defying the laws of physics. Torque is the secret to its unrelenting urge, the supercharger giving the V8 bigger lungs than ever.

So the performance is mighty. But what of the handling and, more importantly, the brakes? Again, our car was fitted with options in both these areas. Adjustable sports suspension is £1,695 and strikes just the right blend of fluidity and tautness, ensuring the VXR 500 is never less than entertaining, but without giving cause for discomfort.

Uprated six-piston AP Racing brakes keep all that performance on a tight leash. They’re £2,595, but with 190mph potential, are definitely worthwhile.

Criticisms? Well, the VXR 500 is hardly the last word in sophistication, and Vaux-hall would have been wise to recalibrate the traction control, which struggles to keep check of the power in the wet. But then, it’s precisely because this Monaro is such an anti-cool car and a riotous ride that buyers will love it.