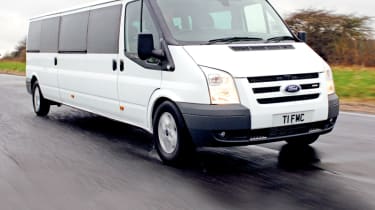 This project really does prove the adaptability of the Transit chassis. Despite the enormous increase in length, the XXL drives like any other model in the range. There’s no flex in the frame and the fit and finish are excellent. It may have humble commercial vehicle origins, but this is probably one of the most spacious and luxurious ways to get from A to B. Just don’t expect to find anywhere to park when you arrive!

You don’t have to look at the UK’s roads too hard to realise that the Ford Transit is one of the most versatile vehicles of all-time. Loads of variants are available: a van, flatbed, minibus or even a tipper truck... to name but a few! But now this list of derivatives has got longer. A lot longer.

To celebrate the workhorse’s status as International Van of the Year, Ford has built this – the Transit XXL.

It’s a one-off special that’s among the most expensive Transits ever, and is made from two standard Tourneo executive minibuses which have been cut up and stuck together.

To boost it even further, new panels have been welded in between the two halves to create this luxurious eight-seater limo. With an overall length of 7.4 metres, it is a massive 2.5m longer than the model it’s based on. And all the parts used are off-the-shelf items, including the four sliding doors.

Roll one of these back, and you’re confronted with eight captain’s chairs. Each one has seven-way adjustment, while the rearmost six feature individual DVD screens, stereo controls and bags of legroom. And if the standard privacy glass doesn’t give you enough security, then the sealed-off luggage compartment features a safe.

Up front, the chauffeur will find the cab is standard Transit. This is no bad thing, though, as the driving position gives a great view of the road and the dash is well built. Get moving, and the 2.2-litre TDCi motor pulls the limo along with surprising verve. Even the enormous length isn’t much of a problem, provided you take a wider line into tight corners. After a few minutes, it feels like any other van.

In fact, the colour and type of vehicle mean you’re not quite sure what you’re driving – an executive limousine or luxurious builders’ transport?