Want a big family car with a difference? Used Alfas have not always been a wise buy, but things are changing... 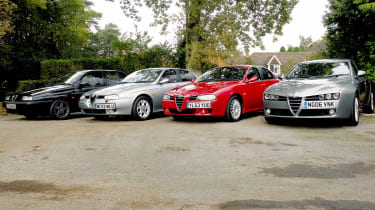 Don’t ignore the Italian brand, how­ever, because despite its reputation for rust-prone and unreliable cars, the firm’s newer models are well worth a look. They are far removed from the Seventies offerings that tarnished its image. The new breed represents great value used.

Admittedly, the cars still can’t match the class’s best for reliability, but if you buy sensibly, the 155, 156 and 159 are fine transport. Here, we look at all three to ensure you get an Italian supermodel rather than a Latin mule. The earliest model in our line-up is the boxy 155. It’s available only as a saloon with pet­rol engines – but its successor introduced some much needed variety.

In 1998, the original 156 saloon hit showrooms, with the stylish but impractical Sport Wagon estate following in 2000. The range includes a powerful 2.4-litre JTD diesel and Alfa’s Selespeed automated manual transmission, while performance fans will enjoy the 250bhp 3.2 GTA. The latter arrived in 2002, and covers 0-60mph in only 6.3 seconds – but prices start at £10,000.

Although the 2003 facelift diluted the 156’s looks, a new 2.0-litre petrol engine and tweaks to the diesel line-up give this version the broadest appeal second-hand. In February this year, the new 159 arrived. Its GM-derived engines lack the sparkle of their predecessors, but its improved build bodes well for the future. And don’t be put off by the dealers’ poor showings in our annual Driver Power satisfaction survey. There’s a wide choice of independent specialists, plus an active owners’ club (click on www.aroc-uk.com). Be sure to budget for insurance, though. Even a base 155 sits in group 14, so premiums are high.

Our choice: Facelifted 156 by the time it has reached two years old, a 156 will have endured the worst of its depreciation, yet it’s still young enough to look the part, too. So, a low-mileage 2.0-litre JTS or 1.9 JTD Multijet diesel version is a tempting proposition.

Whatever you choose, though, you should have an inde­pendent inspection carried out. And make sure any potential buy comes with a full service history. You can get your hands on a 54-plate Veloce example with either engine for around £9,500.

Alfa Romeo 155Price range: £250-£2,000 Manufactured from: 1992-1998 Good handling and raspy engines make the 155 popular with enthusiasts, but this car is the least reliable of our quartet – so only buy one that’s been well looked after by a brand specialist. Seek out a post-1995 facelifted example; they have a wider front track and more direct steering for improved handling.

The original 1.8 and 2.0-litre Twin Spark petrol engines are robust eight-valve units with timing chains, but after 1995 the 2.0 petrol had 16 valves and a cambelt – which should be replaced every 35,000 miles for peace of mind. The smaller 1.8 followed suit in June 1996, and the same advice applies.

Elsewhere, the black Speedline wheels on Sport Pack cars mark easily, and replacement rims are hard to find. Facelifted models get an immobiliser, but ensure you have its red master key – you will need it to replace any lost keys.

Alfa Romeo 156 Price range: £2,000-£8,000 Manufactured from: 1998-2003 We’d recommend a standard manual 2.0-litre car, as it’s the least troublesome and most comfortable combination. Post-2002 models are popular as they get the improved dash of the facelifted machine (right). Avoid early examples of the unreliable Selespeed automated manual – stick to later versions with a full history. These should cost the same as a manual Lusso or 2.0 Veloce.

The Q-System four-speed auto only comes with the thirsty 2.5 V6, yet doesn’t command a premium despite its rarity. Cambelts on Twin Spark petrols are due for replacement after six years or 72,000 miles, but change them at 35,000 miles to avoid early failures – it’s a £500 job. The 60,000-mile service can also be pricey; that’s when the long-life spark plugs are replaced.

Alfa Romeo 156 facelift Price range: £6,250-£17,000 Manufactured from: 2003-2006 With the arrival of the 159, prices of the last 156s fell, making this genera­tion great value – and many cars will still have some manufacturer warranty left. Styling changes include distinctive new headlamps and a revised grille.

Alfa Romeo 159 Price range: From £15,500 Manufactured from: 2006 to date Having only hit new car showrooms in February, the pretty 159 is still a rare sight second-hand. Franchised dealers are the most likely source of cars, and an ex-demonstrator is a sensible bet. You can have your late-plate Alfa main­tained by an independent specialist without invalidating its warranty – a god­send for buyers without a nearby dealer or put off by their poor reputation.

The latest GM-derived petrol engines don’t have the character of the old Twin Spark and JTS motors, while the 1.9 petrol is actually underpowered – the 159 is heavier than the 156. But the most popular choices are the cracking JTD Multijet diesels, so if you’re expecting to change your car within two to four years, they’re the best residual bet. Likewise, the stylish Sport Wagon estate is expected to command a healthy premium in the future.