Will the Discovery's off-road heritage shine through against opposition from Mercedes and Volvo? 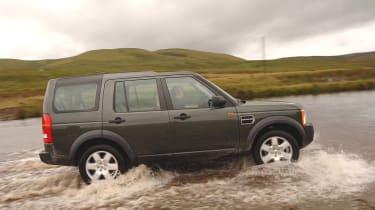 Proudly wearing the most famous badge in the sector and made here in Britain, there’s plenty of reasons to love the Discovery. But it’s the chunky ‘Tonka Toy’ looks that attract attention – modern, tough and uncluttered, the Disco is equally at home on the farm or outside a trendy restaurant.

This classless image has always been a Land Rover strength, but there’s no doubt the latest Discovery has moved upmarket. The robust build inside and out is testament to this – although the cabin is more off-roader than executive car. The plastics look and feel a little cheap compared to the luxury atmosphere in the Mercedes.

There’s a double glovebox, and all the centre cup-holders and stowage trays have removable and washable plastic inserts. Some of the buttons on the dash are small, but the standard touch-screen sat-nav is within easy reach, and although you sit high, the driving position is comfortable.

In the back, the middle row offers slightly better legroom than the Volvo. There’s plenty of space across the bench, helped by the fact the Disco is the widest car here, and all three seats are very comfortable. The floor is totally flat, so the middle seat is much more supportive than that in the XC90. The Disco’s lofty height – only 3mm lower than the GL – means headroom is good, too. Both the outer chairs flip and tumble to provide access to the third row, where the seats are comfortable but closer together than those in the GL.

Legroom is also tighter, yet the Land Rover is roomier than the Volvo in this area. All five rear chairs fold easily to give a very practical load bay – and at 2,558 litres in total, it’s the biggest here.

The Discovery is also the most refined car on test. Even though it has a diesel engine, this HSE recorded a lower sound meter figure than the GL500 at both 30 and 70mph. There’s little road noise at speed, and the ride quality is excellent. The Land Rover’s air-suspension isolates the cabin well – put simply, it’s one of the best-riding SUVs you can buy. It’s relaxing and calming to drive, but you need to adopt this laid-back approach in corners, too; if you attack the bends, the British off-roader becomes very cumbersome.

Even weightier than the GL500, the 2.5-tonne off-roader feels very heavy and has slower steering than its rivals. Nevertheless, it’s stable, and thanks to the good controls and soothing road manners, you soon find yourself adapting to the Land Rover’s way of doing things.

Once in the muddy stuff, it’s very capable. As with the GL, it can raise its suspension to increase ground clearance, plus use its clever drivetrain and electronic Terrain Response system to offer more off-road ability than 99 per cent of customers will ever use. The diesel engine makes direct performance comparisons with the GL500 pointless, and the Discovery is never less than sluggish, meaning overtaking needs careful planning – but it’s a fine cruiser once up to speed.

The six-speed automatic gearbox does smooth the changes very well, though, and given the weight they have to deal with, the brakes perform strongly, returning consistent stopping distances while the pedal stays firm under foot.

With front and rear parking sensors, plus sat-nav and a full leather interior all standard, the Discovery is as well equipped as the GL and offers exceptional value for money in comparison.

It came as no great shock that the diesel Land Rover was the most economical car, but the V6 oil-burner is by no means frugal. While the Disco had the longest range of our test trio, at 417 miles, its 23.1mpg average was well short of the maker’s 27.2mpg claimed combined figure.

Thanks to their strong brand image, Land Rover models tend to be much sought after in the used car market – and the Discovery is no exception. The TDV6 performs better than the V8 petrol variant, and after three years it will be worth £22,423 – or 51.5 per cent of its price when new.

With 130 outlets, the Land Rover dealer network is the smallest here, but its garages have fared well in our annual Driver Power satisfaction surveys. Three services cost slightly more than £1,000, and the Disco needs attention every 15,000 miles. But the basic three-year warranty covers unlimited mileage.

The diesel-powered Land Rover is probably the more likely choice as a company car in this line-up. It emits the least CO2 (274g/km), but still sits in the same 35 per cent category as its rivals. However, thanks to its lower price, it’s the cheapest option, costing £3,000 less than the GL.