The Merc's big and feels special, but how does it compare offroad? 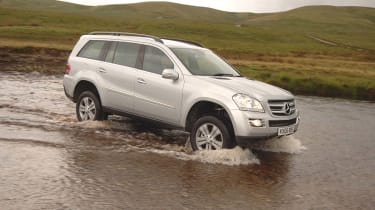 It’s hard to spot the logic in Mercedes’ decision. When many other manufacturers are simply making their off-roaders with seven seats, why has the German marque created two separate models?

The answer, according to company top brass, is that it gives the customer plenty of choice. That at least is true, since Merc’s four-wheel-drive model range consists of not only the M and GL-Class, but also the six-seat R-Class crossover MPV. It seems an expensive strategy, although it does guarantee the marque blanket coverage across the sector.

The three-pointed star’s flagship SUV doesn’t have a problem creating an impression, either. It’s vast – 250mm longer than either rival, with a wheelbase 160mm larger than the M-Class’s. Its styling and sheer size make it very imposing.

And that means it has a gargantuan cabin. In the middle row, the flat floor ensures that even the centre passenger has loads of legroom, and occupants get their own climate controls. Oddly, it’s only possible to gain access to the rear row from the right-hand seat, meaning in the UK passengers have to exit on to the road, rather than the pavement, when parallel parked. That curious set-up aside, the rear row provides the most roomy accommodation of this trio, and access is good. We can’t think of much this side of a private jet that can carry seven in such comfort.

What’s more, it has the biggest boot – a whopping 750 litres in five-seat mode – and the best party trick, too. Both the rear seats fold electrically at the touch of a button. OK, so it’s not a rugged feature, but that’s not what the GL is about. As the cabin design makes clear, this is a luxury SUV.

Virtually identical in layout to the M-Class, the dash features clear switchgear, high-quality materials and a robust finish. Neither rival comes close to the upmarket impression created by the Merc­edes. Extensive seat and wheel adjustment, as well as good visibility, mean the driving position is great – although you can’t help but look and feel very small behind the wheel, which can make the GL intimidating to drive at first.

Fitted with Airmatic suspension as standard, the Merc is not only highly refined, but has a very relaxing ride. Even more impressive for a vehicle that weighs nearly two-and-a-half tonnes is the body control. It feels solid and stable, and the air-suspension maintains great composure in corners. More­over, the GL has the best steering, yet manages to combine this with stunning off-road ability – it came close to matching the Disco in the rough.

And its engine is far more impressive. The 5.5-litre V8 delivers amazing acceleration given the GL’s size and weight. It covers 0-60mph in 6.6 seconds, bettering many hot hatches, the 7G-Tronic seven-speed gearbox offers slick, quick shifts and there’s the option of manual control with steering wheel buttons. But it was the Merc’s ability to stop from 60mph in only 34.7 metres that really surprised us.

Drive the GL500, and regardless of your opinion of large SUVs, you can’t help but be impressed by how capable, comfortable and well built it is, while for once this is a Mercedes that’s very well equipped. But given that it costs £20,000 more than either rival, this is the least we should expect – how the company thinks it can justify a £15,000 premium over the M-Class for what amounts to little more than an extra pair of rear seats and a bit more space is a mystery to us.

With a 5.5-litre V8 engine and a kerbweight that’s the best part of 2.5 tonnes, it’s no surprise economy is not a GL strength. During its time with us, it averaged 15.4mpg, giving a range of 339 miles. The vast 100-litre tank makes for eye-watering bills at the pumps as well – filling up costs around £95.

Our experts have yet to calculate residual values for the GL500 as it’s so new, but the smaller M-Class performs well – although it tends to be the diesel variants which hold their value the best. As a guide, the ML500 Sport is worth 46.1 per cent of its list price after three years.

We were surprised that the new GL was the cheapest model to service. The first three visits to the dealership cost £855 – that’s £150 less than the Land Rover. Mercedes also has the largest network here, while the 30-year Mobilo Life recovery package continues to impress.

Emitting a huge 331g/km of CO2, the GL500 is the least eco-friendly of the three off-roaders tested. Due to its expensive list price, it is also the most costly alternative for company car drivers. High-band owners should prepare for an annual bill of close to £10,000.