Volvo’s first V8 offering is impressive, especially when you consider the price tag 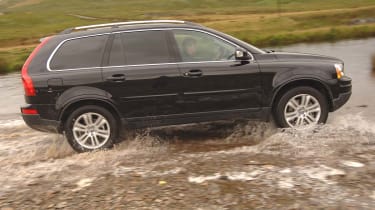 Few cars have arrived to such a fanfare as the Volvo XC90. When it first went on sale, demand far exceeded supply and waiting lists stretched for months. Auto Express loved it, too, making it Car of the Year in 2003 – the only time our ultimate accolade has ever gone to an SUV.

The cleverly thought-out cabin was key to its success, but the neat styling played a part, too. So it’s little wonder that the firm’s designers haven’t altered the looks much during the recent update. A mildly reworked grille, body-coloured mirrors and new side indicators, plus a fresh tail-lamp design, distinguish the latest version.

Inside, the straightforward cabin remains largely unaltered. But while the quality of the materials impresses, the overall ambiance isn’t quite as exclusive as the Mercedes’ driving environment. The interior is well thought-out, though, because despite its noticeably smaller dimensions – the XC90 is 290mm shorter, 56mm lower and 22mm narrower than the GL – it still offers useful accommodation.

The middle row chairs all slide individually, and while legroom isn’t as good as in the GL, there’s still plenty of head space. The centre chair also has a clever built-in child booster seat, and the middle stowage bin can be removed to allow youngsters to slide forward, level with the backs of the front seats. Once into the third row, the Volvo’s smaller exterior dimensions start to tell, because for adults the confines are a bit tight and it’s much less com­fortable than the GL. The XC90 also has a smaller boot in each seat configuration, although as with the Discovery, the split tailgate is useful.

The driving position is lower and more conventional than either of its rivals’, and this perceived lower centre of gravity makes the Volvo more car-like to drive. But in reality, it hasn’t got any more grip, and suffers from more body roll in corners. The steering is light, too, yet Volvo seems to have ironed out the kickback that could be felt through the wheel in earlier models. But while it’s certainly easy to live with in town, out on the open road it doesn’t feel as accomplished as the GL, particularly because the ride is unsettled in comparison.

Stiffer anti-roll bars, firmer dampers and sportier steering sharpen the XC90’s driving experience in SE Sport trim, yet we reckon the SE Lux model here strikes a better balance. Nevertheless, with conventional springing, it’s no surprise that the ride isn’t quite as smooth as its air-suspended rivals.

The Volvo’s six-speed automatic is new, and a vast improvement on the old unit – shifts are now less obvious, and the drivetrain is impressively slick, if still not up to Mercedes standards. The same applies to the V8 engine. Surprisingly, the 4.4-litre powerplant needs to be worked hard to give its best, but it’s still tuneful and remains refined throughout the rev range.

With 311bhp, the Volvo is 77bhp down on the GL and generates 90Nm less torque, yet the XC90 is a massive 343kg lighter. On the road, it couldn’t make the most of this advantage. It was just over a second slower from 0-60mph, at 7.8 seconds, and didn’t have the GL’s penetrating mid-range pace. Nevertheless, Volvo’s first V8 offering is impressive.

Especially when you consider the price tag. It’s £19,395 cheaper than the GL500, and standard kit includes heated, memory and leather seats. In fact, you could move up to Executive trim or add every item from the options list and still undercut the GL.

Despite having a smaller capacity, Volvo’s 4.4-litre V8 has similar claimed economy figures to the Mercedes – but over our test route it proved more efficient, at 17.8mpg. Still, with the smallest tank here (80 litres), the Volvo has the shortest range, at 313 miles.

Again, oil-burning XC90s tend to fare better second-hand. The V8 is in fact the worst model in the range for residual values, and the SE Lux loses £26,683 over the course of three years. That represents a retained figure of 42.4 per cent – five per cent worse than the equivalent D5 diesel.

The Volvo was the most expensive car in terms of maintenance – the first three inspections cost a grand total of £1,070. Generous 18,000-mile service intervals mean you won’t have to shell out very often, but the XC90 comes with a meagre single-year recovery deal.

All three of these cars sit in the top tax band for business users, so the annual bill is dependant on the list price. High earners will pay £6,486 for a standard XC90, but our test car had nearly £8,000 worth of options fitted – driving the final tax cost up by more than £1,100.