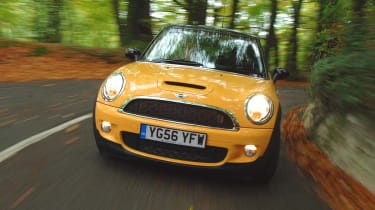 Let’s play a game of spot the difference. Comparing this MINI with its predecessor is exactly what the UK’s 200,000 existing owners will be doing right now. And like us, they’ll be struggling to see the changes – but they’re there. In fact, every single body panel is different.

The most noticeable change is found up front. The nose is longer, higher and more bulbous – and less attractive to our eyes. But there’s good reason for this transformation; pedestrian protection. This is now a safer car to step out in front of, although we strongly recommend you don’t give it a try!

Inside, the changes are more obvious, and appreciated. The fit and finish are improved, but the cheeky feel and wow factor remain unspoiled. And with options galore, including adjustable-tone ambient lighting and colour-matched trim inserts, no two Minis need look or feel the same.

There’s barely any more space for passengers or oddments, and we take the company’s claims that the new car is bigger inside with a pinch of salt. But additions such as a Sport button in front of the gearstick are welcome, while MINI has wisely left the driving position unaltered – it’s one of the best around. Even at a standstill, the sense of occasion generated from simply sitting in the Cooper S is nearly enough to net victory. But we have the first of Britain’s twistiest roads waiting, and three feisty hatches are snapping at the MINI’s heels.

Charging up the hill, working away at the much improved six-speed gearbox, the first thing that strikes you is how eager and free-revving this new 1.6-litre direct-injection turbocharged unit is. The turbo responds from less than 1,500rpm – it’s a far cry from the rev-hungry Clio, and much more responsive than the slightly wheezy supercharged motor in the outgoing Cooper S.

OK, the fizzing soundtrack has gone, but in day-to-day use that quickly proved tiring. And there’s still enough burble from the exhaust and blare at full throttle to raise a smile as you sprint from one hairpin to the next. What’s more, the turbo’s impressive torque means the MINI easily drives away from the peaky Renault, and came close to the ST’s acceleration times.

This low-range punch isn’t the new Mini’s only trick. The Golf GTI and Focus ST also have torquey turbos up their sleeve, but neither comes close to matching the ultra-direct steering and suspension of the Cooper S. With its low centre of gravity and instant reactions – even more so when you activate Sport mode for throttle and steering – Zig Zag Hill feels like the MINI’s natural home.

It changes direction with an agility only the Clio can better, but rides far more smoothly and leans gently to give a little pliancy to the process. The clever thing about the MINI is how accessible it is for all drivers. Its immediacy means it’s thrilling at all speeds, yet unlike the challenging Renault, it’s never intimidating – just a huge helping of fun.

However, you have to pay extra for air-con and a host of other kit that’s standard on the Clio. While the Cooper S has a base price of £15,995, most buyers will pay far more. Will that cost it victory?

Price: £15,995Model tested: MINI Cooper S 1.6 litre/175bhpChart position: 1WHY: Two variants are now offered: the £12,995 120bhp Cooper, and the Cooper S tested here. Its turbo engine is more efficient and torquey than the supercharged unit it replaces and, with new suspension underneath, the MINI promises to be more driveable than ever. help

The first Cooper S’s supercharged engine was thirsty, but the economy figures are up by five mpg on the new car. It proved the most efficient of our quartet at 30.8mpg on our 800-mile twisting test route.

Our experts have yet to finalise their predictions for the new MINI, but we have no doubt the Cooper S will perform brilliantly. The old model retained 55.1 per cent – this car should perform even more strongly.

This is the car to own if you like to keep a close eye on servicing costs. Why? Well, provided you sign up for MINI’s £150 tlc package, there aren’t any, except for a few wear and tear parts.

Considering a hot hatch as a company car? Then look no further than the MINI. At 164g/km, it’s 26g/km cleaner than the old car and sits five tax brackets lower than any rival here. This will save you hundreds.