The Clio's addictive to drive, with its low gearing and high revving engine. Torque suffers, though 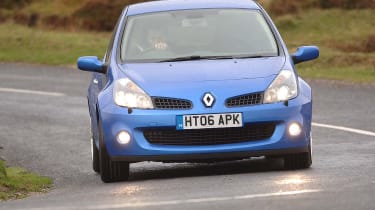 Our convoy heads from the hair-raising hairpins of Zig Zag Hill to the slightly less tortuous A39 running between Bridgwater and Minehead. This is officially rated as Britain’s ninth most twisty road, and Renault’s Clio is champing at the bit to prove it has just as much to offer as the MINI.

Its bid starts with the styling. While the Cooper S, ST and GTI have fairly standard hatchback bodyshells, the heavily sculpted 197 looks like a model in its own right rather than a mass-market Clio. Spot this catching you from behind, and you’ll instinctively think you’d best let it past.

Not so fast, though. Because for all its pumped-up looks, there’s a certain amount of “all mouth, no trousers” at work with Renaultsport’s latest creation. The root of the problem lies with the engine. The 2.0-litre, 16-valve four-cylinder unit is a reworked version of the old Clio 182’s, but the extra horsepower gained is more than offset by the latest Clio’s increase in weight. Where the last Renaultsport 182 tipped the scales at 1,090kg, the 197 is a rather portly 1,240kg.

So, it may look quick, but in this company and against the clock the 197 trails in every area. It’s even slower than the original Clio 172, launched in 2001. That means you spend more of your time on the throttle and working away at the slightly sticky six-speed, ultra-short ratio gearbox, as it takes so much longer to gather momentum compared to its rivals. Consequently, overtaking requires more planning. But outright pace isn’t everything. In a hot hatch, it’s more about how you feel behind the wheel, rather than what the speedo is reading.

The good news is the Clio 197 is more than capable of delivering the kind of cross-country entertainment every hot hatch fan craves. So long as you’re prepared to work for it, the engine spins freely to 7,500rpm and sounds suitably raucous along the way. There’s even a green change-up light to ensure you don’t stray into the rev limiter unintentionally. Keep the engine in its sweet spot above 5,000rpm, and you can then begin exploiting the chassis. And what a peach it is. The Clio’s wheel-at-each-corner stance ensures it clings to the road, there’s no body roll to speak of and the front-wheel-drive set-up changes direction with more agility than the Cooper S.

The light, artificial electric power-steering takes a little getting used and isn’t as well weighted as the MINI’s set-up, but lumps and bumps don’t unsettle the grippy chassis. Its poise is breathtaking.

There is a problem, though. It wasn’t so much the twisty roads that challenged the Clio, rather the weather. When it rains, the ultra-stiff rear suspension proves unforgiving. The tail steps out of line should you lift off mid-bend – and that’s with the ESP switched on. We’d strongly suggest you don’t turn it off. Either way, in the wet, you had better have your wits about you. Fortunately, you get plenty of warning from the driver’s seat, and can sense what’s about to happen.

The optional £850 Recaro chairs of our test car were great, and the rest of the cabin is well made and more spacious than the MINI’s. But in this company, the Renault feels the least special from behind the wheel – and doesn’t have the high-speed refinement that makes its rivals easier to live with.

It’s certainly thrilling, well equipped and attractively priced, but will the Clio’s single-minded approach prove to be its undoing?

Price: £15,995Model tested: Renaultsport Clio 197 2.0-litre/194bhpChart position: 2WHY: The Clio 197 saw off the old shape Cooper S Works in Issue 922, but this is a tougher challenge for the French hatch. It’s the only normally aspirated model here – but it trades mid-range power for razor-sharp handling. The £15,995 price is the same as the MINI.

With short gearing (70mph pulls 3,600rpm), an addictive nature and poor torque, the Clio needs to be revved hard in most situations, so it’s no wonder our car returned only 24.3mpg.

Again, our experts have yet to work out the Clio’s retained figure, but it’s unlikely to fare as well as the MINI. As a guide, the old-shape Clio 182 retained 39.8 per cent of its price after three years.

The Clio can’t match the MINI’s servicing deal, and is costlier to service than the Focus, too. However, a flat rate of £225 for each of the first three visits means there are no big bills to budget for.

Occupying the 27 per cent banding due to its high 209g/km CO2 output, the Renault is taxed eight per cent higher than the MINI, so will cost nearly £300 more per year to run.