Desirable and impressive, will the Golf hold its own in this company? 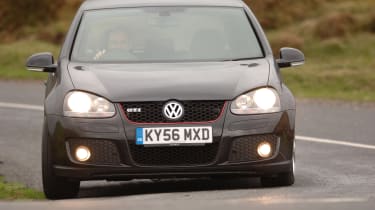 Our last road, and our final car. And what a machine it is. With 30 years of history behind it, the Golf GTI is the longest serving hot hatch of all, and is now in its fifth generation.

History counts for little in the case of the VW, though. The GTI’s had more ups and downs than a soap opera, and after two relatively weak models, has only now found form again. In a deliberate bid to reinterpret the spirit of the original 1976 GTI, albeit wrapped up in a 21st-century package, VW’s engineers hit on the magic formula.

One thing’s for certain. In this company it strikes just the right visual balance between boy racer and grown-up performance car. The tell-tale signs are all there for those in the know – a honey­comb grille with red piping, subtle side skirts and twin tailpipes. It doesn’t shout its presence like the Renault and Ford, or have the same chic designer feel as the MINI.

It’s much the same story inside. There’s an air of polished sophistication and integrity to the GTI’s cabin. The plastics are the best here, the detailing is the neatest and the overall ambience is one of a car which would be as happy tackling Paddock Hill bend at Brands Hatch as it would carving through the rush hour. But what about how it drives? Well, our final road is one surefire way to find out about that. With the Cooper S, Clio 197 and ST in tow, the GTI heads off along the A466, between Monmouth and Staunton, just on the Welsh side of the Severn Bridge.

As with the MINI and ST, the GTI uses bang up-to-date turbocharging technology to deliver its 197bhp and 280Nm of torque. The direct-injection engine has a smooth-revving nature and muffled yet slightly rorty exhaust note, which immediately sets you in the mood to push it harder.

Rev it round to the 7,000rpm red line, and you’ll soon realise that, as with the Cooper S and ST, it’s actually better to change up early and rely on the torque rather than top-end power for your thrills. Progress is rapid and overtaking is swift and safe, but you do miss the instantaneous response of the Cooper S and the tuneful warble of the ST’s potent five-cylinder motor.

Through the twists and turns of the tree-lined A466, the GTI feels composed and utterly dependable, even with the stability control system switched off. But for all its ability – and there’s plenty of it – there is something about the way the Golf goes about tackling bends that’s ever so slightly clinical and efficient, rather than engaging.

It starts with the steering. We love the GTI’s flat-bottomed wheel with its dished palm grips, but the rack itself is slower geared than the other cars here. Consequently, the GTI doesn’t turn into bends with the infectious enthusiasm of its rivals. And once you have committed to a corner, the suspension feels as if it could do with a ‘Sport’ setting to give it a firmer edge. It’s supple, sure-footed and swift, but the grin factor is down a notch or two compared to the competition.

We suspect that the imminent arrival of the sportier GTI Edition 30 will be the perfect solution to these minor criticisms. But in the meantime, the Golf does have a trump card up its sleeve – faced with a long drive home on the motorway after our cross-country action, it was the keys to the cosseting and relaxing GTI that everyone wanted.

Price: £20,360Model tested: Volkswagen Golf GTI 2.0 litre/197bhpChart position: 4WHY: A persistent thorn in the Focus ST’s side, the Golf GTI remains at the top of its game, despite being two years old. A high purchase price goes against it, but the German hatch has both quality and desirability on its side – making it a true acid test for the MINI.

Drive gently, and it’s possible to coax more than 35 miles from each gallon of super unleaded, thanks to the GTI’s hi-tech engine. Our enthusiastic driving dropped that to 28.2mpg overall.

When it comes to servicing, you pay for the privilege of GTI ownership – it’ll cost roughly £300 more than the Focus over three years. However, variable intervals allow up to 19,000 miles between checks.

The Golf GTI isn’t only a desirable car, but a cost-effective one, too. The engine only puts out 192g/km of CO2, making it cleaner than the Clio, and not much more expensive as a company option.