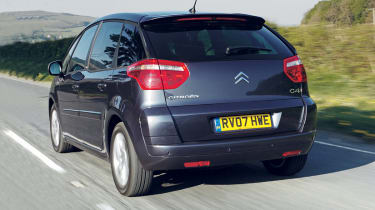 According to Citroen, 40 per cent of all five-seat MPV buyers are retired. While that high proportion may be surprising, it does explain why the Xsara Picasso continues to be such a popular seller. However, with the new, funky C4 variant, is the brand in danger of alienating this core element of its current market?

After all, the manufacturer says that, with the latest model, it’s aiming to appeal to a younger, more style-conscious family buyer who wants a car that stands out from the crowd. The C4 Picasso certainly ticks that box, and it’s refreshing to see that the French marque’s flair for design is back on track. The distinctive profile not only looks great, but also disguises the MPV’s size well – it’s the longest, widest vehicle here.

It also has the largest wheelbase, and the minimal overhangs give it a sleek appearance. The rising waistline, with its mid-placed downward kink, is a pleasing piece of styling, as is the uninterrupted glass area.

This dynamic theme continues inside the Picasso, where there is plenty to catch the eye. The main talking point is the trademark fixed-hub steering wheel; while opinion is divided on how useful it is, the feature includes all the main control buttons for the stereo and trip computer, which liberates space on the centre console.

Then there’s the panoramic windscreen. A standard feature on all C4 Picasso variants, it not only looks great, but also creates a real feeling of space, while the sliding blinds are handy in bright sunshine. The large glass area aids visibility, too, as do the ultra-thin A-pillars.

We found the boot the easiest to load, thanks to its low lip and wide opening. Plus, with the seats folded down, the Citroen offers the best capacity and longest luggage area – very useful when carrying bulky objects such as pushchairs.

Yet while it’s undoubtedly a practical machine, the C4 Picasso cannot match either rival when it comes to handling. Granted, it’s safe and confident around corners, but the Citroen offers little in the way of driver involvement, while its light steering lacks feedback. Still, the ride is excellent, and this is the best of our three cars at dealing with rough surfaces and potholes.

The 1.6-litre diesel is refined – it was the quietest at idle, and a 67dB reading at 70mph was 3dB less than the opposition could achieve. What’s more, although it lacks the punch of the competition, the motor has enough pace to keep up with traffic or overtake. But the Electronic Gearbox System – EGS – is not designed for performance. The paddleshift transmission has slow and hesitant changes, contributing to our unremarkable acceleration times at the test track.

Out on the road, the engine doesn’t feel underpowered until you reach motorway speeds. The EGS can’t replicate a standard manual transmission, and it’s even worse in automatic mode, becoming jerky and changing gears at unexpected times. Overall, it is much happier when it’s not being rushed.

The Citroen has a smaller engine, so it has to be worked harder, but that didn’t prevent it from returning the best fuel economy figure here, at 38mpg exactly. But what could be of concern to potential buyers is the price. A cost of £18,195 is expensive for a Citroen, and the VTR+ is not even the flagship model. However, opting for a manual transmission will save you £500.

The 1.6-litre Citroen engine was the most economical, with the C4 Picasso returning 38.0mpg. Yet we hoped for better, as the maker claims 49.6mpg. A big 60-litre tank provided the longest range – more than 500 miles.

Private buyers will be delighted with this – the Picasso is bucking its traditional trend for poor retained values. The 1.6 HDi model holds on to 44.5 per cent of its new price over three years, which works out at £8,097.

Citroen is known for its good value, yet the C4 Picasso’s first three services are the priciest, at £670. The network came a lowly 24th out of 32 in our Driver Power 2007 dealer survey – although that’s better than Ford’s or SEAT’s.

Specifying EGS with the 1.6 HDi cuts CO2 emissions by 5g/km, making it the cleanest engine here. Owners in the lower tax band will pay £801 a year – that’s £24 less than for the C-MAX, but the Altea XL works out £20 cheaper.