French car scores on style and refinement. What about performance? 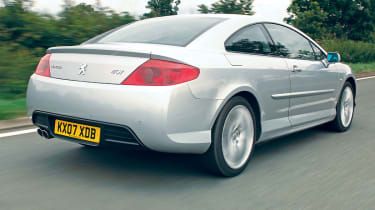 Even though BMW has more experience in this sector of the market, Peugeot has now been building its flagship Coupé for a decade. As with the 3-Series, it’s based on saloon underpinnings, but has unique styling.

Legendary Italian design house Pininfarina penned the original 406 Coupé, and the result was a model often referred to as ‘the world’s most beautiful car’. While the 407 replacement is sleek and striking, it’s not as well proportioned or elegant. The long front overhang makes it appear nose-heavy, heightened by the short wheelbase and unnecessarily large headlights. It all looks a bit bulky, and this is confirmed as it tips the scales at 1,799kg – nearly 200kg more than the Audi.

That extra weight hasn’t come as a result of better-quality interior fixtures and fittings. True, you get leather trim as standard on the seats, door panels and instrument binnacle. But even this can’t mask the fact the Peugeot doesn’t have the pedigree of the German pair.

The cabin layout, which is shared with the saloon, is plain. Although steeply raked A-pillars and plush, well bolstered seats give the Coupé some individuality, the pedals are too far up the footwell, compromising the driving position, and the complex centre console isn’t intuitive to use.

None of that will concern those travelling in the back, though; they will find access easy via the long doors and front seats that slide electrically. Pressing the 407 badge opens the bootlid, but with a small aperture and high sill, the 400-litre luggage space is the least practical here.

Twist the key, however, and you’d be forgiven for thinking you were at the wheel of the 3.0-litre petrol model. At idle, our noise meter registered only 41dB, making the diesel Coupé one of the quietest cars we’ve ever tested.

And the engine’s talents don’t end there: it revs smoothly and silently all the way to the red line, and never loses its composure. Developed in conjunction with Jaguar, the 2.7-litre transverse-mounted V6 proves the French can still teach the Germans a thing or two about diesel technology.

The relaxed nature of the powerplant suits the 407’s grand touring aspirations. The Peugeot never pretends to be a sports car – so owners are unlikely to be disappointed by its limited pace in a straight line. But they will need to plan any overtaking manoeuvres carefully, as the 205bhp power output is considerably down on the other models here, peak torque arrives later and the standard auto gearbox is sluggish to respond.

Still, while the transmission is nowhere near as slick as the BMW’s, and doesn’t encourage manual use, it performs better than the brakes. They are light underfoot and short on power; the 407 took 48.9 metres to stop from 70mph.

So the Peugeot is best treated gently – it glides effortlessly over most road surfaces, although the optional 19-inch wheels on our test car take the edge off comfort by creating some tyre roar.

But that’s the only thing to disturb the peace. The V6 is silent, with double-glazed windows keeping the wind at bay, and although it’s not exactly supple, the 407 Coupé rides confidently. Body roll isn’t an issue, and even when pushed hard, it takes a lot to provoke understeer. Chassis composure is good on the whole, too.

Buyers can also relax in the knowledge that, at £27,995, the Peugeot costs over £5,000 less than either rival, and is much better equipped as standard, too. Will that be a deciding factor?

Price: £27,995Model tested: Peugeot 407 Coupé GT HDiChart position: 3WHY: With its smooth V6 diesel, the flagship Peugeot is sure to excel as a four-seat grand tourer.

The Peugeot is heavy, at 1,799kg, but the fact that its engine doesn’t encourage hard use helps its economy. Over the course of our test, we achieved 35.3mpg. But we were expecting better – the maker’s claimed figure is 44.8mpg.

Over the course of three years, the 407 Coupé loses just as much money as its two rivals – £15,145 in total. Again, this bodystyle is a better bet than the saloon, as it holds on to nearly 20 per cent more of its new price after three years.

The 407 has easily the lowest running costs of these three, and cheaper servicing is at the centre of this. Three visits to the main dealer will set you back a competitive £695. It’s a shame there’s only a 12-month recovery package, though.

We were surprised how much CO2 the Peugeot pumps out – 226g/km is a lot. So even though it’s a great deal cheaper to buy than its rivals here, the Peugeot sits in the top company car tax band – seven groups above the Audi.