Our favourite compact two-door looks to take yet another scalp 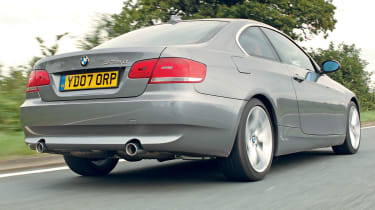 Although BMW built its first four-seat coupé way back in 1937, it’s what has happened over the past 15 years that has set the firm’s reputation in stone. Even the most optimistic sales targets could not have predicted the success of the first 3-Series Coupé. Around 25 per cent of all 3-Series sold in the UK since 1992 have been the two-door – a pattern that continues to this day.

Now in its third generation, the BMW comes into this test undefeated, having most recently seen off the Mercedes CLK, in Issue 957. In terms of design, it’s a real step forward from its predecessor. This time around, the only styling cues the saloon and coupé have in common are the door handles, side indicators and badge.

Nevertheless, while it looks modern, thanks to its attractive lights and sharp flanks, this is still a very safe piece of design. It’s shorter, taller and much narrower than the A5, and so the BMW doesn’t have such a presence on the road.

The large glass area hints at the space within, and the BMW accommodates passengers and swallows their luggage with ease. While its boot is 25 litres smaller than the Audi’s, at 430 litres, a larger opening makes loading easier, and the rear seats provide more knee and foot room than the Peugeot’s. The roof is higher, too.

Our 3-Series was fitted with the £1,295 optional red leather trim, which looks even more gaudy than that in the 407. But the German car clearly has the edge for class and quality. Much of the layout is lifted from the saloon, which is no bad thing, although the dashboard can’t match the special feel of the Audi’s layout.

The compact steering wheel makes the 3-Series’ interior appear small, but it’s great to hold, and driver comfort matches that in the Audi, too. Yet the real star of the show is the diesel engine.

Featuring a small turbo for near-instant response and a larger one for real power, the 335d’s unit produces 580Nm of torque. While Audi claims a faster 0-60mph sprint time for the A5 – at 5.9 seconds, thanks to its quattro traction – that figure looks optimistic. But we easily beat BMW’s official figure of 6.1 seconds.

There’s no doubt which is the swifter car. In every one of our tests at the track, the 335d put clear water between itself and the A5. And in our 50-70mph sixth-gear assessment, it was two seconds ahead, at 6.2 seconds, despite having similar gearing, with 70mph pulling 1,800rpm.

The BMW is a genuine super-diesel. But it was a surprise that this engine, which we’ve praised in the past for its refinement, is the crudest of the three. Although it’s still very good by most standards, noise intrusion was most noticeable in the 335d. And considering BMW’s sporting philosophy, it’s a shame that a manual box isn’t available. The auto’s paddles work well and shifts are smooth, but it’s not responsive enough.

However, this isn’t a criticism you can level at the chassis. With communicative steering, taut suspension and engaging rear-wheel-drive handling, the Coupé is particularly fluent through bends. It’s magic on a B-road, where you can enjoy the superb turn-in and balance through corners.

The flipside is that the BMW is busier than its rivals on other types of road. Its run-flat tyres don’t absorb ridges nearly so well, and it’s coarser and more tiring to drive on motorways. What’s more, you pay for the extra turbo – at £35,895, the 3 is nearly £2,500 more expensive than the Audi.

Surprisingly, the twin-turbo straight-six is less economical here than in the equivalent 5-Series, according to the official figures. Mind you, given the performance on tap, 34.8mpg is still an excellent result.

With a retained value of 56.4 per cent, the 335d is one of the best performers in BMW’s Coupé range. On average, two-doors fare seven per cent better than saloons, but five per cent worse than convertibles.

Fixed-price servicing helps keep the 3-Series Coupé’s costs under control. Five years of check-ups are available for £730, while adding maintenance – which includes consumables – bumps the total price up to £1,445.

As with the Audi, the BMW doesn’t emit much CO2 given how powerful it is. But its asking price does the damage for business users. Top-rate 335d buyers have to shell out £4,307 a year – that’s £563 more than for the A5.