Can the TT’s big brother shoot to the top of the coupe class? 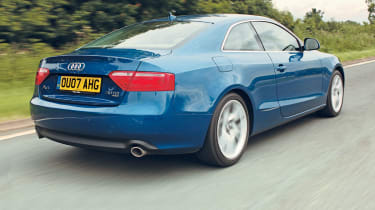 A rhythm of lines. That’s the sales pitch which accompanies the current TV advert for the A5.

The trouble is, in the pictures we had seen before this test, the newcomer’s lines didn’t seem especially rhythmical.

That’s not the case when you see it in the metal, though. The A5 is best viewed from a distance, where you can appreciate the subtle line that forms the car’s shoulder, and the sweeping roof that flows down into the bootlid, ending in a tiny lip spoiler.

If anything, we think the rear is more successful than the generic nose, as the front end is only distinguished from other Audis by the standard xenon headlamps with their dramatic LED running lights.

Up close, the first thing you notice is how low the A5’s roof is. Even though the Audi is only a few millimetres down on the BMW in terms of overall height, when you open one of the relatively short doors, you seem to have to dip much lower to get in.

Our car was fitted with the £475 optional sports seats, but even the standard items are comfortable and trimmed in leather. What’s more, the interior is all-new for the A5. We expect elements of the design will appear on the next A4, but in the meantime the Audi’s cockpit looks and feels unique.

But that’s not to say it’s perfect. The new key is rather clumsy, the switches for the electric windows click nastily and the heating controls are fiddly. Nevertheless, the A5 cabin has a high-quality feel, while the dash’s wraparound effect enhances this and provides a sense of space.

You won’t benefit if you’re sitting on the cramped back bench. But what the firm has taken away from rear legroom it’s given to the load bay – the A5’s 455-litre capacity is the largest and deepest. While the opening isn’t as big as the BMW’s, split-fold rear seats and flip-down hooks show practicality hasn’t been overlooked.

Neither has the engine. A development of the existing 3.0-litre TDI, the unit features a third-generation common-rail system and low-friction pistons, and revs to 5,200rpm (400rpm higher). As a result, it offers more power and torque, with 237bhp and 500Nm. Mind you, the V6 still falls 80Nm short of the BMW straight-six diesel’s output, and the A5 couldn’t match the 3-Series’ in-gear acceleration at the test track. The Audi also trailed behind in the benchmark 0-60mph sprint, with a time of 6.2 seconds.

But the deficit wasn’t as big as you might expect, at only one-third of a second – this is down to the extra traction of the A5’s quattro four-wheel drive and the fact our car came with a manual box. Even though the shift is springy and transmits vibrations from the engine, it’s a better bet for driver satisfaction than the auto in the 3 Coupé.

In real-world situations, the A5 isn’t nearly as fast as the BMW, but it’s more than quick enough, and pulls cleanly and eagerly from below 1,500rpm. Crucially, it’s also very smooth – it’s more composed and less rattly than the 335d, whining slightly under acceleration, but otherwise nearly as quiet as the ultra-refined Peugeot. And it’s not only the engine that impresses in this respect. The new Audi has multi-link front suspension, and that helps make it much more comfortable than the BMW; this is especially noticeable on motorways, where it’s quieter and has a more forgiving ride.

Where Audi really needed to improve its game was in the driver appeal department – and it has. The A5 features a wide track, its steering has been engineered from scratch, the 4WD is biased towards the rear and the front axle has been moved forward 120mm to counteract understeer.

All this work has had the desired effect. The A5 offers meaty steering, good turn-in and, impressively, a better sense of balance than the firm’s storming RS4. Thanks to its 4WD traction, the car is also very efficient through corners – especially slow ones. The trouble is, it doesn’t deliver the same feedback and sharpness as the BMW. Opting for the £950 Sport pack, which brings 20mm lower suspension and stiffer settings, would improve things.

Yet even in standard guise, the A5 is still satisfying and engaging to drive. It’s also cheaper to buy and run than the 3-Series, as well as better to look at and more pleasant to spend time in. But is it a good enough all-rounder to take the win?

Price: £33,430Model tested: Audi A5 3.0 TDIChart position: 2WHY: The new A5 looks stylish, has a strong and clean diesel engine and oozes sporting appeal.

With no automatic transmission to dent the economy, you’d expect the A5 to outperform its rivals. And it does – marginally. The quattro underpinnings increase the car’s thirst, but in our hands, the Audi achieved 35.6mpg.

Although our experts predict the A5 won’t be quite as strong residually as the 335d, it actually loses £650 less over three years. We’d also consider the £950 Sport pack, as models with this option perform slightly better come resale time.

Even though the A5 is now available through Audi’s 133-strong dealer network, servicing prices have yet to be revealed. The first cars won’t need a check-up until they’ve covered at least 15,000 miles, but we’d budget £850 for three visits.

Engine developments have increased torque while cutting emissions at the same time. The A5 puts out only 191g/km of CO2, and so sits in the 28 per cent bracket. It’s the cheapest fleet option, with higher-rate earners paying £3,744 annually.