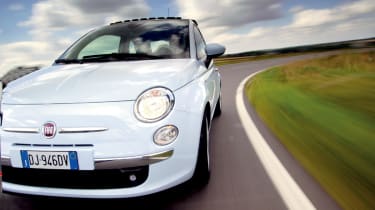 The 500 isn’t simply a new car; Fiat claims it’s a new way of thinking, and defines the way the Italian firm wants to be seen in the future. And of course, it’s decided to look back to past glories in order to move itself forward. The 500 is unashamedly retro, but then given the success of the MINI, you can hardly blame the Turin-based marque for wanting a share of the action.

And giving buyers what they want has paid off, as the firm has 35,000 advance orders for the newcomer from customers across Europe. That’s largely down to its looks. Smaller and cuter than the MINI, the 500 has a combination of gorgeous detailing and charming lines. It’s a machine that makes people smile when they see it – even those who don’t have much interest in cars.

But the beauty is more than skin deep – the 500 is predicted to get a five-star Euro NCAP crash test rating, while the interior is as bold as the exterior. The cabin is light and airy, thanks to the cream trim, chequered upholstery and body-coloured dash strip. It’s visually appealing and feels well constructed, too – it’s the best built Fiat in years.

There are downsides, though. Quality has improved, but the 500 is no better assembled than the Swift, and a couple of the cubbies are flimsy. There’s not much stowage space, while some of the design, such as the door trims, isn’t as creative as you’d like. The MINI still leads the way for overall attention to detail.

It’s clear that Fiat has taken inspiration from its rival in some areas, though. The 500 boasts a chunky gearknob, classic detailing and simple instruments – and also, unfortunately, equally cramped rear quarters (below). Knee room in the pair is on a par, but the 500’s sloping tailgate reduces headroom, while boot space is only as good as the Aygo’s. The driving position is comfortable, though, as there’s plenty of space and a good view out.

Of course the 1.4-litre engine doesn’t have the same character as the original’s two- cylinder unit, but it sounds suitably peppy, and with 100bhp it produces far more power. That’s enough to send the 500 from 0-60mph in a reasonable 10.7 seconds, but it’s not particularly sporting when compared to the similarly priced Suzuki.

The unit pulls well from 2,500rpm, but throttle response is poor, and when we compared all three of the 500’s engines back-to-back on the launch, the entry-level 1.2-litre and 1.3 diesel both got the nod ahead of this one. The packaging required to cram this model’s six-speed gearbox under the bonnet means the turning circle has grown, so the 500 can’t slot into tight spots as easily as the Aygo. But it is more fun to drive than the Japanese city car. And while the gearshift doesn’t have the precision of the MINI’s, it’s positive, and the brakes are reassuring.

Overall the driving experience, while pleasing, isn’t revolutionary. The 500 offers supermini levels of comfort and refinement in a small package, but it simply doesn’t have the MINI’s sense of fun. The steering lacks feedback, and there’s too much body roll in corners. Of course, in style-led cars such as this, driver appeal isn’t a priority, but it’s a shame the 500 doesn’t have the same bubbly personality as, say, the Panda 100HP.

The 500 is trying to be more grown up than that. It cruises happily at motorway speeds, at which point wind noise isn’t much of an issue. Tyre roar is more noticeable, especially on rougher roads, while the soft rear suspension causes the body to hop and bounce. Prices are still to be confirmed, although as our news story (Page 14) this week reveals, they will be lower than first expected. But there’s no denying that this top-spec Lounge model is well equipped. It comes with seven airbags, stability control and the innovative Blue&Me multimedia system (see Backseat driver, Page 53), so looks good value at an estimated £11,500, especially when you compare it to the £11,610 MINI One, which has far less kit.

But cost won’t count for much when the 500 hits showrooms – customers will be sold on its looks alone. And who can blame them?

Chart position: 2WHY: Cute, cool and coveted, the 500 is without doubt the most exciting car to be launched in 2007

During our time with the 500, we averaged 39.7mpg. The official claimed figure is 44.8mpg combined, which is decent, but it can’t match the Aygo or Cooper D.

Thanks to huge interest, the 500 should have strong initial residuals. But whether it can match the MINI’s impressive figures in the longer term is another question.

It’s too early to get an idea of running costs, but the 500 shouldn’t be much more than the Panda to own, so expect a figure of around 32 pence per mile.