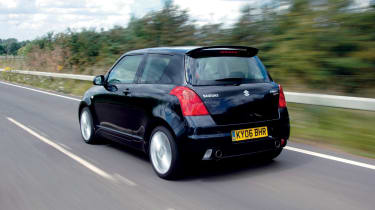 Fiat wasn’t the only firm that noticed the MINI’s popularity and decided to get in on the act. While the Italian maker could recreate its own heritage with the 500, Suzuki started with a clean sheet of paper when designing the Swift. But take a look at the rounded windscreen and the curved black A-pillars and it’s clear that the Japanese firm took some inspiration from... yes, the MINI!

The big headlights and large alloy wheels make the Swift look smaller than it actually is, while the rear spoiler and twin exhaust pipes of the Sport model give it a meaner edge. The larger dimensions mean that the Swift has the biggest boot and more rear legroom than its rivals, while the driving position is comfortable, too.

Suzuki has cut corners with the Swift’s design, though. Only the passenger side seat tilts and slides forward to aid access to the back, and the rear bench doesn’t split fold. These niggles aside, the cabin’s layout and quality are a real step forward from previous Suzuki offerings, and there’s no impression of this being a budget car.

The dash is clean, modern and logically arranged, while the steering wheel is good to hold. The Sport model’s red upholstery and matching stitching, plus metal pedals and silver accents, brighten things further.

Under the bonnet, the 1.6-litre engine is the most powerful unit here, and it offers decent pace. The Swift thrives on revs – the motor only really comes alive above 5,000rpm – so as a result it isn’t as relaxing as the diesel MINI. A 0-60mph time of 9.4 seconds is two-tenths slower than the Cooper D’s, and thanks to the diesel’s torque, the Suzuki isn’t as responsive in-gear, either.

Mid-range performance is a close match to the Sportka’s, and the Swift is more refined than the Ford at speed. However, it doesn’t feel as grown up and relaxing to drive as either the MINI or the Fiat on a long trip. As with the Ford, short gearing means the engine is working relatively hard at motorway speeds – 70mph equals 3,600rpm in fifth – while the ride is on the firm side.

The sporty suspension set-up and 17-inch alloy wheels mean that even at cruising speeds on smooth roads the Swift is stiff, and the suspension hops over bumps. There’s no denying the Suzuki has a sporty edge, but while it is nicely damped and never drastically loses its composure, it can become a little tiresome on long trips.

Drivers looking for fun behind the wheel would put up with this firm ride to enjoy the Swift’s handling. In Sport trim, it’s a small hot hatch that gets all the basics right. The steering, while not as communicative as the MINI’s or as razor-sharp as the Sportka’s, is eager to turn in, and there’s a decent amount of feedback.

The standard traction control works relatively unobtrusively, while the large amount of grip and impressive body control inspire confidence in the corners. A slick gearshift, firm brakes and a real sense of mechanical robustness finish the package off.

So while it isn’t relaxing, the Swift Sport is eager and enjoyable. It’s well equipped, too – keyless starting, six airbags and a multifunction steering wheel are all standard. It hasn’t got the innate desirability of the Fiat or the MINI, but the Swift is a modern, well built and excellent-value sporty hatch that can put a smile on your face. Is that enough for it to get the better of the 500?

Price: £11,549Model tested: Suzuki Swift SportChart position: 3WHY: Feisty and fun, the Suzuki is not only great to drive, but is also attractively designed.

With a potent 1.6-litre engine, it’s no surprise the Swift is thirstier than most rivals. We averaged 33.9mpg, which gives a range of 335 miles.

Residuals of 43.5 per cent aren’t bad for a city car, but the Swift loses the most money of these five, dropping by £6,526 over three years.

Our supplier couldn’t provide a definitive figure for the Swift, but it’s likely to cost more to run than the MINI. Budget for around 39ppm.