Is the British built supermini still king of the retro-styled crop? 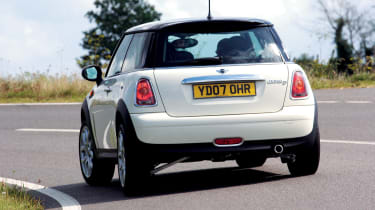 Isn't it funny how each nation has its own classic car? And they’re not rare exotics, but accessible, everyday motors designed to get people moving. Italy, of course, has the 500, Germany has the Volkswagen Beetle, France the Citroen 2CV and Britain the Mini.

Each has humble origins, but these days retro sells, and models are being reinvented as style statements, with designers seeking to recapture the same spirit wrapped in a modern package. None has been as successful as the MINI, though.

It’s an extremely familiar sight these days, and is one of Britain’s top-selling models. But despite its popularity and a recent facelift that barely modified the looks, the MINI is still a car that is capable of turning heads. The sheer range of colours and options means no two are exactly alike – a trick Fiat is also hoping to pull off with the 500.

The MINI is bigger than its rival, but not by that much. It’s 150mm longer, 60mm wider and 60mm lower. As a result it has a more sporting stance, but is frequently criticised for its modest cabin space.

There’s no denying that it’s poorly packaged; the 160-litre boot is the smallest here, for instance. But the rear seats aren’t as bad as you would expect. A 610mm measurement for knee room matched both the Fiat and Ford, and the Cooper D bettered both models for shoulder and head space. The seats are well shaped, too, and can be folded flat in an instant.

But people buy a MINI for its personality, not practicality. If anything the redesign went over the top, further enlarging the huge centre speedo so it now incorporates the stereo, while the central stack below it isn’t very attractive, either. However, in every other respect it’s stunning.

Despite Fiat’s best efforts, the MINI’s build and material quality still set the standard. It’s evident everywhere: from the way the key clicks when you slot it in the dash to the crisp action of the toggle switches. This attention to detail translates into the major controls, too; the clutch, gearchange, brakes and steering all have a precise, polished movement. The exception to this rule are the cheap, silver-painted heater controls.

There’s not much wrong with the engine, though. OK, there’s a slight shudder when you turn it off and a bit of low-speed clatter, but once up and running, it’s brilliant, pulling healthily from under 2,000rpm. You’re seldom aware it’s a diesel at all since it’s so well insulated, the gearchange is great and performance is strong.

A firm ride – which wasn’t helped by our test car’s optional 17-inch wheels and low-profile run-flat tyres – means the Cooper D jars occasionally around town. This is a shame, because the MINI’s instant turn-in and nimble nature make it great fun to drive on urban streets. Beyond city limits, it’s magic. The Cooper D is engaging in corners, yet remains composed. It’s not an old school entertainer like the Ford, but is just as enjoyable.

There’s no doubt that the MINI is a cracking car, but as ever, the one thing that needs to be taken into account is the price. We had hoped to get a MINI One for this test – at £11,600 it’s the same money as the 500 and offers similar performance, but has much less standard kit.

Even this Cooper D doesn’t offer air- conditioning as standard, which is extremely miserly. Nevertheless, the MINI’s low running costs, strong residuals and sheer desirability mean it has lost few of its powers to impress.

Unsurprisingly, the diesel Mini is the most frugal here. An official combined figure of 64.2mpg is impressive, and we averaged 47.6mpg here.

Low depreciation has always been a MINI selling point. However, a figure of 54.7 per cent means the Cooper D is one of the poorer performers in the range.

Fixed priced servicing helps the MINI keep costs under control – a rating of 35.2 pence per mile is low for a comparatively expensive car.