Can the old stager teach the 500 a thing or two? 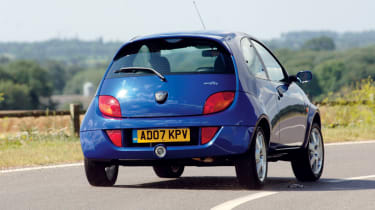 When the all-new Ka arrives next year, it will share a large chunk of its underpinnings with the 500. But when it comes to fun, the current car still has something to offer.

It’s 11 years old now, but it’s a testament to Ford that the Ka’s unique shape still looks good – especially with the racy additions of the Sportka. Looking at it, it’s clear to see what a brilliant piece of design it was in the first place.

But nowadays the proportions look slightly old- fashioned, and the cabin is also showing its age. Ergonomically, visually and in terms of quality the Ka is no longer up to modern standards. However, inside the body-coloured metal of the doors is smart and the aluminium gearknob is a neat touch. Unfortunately, the driver’s seat is set high, and there’s no wheel adjustment, so you feel cramped.

Yet the driving experience means it’s easy to forgive the Ford’s faults. The 1.6-litre engine is a peppy performer, and while short gearing doesn’t help refinement on the motorway, it means the Sportka delivers plenty of acceleration at lower speeds and similar in-gear response to the Swift.

However, it’s in the corners where the little Ford really brings a smile. It feels more alive than any rival here, thanks to its adjustable chassis, while the direct steering and predictable handling mean it’s fun to drive at any speed.

There is more body roll than in the Swift, while the brake pedal feels a little dead under foot. But it’s the greater amount of road and engine noise that betrays its age more than anything else. So while the Sportka is beaten for refinement, it knows how to entertain – and that’s something newer models still struggle to match.

Price: £9,995Model tested: Ford Sportka SEChart position: 5WHY: The Ka is more than a decade old, but it doesn’t act its age. Few cars can match its sharp handling.

With a new car due next year and lots of used models, the Ford loses £6,057 – a bigger drop than the more expensive MINI.

The Sportka’s ageing engine isn’t that clean, and insurance cover is comparatively pricey. Overall costs are in line with the MINI.