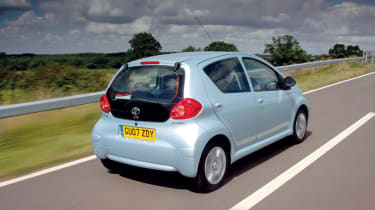 It doesn’t have the historical inspiration of the 500, but the Aygo was designed by Toyota to appeal to the same fashion-conscious buyers as the Fiat. However, it lacks style among this group, while the plastic wheel trims and one-piece tailgate are obvious signs of the Toyota’s bargain price. It’s a similar story inside, as the cabin doesn’t have the special feeling you get in the Fiat or MINI.

The driving position is acceptable, but there isn’t much adjustment to the wheel or seat. Stowage is also poor, and while the 185-litre boot matches the 500’s, it’s narrow and hard to access due to the high rear sill. On the plus side, you do get five doors (three-door models cost £250 less) and adults will fit in the back – just.

The tiny 998cc engine delivers decent acceleration around town and has a familiar three-cylinder thrum. But even taking into account the Toyota’s light 890kg kerbweight, overtaking has to be well planned and the motor worked hard through the gears.

The unit is smooth enough, but refinement at speed isn’t a strong point, while the skinny tyres surrender grip far sooner than its rivals in this test. Although the handling is safe and composed, the steering weights up under load and turn-in is accompanied by plenty of body roll. At least the ride is more accomplished, plus with good ergonomics, light, accurate controls and a slick gearshift, few cars are as easy to drive as the Aygo.

There’s a real air of mechanical robustness too – basic and simple it might be, but it’s well built and cleverly designed. Standard kit includes four airbags, an MP3 player socket and split fold rear seats. So with a price of £7,685 and low running costs, it’s exceptional value. But does it have a big enough feelgood factor to win this test?

Price: £7,685Model tested: Toyota Argo+Chart position: 4WHY: The Aygo proves you don’t have to pay much to own a city car that can take on the big hitters.

Only the diesel MINI has better claimed figures than the Aygo. An average of 42.0mpg isn’t far behind the frugal Cooper D.

It’s cheap, and a reputation for reliability means the Aygo’s residuals are strong. It loses the least money here – dropping by £3,735.

The Aygo is a cheap car to run. It sits in insurance group 1, three years’ servicing costs £455 and emissions are only 109g/km.