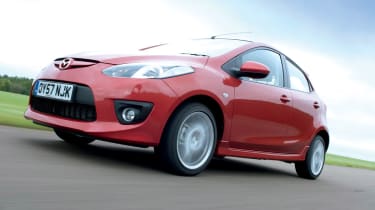 Since the original 2 arrived in 2003, replacing Mazda’s quirky Demio, the supermini class has grown rapidly. Buyers now have a huge choice of models – and the array of more capable rivals left the 2 trailing. So the firm needed to do something special to get a foothold in this lucrative market.

Unusually, designers opted to make the new car 40mm shorter than its predecessor. And as a result, both the 2’s rivals in this test are more than 100mm longer, plus taller and wider. This, together with extensive use of high-tensile steel, means the Mazda is the lightest model here. Entry-level versions weigh less than a tonne, and even this top-of-the-range 1.5 Sport tips the scales at only 1,030kg – that’s 250kg lighter than the 207.

It doesn’t look like a heavy car. The styling is athletic and dynamic, and we reckon it’s one of the most attractive superminis around: neat, taut and distinctive. As on the MX-5, there’s a lot of wheelarch clearance – an impression highlighted by our test model’s low-profile 195/45 R16 tyres.

Yet despite its compact, sporty appearance, the 2 is practical. The boot has a lift-out lining complete with a reversible floor, plus a 250-litre capacity – not far behind rivals. What’s more, the 2 leads the way for rear legroom and has a high, domed roof that enhances the sense of space.

The Mazda places the driver further forward in the car than either rival, so its windscreen is closer. As a result, A-pillar intrusion isn’t the issue it is in the 207 and Corsa, although the 2 cockpit doesn’t feel quite as airy. But a large glass area prevents any feeling of claustrophobia.

The simple yet elegant architecture is the best here, and the high-mounted gearlever, generous footwell, auxiliary socket and comprehensive steering wheel buttons are worthy of particular praise. The only real drawback is the quality of the plastics. Unlike both European models, the Mazda doesn’t feature a soft-touch dash.

What it does have is the largest, most powerful engine here. The 1.5-litre is only a fraction more potent than the Peugeot’s new 1.4-litre, but as the Mazda is so light, it posted easily the fastest acceleration times – with 0-60mph in 10 seconds – and felt more energetic in all situations.

The 2 also has the best gearshift, plus brakes that bite well – although our wet weather stopping distances were average, with the new model coming to a halt from 60mph in 39.9 metres.

At low speeds, the Japanese five-door was the quietest car thanks to its smooth, well insulated engine. It couldn’t match its rivals’ refinement on motorways, with road noise an issue, but that’s not to say it’s harsh at speed. The ride is firm, yet because its damping is so much better than the Corsa’s, it never becomes jittery or loses its composure. Body control is superb, you don’t need to change down to keep pace with traffic and, although it’s not as grown-up as the 207, it’s more enjoyable to drive.

The 2’s compact size, light, accurate controls and tight turning circle are great in town, while the quick-witted chassis is well balanced and agile. This is an everyday supermini that’s great fun to drive in most circumstances.

And although the Mazda doesn’t undercut the opposition on price, it comes well equipped as standard. The company’s straightforward pricing policy also means there is no confusing options list to plough through for the 2 – your only choice is whether or not to specify metallic paint.

As well as being the fastest car of our test trio, the Mazda is the most economical. It averaged 37.9mpg in its time with us, thanks to its light and efficient engine. Despite its small 43-litre tank, the 2 only needs to refuel every 358 miles.

Our resale value experts have yet to make their predictions for the 2, as it’s so new. But bosses at Mazda will be hoping the supermini performs better than its predecessor, which retained 35.5 per cent of its price over three years.

Mazda hasn’t set service prices for the new car yet, but the dealers we called estimated a cost of £560 for the first three checks. What’s more, the firm’s network came 14th out of 32 in the Driver Power 2007 dealer survey – far better than either rival.

As the Mazda emits 140g/km of CO2, it falls into band C, which means annual road tax of £115 a year. And if you run one as a company car, a lower-bracket earner will pay £389 a year to the Treasury – the least in this test.