Can class champ keep its crown in face of strong, new opposition? 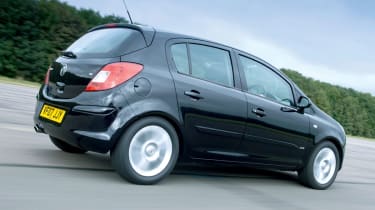 Britain’s best-selling supermini has been a big hit since it went on sale a year ago. And who can blame buyers for being so taken with Vauxhall’s baby?

As with most of its rivals, the Corsa is more visually appealing in three-door guise, but even this five-door has good proportions and a hint of sportiness. The SXi reinforces that with its front foglights and lower ride height, although it’s still longer and taller than the new 2.

Climb inside, and there’s the highest-quality interior you will find on any supermini. Decent materials and fabrics, plus solid construction, give the Corsa the feel of a car from the class above. The trouble is, despite the translucent switches and piano black surrounds for the circular air vents, the design still feels a bit conservative.

The seats are supportive and comfortable, but the gearlever isn’t as well placed as the Mazda’s. There isn’t a great deal of cabin stowage, either. Occupants in the rear fare better – legroom is ample, and while the optional sunroof fitted to our car pinches some headroom, the long windows let in plenty of light.

As is the case with the Mazda, the load area is impeded by a narrow opening, but the 285-litre capacity is the most generous in this test. And the boot’s practicality is enhanced by a split floor, so you can keep valuables hidden from view.

This versatility doesn’t extend to the engine, though. The 1.4-litre is the weakest unit in the Corsa range. It’s not only that it lacks power and provides lacklustre performance – the motor itself simply isn’t very pleasant to use.

Throttle response is lethargic and it’s sluggish through the revs, which means you have to work the gears and engine hard. And this isn’t a very tempting prospect, as the five-speed manual box has a slow shift, while the engine becomes increasingly coarse high in the rev range. Even if you do choose to push the Vauxhall, it’s short on pace, with the sprint from 0-60mph taking a disappointing 12.2 seconds.

Instead, the Corsa’s forte is cruising. Thanks to its impressive build quality and good insulation, at motorway speeds the Vauxhall is very refined and proved the quietest of our trio.

That’s not to say it’s perfect from behind the wheel. The SXi features stiffer springs and rides 20mm lower than the standard variant to give a sporty driving experience. And this set-up doesn’t really improve the Corsa, as grip and body control remain similar to those of lesser models.

In fact, the main difference is that the ride takes on a firm edge, which makes the SXi less composed over bumpy surfaces than either rival. So the sports suspension brings no real benefit; it just makes the Corsa less comfortable.

On top of that, the Vauxhall can’t match the Mazda’s keenness to turn in and doesn’t feel as light on its feet as the Peugeot. The steering weights up under load, and although it’s always stable, with plenty of grip, it seems heavy and slow to respond compared to the 2.

The Corsa’s solidity gives it a ‘big car’ feel – and that means it can’t match the Mazda’s fun factor. The Vauxhall isn’t great value either; while air-conditioning, plus cruise and stability control, are standard on the Mazda, they are on the SXi’s options list. Add in its leisurely pace, and the Vauxhall looks a less attractive proposition.

Price: £11,450Model tested: Vauxhall Corsa 1.4 SXiChart position: 3WHY: It’s our favourite supermini, but how will the sporty Corsa SXi fare against the all-new Mazda?

As the Vauxhall is lacking in torque, drivers will need to keep its engine on the boil – and that hampers economy. It’s so much lighter than the 207 that it should be more efficient, but in our hands, the Corsa returned only 35.2mpg.

The Corsa is popular among private and fleet buyers alike, but the plentiful supply of cars isn’t reflected in its resale values. After three years and 36,000 miles, the SXi model is expected to hold on to 42.3 per cent of its new price.

A price of £484 for the first three services makes the Corsa the cheapest of our trio to maintain. Vauxhall has the biggest dealer network as well, but it will be looking to improve its customer rating, as it came 24th in Driver Power 2007.

A tax disc for the Corsa costs the same as it does for the 2, as the Vauxhall emits 149g/km and sits in band C. But this 1.4 SXi is slightly more costly for company owners, with drivers earning at the lower rate facing an annual bill of £403.