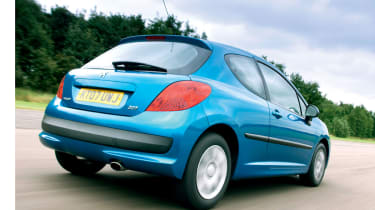 Surely Mazda can’t beat Peugeot at its own game? The French manufacturer has decades of experience of building superminis, and knows exactly what makes a good one. The 207 is a polished product.

The styling is a key ingredient – with its smooth lines, it comes across as a refined hatch and is instantly recognisable as a Peugeot. But which model? The difficulty is telling the 207 apart, not only from the 206 it replaces, but also the 307 and new 308. The firm’s design seems to be stuck in a rut – although it’s worth noting that a new styling chief has recently been hired and is promising to shake things up.

Maybe he’ll be able to do something about the interior’s mediocre packaging, too. The 207 is a large car, bigger all-round than the Corsa, yet has a smaller boot capacity – at 270 litres – and doesn’t feature the useful false floor of its rivals.

Rear seat passengers don’t have much room in which to stretch out, either. Access is trickier in our three-door – this model also has smaller rear windows – but knee and foot space is just as tight as it is in the five-door. Drivers will be more comfortable thanks to supportive seats and good steering adjustment, although if you’re tall, you will find the pedals are too high in the footwell.

The design is a mixed bag – we like the tactile material on the dash top, but below it, plastic quality is nowhere near as good as that of the Corsa and some of the switchgear appears dated. Our model was fitted with the worthwhile £400 Comfort pack, which adds climate control, as well as automatic headlights and windscreen wipers.

Overall, the Peugeot is no more user-friendly than the Mazda, but it does feel more luxurious, while the distant windscreen creates a sense of space its Japanese rival can’t match.

Under the bonnet, the 207’s new 1.4-litre engine is shared with the MINI. It promises much, yet fails to deliver. The chief problem is the sheer weight it has to drag round – this version of the Peugeot tips the scales at nearly 1,300kg, and that means the unit is often highly stressed.

There’s a sweet spot from 3,000rpm to 4,000rpm, where it’s smooth and torquey, but below that it’s weedy and higher up it’s coarse. While it delivers adequate pace, the ageing gearbox lets the side down with its sloppy shift.

The brakes are another disappointment, although this isn’t down to any weakness in the stopping power. Rather, the hard-compound Michelin Energy tyres fitted to this model are to blame; they failed to find traction in the wet. The firm rubber also meant modest levels of grip.

Otherwise, there’s much to enjoy about the way the 207 drives. The suspension is softer than on either rival here, and delivers a well damped ride that takes the edge off bumps brilliantly. The 207 is easily the most absorbent and refined car of these three, which gives it a mature feel and makes it the best choice for motorway journeys.

At the same time, it handles well. Until the 2 came along, no supermini had better steering, and the well balanced chassis ensures precise cornering. It’s capable rather than entertaining, but there’s much to appreciate about the relaxed and fluid way the 207 goes about its business.

While the three-door Peugeot is the cheapest car to buy in this test, the five-door adds £600 to the £11,225 price. It’s better kitted out than the Corsa, although we would like to see stability control included as standard equipment.

Although Peugeots don’t have the best reputation for residuals, the 207 is estimated to fare roughly as well as the Corsa. The 1.4-litre Sport is likely to retain 42.6 per cent of its price, compared to the Vauxhall’s 42.3 per cent.

The first three checks on the 207 add up to £580, which is the most expensive in this test. But you’re not paying for a quality service – Peugeot’s garages were voted a dismal 28th out of 32 in the Driver Power 2007 report.

The new engine puts out 145g/km – that’s 11g/km less than the previous 1.4, and drops the 207 down two tax brackets. As a result, the Peugeot is nearly as cheap to run for business users as the Mazda.