Can quirky, rugged Skoda score with its blend of solidity and space? 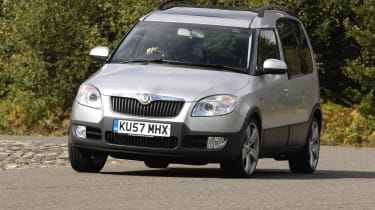 No doubt about it, the Skoda Roomster is a strange-looking thing. It resembles a more upmarket version of the Renault Kangoo or Citroen Berlingo. The side profile view is the most peculiar; it almost appears to be two cars grafted together.

The £14,070 range-topping Scout has raised suspension, and sits 43mm higher than the standard model. It’s slightly longer and wider, too. But it’s no bigger inside, and doesn’t have a particularly off-road feel, either.

Still, there’s plenty of legroom, and even with our car’s £550 optional full-length panoramic glass roof, headroom is more than generous. Visibility isn’t as good as in the Nissan, though, and the Roomster’s thick front A-pillars and small side windows give you the sense you’re enclosed.

There’s no faulting the solidity of the Skoda’s cabin construction or the quality of the plastics. The controls and switchgear are well positioned, with everything mounted high up. Cabin stowage could be a bit cleverer, though. The doorbins are narrow, there’s no centre cubby and although you get a stowage area underneath the passenger’s seat, it is small, as are both the gloveboxes.

Skoda deliberately sets out to give the rear of the Roomster a very different feel to the front, and with those large and deep side windows, this area of the cabin seems much more airy. It’s definitely a good environment for children who want to see what is going on in the world.

Only a child will be able to occupy the middle rear seat, though. With a width of 1,684mm – compared with 1,780mm for the Nissan and 1,790mm for the Kia – the Skoda is the narrowest of the three cars and the only one incapable of carrying five adults. But what the Scout lacks in shoulder room, it more than makes up for when it comes to seat versatility.

The Varioflex system offers a wide range of seat combinations. The seatback on each of the three rear chairs can be folded or tumbled forwards, although it has to be then held in place by a restraining strap attached to the back of the front seat. But the back seats can also be removed completely, and when they’re all stripped out, the load space available is the largest in this test, at 1,780 litres.

Sadly, the Skoda’s VW-derived 1.9 TDI engine takes some of the shine off the car’s appeal. With 105bhp and 246Nm of torque, the unit is not short on punch or pulling power. But it’s simply too noisy and unrefined. While all three engines are a little bit loud on start-up, unlike the other two, the Scout’s powerplant never falls quiet. And although the Skoda’s gearchange is adequate, it’s not quite as slick as the shifts provided by the Kia and Nissan transmissions.

When it comes to ride and handling, the Roomster sits somewhere in between its rivals. The suspension is quite firmly set up to counter body roll, and the optional 17-inch wheels on our car – complete with low-profile tyres – don’t particularly help absorb lumps and bumps in the surface. The Skoda’s steering offers a little more feedback than the Kia’s, but its handling simply isn’t as involving as the Nissan’s.

At £14,070, the Roomster is the cheapest in this test, and as the Scout is the flagship model, it’s well equipped. In addition to those smart alloy wheels, buyers get roof rails, a tyre pressure monitor and electronic stability as standard. Will this help to compensate for the Skoda’s flaws?

A decade ago, Skoda had the image and residual value issues Kia is facing. But the Czech brand overcame them, and now, the Roomster will hang on to a reasonable 41.2 per cent of its price over three years.

The Roomster comes with three years’ warranty that’s limited to 60,000 miles. And if you need any warranty work done, you may have a fair way to travel; Skoda has the fewest dealers of the trio of firms in this test, at 135.