A big hit since launch, SUV-styled hatch is a strong challenger 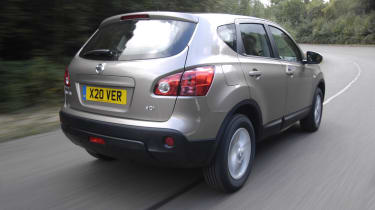 Meet the smartest and trendiest of our three cars. The Qashqai looks much more modern than the Cee’d, yet it’s not as quirky as the Roomster Scout. At 1,615mm, it is the tallest model in this test, but is still a superbly proportioned and compact design.

While the Nissan’s cabin doesn’t have the expensive feel of a Volkswagen or Audi, it is more upmarket than either the Skoda’s or Kia’s. A relatively small steering wheel with standard multifunction controls also provides a sporting edge.

There is a good range of driving positions, and it’s easy to get comfortable in the driver’s seat. The Nissan’s A-pillars are thinner than the Roomster’s, so front three-quarter visibility is good. And the Qashqai is well built, too. There’s decent cabin stowage with generous-sized doorbins and the largest glovebox of the trio.

Passengers in the rear seats get an adequate amount of space, although there’s not quite as much room as in the wider Kia – the Nissan’s transmission tunnel gets in the way if you are sitting in the middle chair. However, there is more space than in the Roomster, and the Qashqai’s back seats are the most comfortable here.

It’s a shame, then, that Nissan hasn’t been more inventive with the way in which the interior can be adapted. Even though the car has a modern image, the rear seats don’t do anything particularly clever.

The seatback splits and folds 60/40, but the base is fixed, and that means the Qashqai doesn’t have a completely flat load area. While the boot capacity is adequate enough, it’s the smallest of our trio, at 410 litres, and you have to load shopping over quite a high boot sill.

The Nissan’s 1.4-litre diesel trails both of its rivals in terms of capacity, but it’s not found wanting for refinement. It also has less torque, at 410Nm, and that means it needs revving to get the best from it – although even then it still sounds smooth and civilised.

In our test car, power delivery seemed to be slightly reluctant, and at times the Qashqai lacked the flexibility and punch of the larger capacity Roomster. This was reflected at the track in our performance assessments. The Nissan took 12.3 seconds to cover the sprint from 30-70mph; the Skoda managed it in 11.7 seconds and the Kia 11.5 seconds. At least the Qashqai’s brakes proved effective.

They brought the car to a halt from 60mph in 37.3 metres – the best here. Any fears that the Nissan’s tall body could affect handling composure and lead to excessive roll are soon put to rest. Although the steering is light, the Qashqai is easy to position accurately on the road and has good poise considering its height and weight. It rides better than both rivals, too, and although its suspension set-up is far from soft, the Nissan deals much better with rough road surfaces.

As with the two other cars in this test, the Qashqai comes with six airbags, alloy wheels and air conditioning as standard. But, oddly for a new design aimed at a younger audience, it misses out on MP3 connectivity. At £14,649, it looks good value, though, not least because of its predicted resale values.

Price: £14,649Model tested: Nissan Qashqai 1.6 dCi VisiaChart position: 1WHY: The Qashqai has an off-road look, but it’s been designed to cope with modern family life

The Qashqai is the only car here with a six-speed gearbox, which you’d expect would help its economy. But it was the most thirsty model, returning 38.1mpg. Still, a large 65-litre fuel tank gives the Nissan the best range, at 545 miles.

The £14,649 Qashqai is easily the best long-term investment. After three years, our experts estimate that it will still be worth £6,812 – which equates to 46.5 per cent of its price new, and is a much more convincing figure than either rival.

Buy the Qashqai, and you get similar cover to the Roomster, with a three-year/60,000-mile guarantee. Both the Nissan and Kia come with one-year breakdown packages, whereas the Skoda has a three-year assistance programme.

A fairly high price and the dirtiest emissions – at 145g/km – combine to make the Qashqai the most costly business choice. But only just. For standard-rate earners, the Nissan is only £18 a year more expensive to run than the Kia.