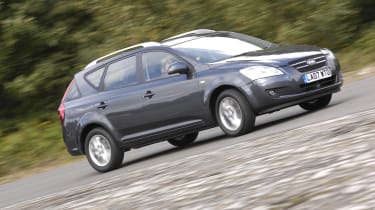 From a company that is brimming with confidence at the moment, Kia’s new Cee’d SW is hardly groundbreaking. Its conventional five-door estate format is nowhere near as stylish as the Nissan Qashqai’s semi-SUV stance. It’s not a bad-looking car, but it does feel rather dated – and up close, initial impressions aren’t much better. All the doors seem light and insubstantial.

However, once you’re settled into the cabin, it’s obvious that Kia has made huge strides forward in terms of quality. Admittedly, there are still a few weak points, such as the cheap gearlever gaiter, the shiny instrument binnacle cover and slightly flimsy seat height adjuster.

But overall the Cee’d appears solid, and the standard of the plastics used is high. The car’s design and layout are good, too, with a clean, clear, simple-to-use feel to the cabin. It’s hardly daring, but is ergonomically easy to get on with.

The Kia’s front seats are quite firm, but they do provide good support. With a height adjustable driver’s seat, plus reach and rake movement on the steering wheel, finding a good position is never a problem. There’s lots of room in the front, and tall adults are equally well catered for in the back, with plenty of head and legroom.

With the seats up, the Kia has the largest boot capacity at 534 litres, compared with 450 litres for the Skoda and 410 litres for the Nissan. The Skoda does offer more room with the chairs folded – 1,780 litres compared with the Kia’s 1,664 litres – but that’s really down to the Roomster’s extra height. In terms of practical, useful load space, the Kia’s traditional estate formula comes up trumps. As well as the sheer volume available, the Cee’d has clever storage areas hidden under the boot floor.

With 113bhp and 255Nm of pulling power, the Kia has the most powerful of the three engines on test. It’s strong and punchy on the road and always responds well, with none of the hesitancy that the Nissan suffers from at times. As our figures show, it was the fastest of the three from 30-70mph, taking 11.5 seconds. Out on the motorway, the Kia is more refined than the Skoda, but isn’t quite as civilised as the Nissan. Nevertheless, the five-speed manual gearbox and clutch are both light and easy to use.

On the whole, the Cee’d rides effortlessly, as the chassis calmly absorbs whatever the road throws at it. However, it doesn’t cope so well with deep potholes, and on badly maintained city roads it’s more crashy than its rivals – the body structure just doesn’t feel quite as stiff.

The Kia deals with corners effectively, as the handling is safe, tidy and direct. True, a little more feedback to the steering and a little less body roll would improve driver enjoyment, but the Cee’d is still safe and secure in corners.

Despite its well built cabin, roomy boot and decent driving manners, there’s no doubt that the hook which will draw in potential customers is the Cee’d’s excellent seven-year, 100,000-mile warranty. It’s much more appealing than the three-year, 60,000-mile packages that Nissan and Skoda offer, and is certainly a welcome development, although it has yet to significantly improve second-hand values. What’s more, the Kia is well equipped – for example it’s the only one of this trio to have climate control as standard. Will that help make it a winner here?

The Kia’s 1.6-litre turbodiesel returned 43.4mpg during our test, and over the course of a year or 12,000 miles, that equates to an overall fuel cost of £2,701. Of course, if the SW is used to carry heavy loads, fuel economy will tail off.

There are no predicted resale figures for the new SW yet, but they are likely to be similar to the Cee’d hatch. That’s not good news, however, as the five-door retains only 35.5 per cent of its price over three years – the poorest of the group.

An industry-leading seven-year warrenty covers the Cee’d SW all the way up to 100,000 miles – and gives it a significant advantage over its competitors. It’s high time other motor manufacturers followed Kia’s example.

Emitting 128g/km of CO2, the Cee’d SW’s 1.6 is the cleanest engine, and so the car sits in the 18 per cent tax bracket. That means standard-rate payers will pay £594 a year to the Treasury, while higher-rate earners are charged £1,080.