It looks good, but what else does the new estate have to offer? 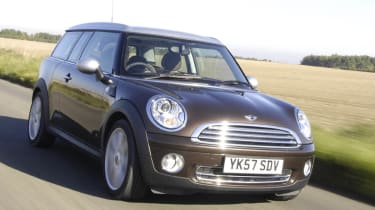 So how practical can the Clubman be? It’s 228mm longer than the three-door, but the wheelbase is only up 80mm, and it’s just 19mm taller. It’s not as if this is a genuine estate, either – it’s significantly smaller all-round than the 207 SW.

Still, the firm didn’t want to create another run-of-the mill load-lugger. Not only would it have been tricky to turn the MINI into a five-door, but the result would have lacked individuality – and that’s something MINI owners prize highly.

They also demand style, and while we think the retro Clubman is a touch contrived, it’s eye-catching, attractive and well executed.

If you like the way it looks, you’ll be smitten by the door layout. The engineering that has gone into the openings is exceptional, and they operate beautifully. No doubt about it, the Clubman has enormous showroom appeal.

But what about in day-to-day life? Here, the news isn’t so good. The rear-hinged side door – or Clubdoor in MINI-speak – opens into the road when the vehicle is parallel parked, and in multi- storey spaces, getting into the rear is a pain. You have to open the front door first, shuffle into that gap, then open the rear. Also, you need to leave more space behind the car to open the van-style boot doors than you do for an ordinary tailgate.

And if you’re expecting a commercial vehicle-sized load bay, you will be disappointed. The Clubman’s boot is 100mm narrower and 200mm shorter than the 207’s, and its 260-litre capacity falls 77 litres behind. Nevertheless, its advantage over the standard MINI is significant, and you can pack a surprising amount of gear into the Clubman – provided none of it is too bulky.

You’ll struggle to fit a buggy in without folding one of the rear seats, and the false floor on our test car is an option. But arguably the biggest problem is access. The roof overhangs the rear doors, which makes it difficult to lean into the boot.

It’s not all bad, though. Start to look in depth at the Clubman, and you’ll find that it has plenty of neat features. For instance, the rear doors not only push open by themselves, but each has a wiper and a built-in storage pocket. The seat mechanisms operate every bit as quickly and easily as the Peugeot’s, and there’s a fold-flat fabric box that’s ideal for storing soggy gear.

What’s more, the front seats still tilt and slide, which is just as well, given the narrow Clubdoor opening, while mounting an Isofix child seat is simple. The long back windows let in lots of light, and the increase in wheelbase has improved rear space. As a result, the Clubman boasts as much legroom as the 207 and 90mm more head space. The rear cabin is now a comfortable proposition – which isn’t something that can be said of the hatch.

All told, the changes transform the MINI’s potential as a family car, although it can’t match the Peugeot overall. Where it does pull ahead is with its quality, desirability and engineering. It has an exciting interior and is more engaging to drive.

The 1.6-litre petrol engine pulls harder in the Cooper than it does in the heavier 207, has a more tuneful exhaust and benefits from BMW’s Efficient Dynamics technology, which improves economy.

What’s more, the longer wheelbase means the ride is better than the hatch’s. Yet the Clubman handles just as sharply. The £1,210 premium for the new car is steep, and the MINI is a long way from being a flexible all-rounder. But with a bit of clever packing, you can take your family with you.

Price: £14,235Model tested: MINI Cooper ClubmanChart position: 1WHY: With its novel doors, the Clubman claims to add substance to the MINI’s stylish package.

We were very impressed with the fuel results we got from the Clubman. It returned 43.9mpg over our 850-mile test route, giving a 386-mile range. This shows the benefits of owner BMW’s Efficient Dynamics package aren’t restricted to diesels.

The initial hype that surrounds the MINI Clubman will help keep residual values high. Our analysts predict a 55.4 per cent retained value, meaning the car will lose over £1,000 less than the 207 SW during the first three years.

Final data wasn’t available for the new Clubman as we went to press. But we anticipate that running costs will be roughly three pence higher than the hatch’s – which means around 38.8 pence per mile for this Cooper model.

The Clubman sits in the bottom tax bracket, as does any car putting out less than 145g/km of CO2. This means lower-rate fleet users pay £470 a year – nearly £100 less than for the diesel. Yet that’s before any options are taken into account.