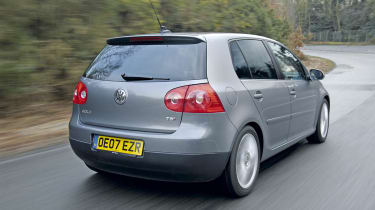 With so many family hatchbacks entering the market, it’s easy to overlook the Golf, especially since the fifth generation is such a familiar sight on UK roads. But its sophisticated image still sets the standard for desirability in this class, and it’s easy to see why it is so popular.

The body’s simple lines and detailing appeal directly to Volkswagen’s core buyers. There’s not much that catches the eye, aside from the circular rear light clusters, but the unfussy approach is neat and welcome. And besides, what the Golf lacks in visual appeal, it gains in build quality.

Few rivals come close to feeling so solid and, even with its improvements, the 308 cabin  lags behind. The VW’s soft-touch, leather-trimmed steering wheel is great to hold and,  from the gearchange to the stereo controls, everything works with fantastic precision.

While it’s not dramatic, the cabin is attractive and user-friendly. Blue-lit dials, damped cubby lids and top-notch materials provide an upmarket atmosphere. Adjustments for the driving position are excellent, and offer plenty of movement for both the seat and the steering column.

The Golf’s boot is longer and wider than the Peugeot’s, so although the 308 is narrowly ahead in terms of outright capacity, the Volkswagen has the edge overall on practicality. Adding to the appeal is the fact there’s plenty of stowage on board, with deep door pockets both in the front and back, a good-sized glovebox and a dash-top cubby. The rear seats don’t fold down flat as they do in the Peugeot, but that is only a minor gripe.

The excellent TSI engine is equipped with a supercharger and a turbocharger. As a result,  the little unit develops an impressive 138bhp from its 1.4-litre capacity, and it’s a real gem. Volkswagen also offers a more powerful  168bhp version – astounding, considering  the engine’s modest capacity.

We’ve already been impressed by the latter variant, and the lower-output motor is equally good. Unlike the 308’s unit, there’s virtually  no turbo lag and only a slight whine from the supercharger. From little more than tickover,  you get a meaty shove in the back, followed by smooth, linear power all the way up to 7,000rpm.

The slick six-speed manual gearbox ensures smoother progress than in the Peugeot, although there was no separating these two models at the test track. The Golf completed the sprint from  0-60mph in 8.8 seconds – that’s only one-tenth-of-a-second faster than the 308.

However, the TSI engine is available only with the GT Sport trim – and this features suspension that’s been lowered by 15mm. It doesn’t have  the sharpness of VW’s flagship GTI model on  the road, but is still eager through bends, with good body control and plenty of grip. It provides  a greater degree of reassurance than the 308, and feels more settled at high speeds.

What’s more, the standard equipment specification isn’t especially generous. Climate control, a multifunction steering wheel and cruise control are all on the options list. So while the  VW is desirable, will the high purchase cost  count against it in the final verdict?

Over our test route, the Golf averaged returns of 35.2mpg. That’s a good economy figure, especially as its engine uses both a turbocharger and a supercharger.

the resale value shows just how well regarded the Golf is. After three years, this GT Sport will be worth 48.6 per cent of its price new. Only the GTI performs better.

VW could also do with improving its network – it was 20th in Driver Power. That’s still ahead of Vauxhall and Ford, though, while the first three services come to £540.

Lower-band drivers face an annual tax bill of £797 for the Golf. This is £54 more than the Peugeot would cost, and is due to the Volkswagen’s higher list price.