With its space, pace and style, the Lion is moving up in the world 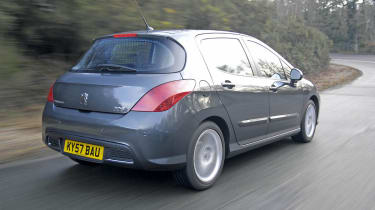 AS the first car of Peugeot’s new ‘8’ generation, the 308 has a lot riding on it. Not only is it expected to repeat the success of the 307 – of which more than three million were sold worldwide – but it is also charged with lifting the quality and image of the French firm’s hatchback offering.

Peugeot says that from the outset it wanted to build on the 307’s strengths, and it’s certainly stuck to a similar design. The newcomer keeps its predecessor’s shape – indeed, it uses the same platform and, in profile, the two look similar.

Overall, however, the latest model bears a greater resemblance to a bloated 207, sharing the same flattened wheelarches and aggressive front end with pointed snout. The rear is neat, with squared-off bumpers and a clean tailgate. But we can’t help thinking Peugeot should have been more adventurous with the design.

Thankfully, the cabin has benefited from a complete revamp. It looks and feels far superior to the 307’s, and features soft-touch plastics, plus stylish white-lit instrument dials and neat ventilation controls. The full-length glass roof gives the newcomer a strong selling point, too.

Despite these improvements, the Peugeot doesn’t share the robustness of the Volkswagen. The standard Peugeot stalk controls are starting to look dated, and the stereo is button heavy. Rear passenger headroom is excellent due to the high roof, but legroom is no more than modest and little better than that of the outgoing 307. Here again, the Volkswagen does better, and it’s the same story when it comes to practicality.

The Peugeot’s boot is bigger – with the rear seats folded, there’s 1,398 litres of room for luggage, compared to the Golf’s 1,305 litres. But it’s hampered by a high sill, which makes loading awkward, while the front seats have to be slid forward if you want to fold the rears flat.

Under the bonnet, the 308 has the stronger engine of the two cars. Its 1.6-litre unit uses a twin-scroll turbocharger and produces an impressive 150bhp. But the best aspect is the 240Nm torque output, which is available from as low down in the rev range as 1,400rpm. This helps the 308 pull away rapidly from a standstill – although at low speeds around town, you can find yourself waiting for the turbo to spool up.

Partly to blame for this is the poor five-speed gearbox, which is a real letdown, with long ratios and a slack action. It doesn’t stop the 308 from feeling like a junior hot hatch, though, and at high revs the THP emits a booming, raucous exhaust note. The 308 and Golf are evenly matched for performance and in-gear times but, under braking, the VW offers more bite.

In common with its rival, the Peugeot provides a well judged balance of ride and handling – it’s composed through corners, yet comfortable on the motorway. The suspension can be a little fidgety over uneven surfaces, but tight steering and grown-up road manners ensure that it’s capable, if not especially engaging.

At £16,895, the 308 appears good value – it undercuts the Golf by £1,200 and has more equipment. Climate control, the panoramic roof and cruise control are all included as standard.

The trouble is, at this price, the 308 is up against the top end of the class – and when compared to the likes of the Honda Civic and Ford Focus, it’s not that much of a bargain, nor is it particularly generously kitted out.

Petrol engines are becoming increasingly efficient, as proved by the 308’s claimed figure of nearly 40mpg. We managed only 32.8mpg, but that’s still good

REFLECTING the step up in quality, the 308 holds its price better than the old 307. The THP version is one of the stronger performers in the range, and will retain 39.1 per cent of its value.

TO go upmarket, Peugeot needs to sort its garages, which came 28th out of 32 in our Driver Power 2007 dealer survey. Three services cost £530 – not much less than for the Golf.