Does this version of classy supermini make as much sense as VXR? 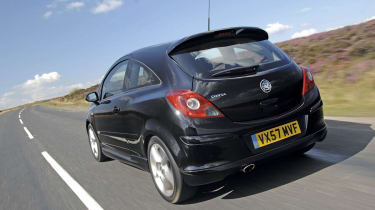 Think of hot hatches from the early Nineties, and SRi-badged Vauxhalls spring to mind. The logo can’t hope to rival the Abarth marque for heritage, but it does come with a more up-to-date back catalogue. While the Italian brand enjoyed its peak in the Sixties, the SRi badge hit the roads much later – and has featured on a string of Vauxhalls ever since.

The sporty Corsa slots into the supermini line-up beneath the flagship VXR, and looks quite sober. A small rear spoiler and five-spoke alloy wheels are the main clues to its identity. Inside are red seatbelts, matching flashes on the upholstery and steering wheel, and alloy pedals – wrapped in the spacious and solidly built Corsa cabin.

As with the Abarth, there’s plenty of adjustment on the driver’s seat and steering wheel, so getting comfortable is easy. And when it comes to versatility, the Vauxhall edges ahead. Its boot provides 10 litres more room and comes with split-folding rear seats as standard; the Punto makes do with a less practical single-piece backrest.

Rear space is on a par with the Abarth, but the Italian car will be the preferred choice if you have to travel in the back, as the side windows of the three-door Corsa provide a limited view out.

As the Vauxhall has a bigger 1.6-litre engine, you’d expect it to outmuscle its rival – even though it has a 5bhp power deficit. It beat the Abarth against the clock from 0-62mph by six-tenths-of-a-second.

The Corsa feels quicker from behind the wheel, too, although this is partly down to its uneven power delivery. Off-boost performance is lethargic, but when the turbo spools up, the power arrives in a rush that unsettles the front tyres.

Accelerate hard over heavily cambered roads or poor surfaces, and the steering wheel will writhe in your hands as the front tyres scrabble for grip. The six-speed box doesn’t shift as smoothly as the Grande Punto’s, and changing gears in the first three ratios requires patience and concentration.

The engineers at Vauxhall have also sacrificed comfort in pursuit of all-out handling. The firm set-up works best when tackling corners with commitment – here, the Corsa has superior body control to the Abarth – but when cruising, the restless suspension never settles. It fidgets over the smallest undulations and quickly becomes tiresome.

There’s no improvement at lower speeds, either, as the ride is atrocious. In town you steer past potholes and manhole covers because they send shocks through the cabin – a shame as lesser Corsas are so adept at dealing with city life. The question is whether the step up in performance provided by the SRi compensates for its dynamic flaws.

Price: £13,500Model tested: Abarth Grande PuntoChart position: 2WHY: A toned-down version of the VXR, the SRi is the affordable performance model in line-up.

On price alone, the Corsa loses out. An SRi without air-conditioning is available for a similar figure to the Abarth, but we wouldn’t recommend it. You’ll get less money back when you come to sell the car, and miss out on the benefits while you own it. Still, decent residuals help to make the Vauxhall more attractive, but it’s hard to compare with its rival. The industry experts at Glass’s Guide have yet to forecast the resale values of the Grande Punto – the Abarth badge is something of an unknown quantity at the moment. And as both cars feature turbo engines, fuel economy soon dips if you use all the available performance.