Pioneering new engine marks a change in fortune for petrol power on the off-roader. 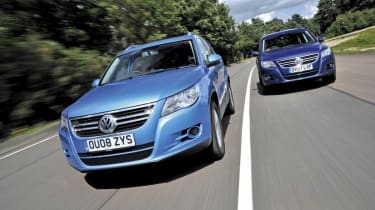 Buy an SUV, and it’s more than likely that you’ll plump for a diesel-powered version. A fuel efficient and torquey oil-burning engine has become the default unit of choice for these bulky machines.

However, that could change with the latest version of the Volkswagen Tiguan. The German firm is offering its compact off-roader with a development of its hi-tech TSI petrol motor. Featuring both a turbo and supercharger, the 1.4-litre unit produces 148bhp, while still returning 33.6mpg.

But VW hasn’t completely done away with diesel yet. The Tiguan is also available with the company’s new common-rail 2.0 TDI. Pushing out 138bhp, it gives away 10bhp to its unleaded rival, but counters this with a combined fuel figure of 40.9mpg.

So, with the scores in our test poised at 2-1 in favour of oil-burners, can the TDI take a dominant diesel victory? Or will the TSI manage to secure an honourable draw?

The first thing that impresses about the petrol-powered car is its strong performance. For the first time in this test, the diesel car can’t pull out a significant advantage against the stopwatch. In fact, in the race from 0-60mph the TSI takes 9.9 seconds, beating the TDI by 1.2 seconds. Only in the mid-range can the oil-burner pull out a lead. Here it’s able to use its hefty 320Nm of torque to post slightly quicker in-gear times.

But the TSI isn’t far behind. With a supercharger boosting low-rev torque, the diminutive motor is only two-tenths of a second slower from 30-50mph in fourth, at 6.6 seconds.

As a result, the difference in real-world performance is virtually undetectable. If anything, it’s the petrol car that feels more responsive, its engine pulling strongly and smoothly from 1,750rpm all the way to the red line. By comparison, the TDI appears breathless and isn’t as eager at low speeds, making it feel cumbersome in cut-and- thrust city traffic.

Get out on the motorway and it’s the oil-burner that proves more effective. Although both cars get a six-speed gearbox as standard, the petrol model has a shorter top gear, which makes it a less relaxed cruiser.

With neither model pulling out a decisive performance advantage, the winner of this test will be the Tiguan that represents the better value for money. Walk into a VW showroom, and it’s the diesel-powered Tiguan that appears to make less sense. At £21,795, it costs £1,090 more than the identically equipped petrol-engined version.

And it struggles to offset this price premium with lower fuel bills. While the TDI is more frugal, a return of 40.9mpg betters the TSI by only 7.3mpg. That means you’ll have to hold on to the diesel Tiguan for more than four years or cover 52,000 miles before you reach the break-even point.

Another area where the TDI disappoints is in its emissions. Usually, diesel motors tend to produce a lot less CO2 than equivalently-sized petrol units, giving both private buyers and company car users another chance to offset any list price premium with lower tax bills.

But VW’s new common-rail powerplant pushes out a relatively high 182g/km of CO2 in the Tiguan. That’s 17g/km less than the smaller capacity unleaded car, meaning it falls into VED band E. That nets owners a £170 annual tax bill – a mere £40 saving over the petrol model.

At the flag, it’s the TSI-powered Tiguan that manages to score a convincing victory over its diesel brother. It’s cheaper to buy, better to drive and for most will be cheaper to run, too.