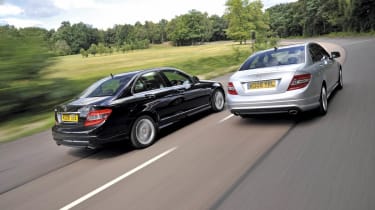 It was the black diesel C-Class in these pictures that was the inspiration for this petrol versus diesel mega-test.

Having worked out that he would be better off on the cost of filling up with a C280 rather than his long-term C320 CDI, Auto Express’s editor in chief David Johns could barely believe his calculator.

However, while there was no flaw in the sums, the boss hadn’t placed much importance on performance – an area of the diesel Merc’s armoury that clearly featured heavily in its development. At our private test track, the oil-burner proved to be a genuine dragster.

Select Sport mode, and the automatic transmission helps the compact executive to launch off the line with staggering speed. The dash from 0-60mph took 6.5 seconds, while in-gear performance is breathtaking, thanks to the lightning-quick kickdown. Priced at £31,520, the C280 Sport petrol is £4,590 cheaper than the diesel version. However, its 0-60mph time of 7.2 seconds will leave sports saloon fans craving the speed of the oil-burner. To match the C320 CDI’s pace, you’ll need to go for the C350 Sport.

It comes with Mercedes’ latest V6 petrol engine, and it weighs in at £36,110. Unusually, that means it costs £2,335 more than the range-topping diesel C-Class. Add to the equation the higher fuel consumption of the petrol variant, and there is no break-even time or mileage for buyers of the oil-burner – they save money from day one!

Official combined economy for the C320 CDI is 38.7mpg, and our own fuel returns since its arrival in March measure consistently at around the 33mpg mark. Opt for the C350 and the firm claims only 29.1mpg on the combined cycle.

So does the petrol model justify its steep costs with sparkling performance? Well on paper, the petrol Mercedes appears to have a decisive advantage. Its hi-tech 268bhp 3.5-litre V6 is both bigger and more powerful than its rival, boasting an extra 47bhp over the C320. But against the stopwatch, the C350 is left trailing in the CDI’s wake.

A 0-60mph time of 6.7 seconds is only two-tenths of a second slower than the diesel, while the 50-70mph increment took 4.1 seconds. In isolation this is a blisteringly quick time, but it’s still three-tenths of a second adrift of the oil-burner.

The secret to the C320’s dominance is its 510Nm of torque, which it delivers from a lowly 1,600rpm. This not only gives the CDI stunning real-world performance, but also makes it a much more relaxing car to drive.

Every small prod of the accelerator unleashes a wave of forward thrust, which allows you to dispatch slow-moving traffic with ease. In comparison, the V6 motor of the C350 has to be worked hard to keep up, as it gives away 160Nm. This means the smooth-shifting seven-speed auto gearbox is constantly dropping down a ratio for more acceleration. As a result, engine noise can be more intrusive, while fuel economy suffers even further.

On the road, the differences between the two are less obvious. Both cars get the more focused Sport suspension settings that come with stiffer springs, a 15mm lower ride height and much sharper driving dynamics than the standard C-Class.

Turn into a tight bend in either Merc, and you’ll find light and direct steering, strong grip and a balanced chassis. Fortunately, this sporting edge doesn’t affect ride comfort, as both the C320 and C350 are composed and compliant at motorway speeds. The driving experience is enhanced by the excellent seven-speed automatic gearbox that’s fitted as standard to both cars. It serves up slick shifts and can be operated in manual mode by wheel-mounted paddleshifters. But it’s in the C320 that the gearbox really impresses, proving to be a perfect match for the torquey powerplant.

Right from the start, the C350 was on the back foot. It’s more costly to buy in the first place and is thirstier at the pumps, too, so it really had its work cut out to beat its diesel-engined brother.

Things only got worse for the petrol-powered Mercedes when it then trailed the CDI at the test track. But its fate in this test is sealed when you look at the rest of the running costs. A CO2 output of 232g/km places the C350 in the top band G bracket for road tax, while company car costs for higher rate payers reach nearly £5,000 – almost £1,000 in excess of the diesel version.

In the face of such overwhelming evidence, it’s no surprise that the C320 CDI emerges from this contest on top. Its blend of performance, price and economy simply can’t be matched by the petrol car.