Petrol model is bigger seller, but is it a better buy for the cost-conscious? 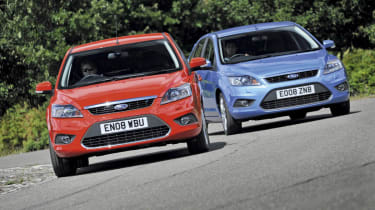 The Focus is one of our favourite compact family hatchbacks. Spacious, versatile and great to drive, it sets the benchmark for many new rivals.

And last year, more than 70,000 were bought in the UK, making this Britain’s best-selling car. Petrol models make up two-thirds of all Focus sales, but could these customers get a better deal with a diesel?

To find out, we compared two Zetec variants: a 98bhp 1.6-litre petrol and a 107bhp TDCi diesel. Visually, there is virtually nothing to separate the two hatchbacks. Both benefit from the recent mid-life facelift that freshened up the Focus, giving it a Mondeo-style nose and revised rear end. Few will spot the only difference between the two – a small TDCi badge nestling on the boot of the oil-burner.

Inside, both have the same spacious, solidly built cabin. However, the rev counter in the diesel is red-lined at a rather lazy 4,500rpm, while the petrol extends to 6,500rpm.

It’s only when you pick up a brochure that the differences become crystal clear. Despite identical specifications, a 1.6-litre TDCi powered Zetec will set you back £17,345 – a hefty £1,500 more than an identically equipped 1.6-litre petrol.

But despite this significant price difference, the cost of running the two Fords is actually closer than you’d think. That is in part down to the oil-burner’s superior economy. With an impressive combined figure of 62.7mpg, it betters its petrol rival by 20.5mpg, and is only 0.1mpg behind the super-frugal diesel Toyota Yaris.

As a result, over the course of 12,000 miles the TDCi will cost £442 less in fuel bills, despite diesel being at least 10 pence more per litre than unleaded.

As with the Yaris, drivers will have to hold on to the TDCi for around three-and-a-half years to recoup the difference over the petrol car.

The ace up the oil-burning Ford’s sleeve, though, is its CO2 output. At 119g/km, it falls into tax band B, with a VED bill of only £35. Its petrol counterpart emits 159g/km, so the road fund licence is an additional £110.

The low CO2 diesel Focus makes better sense than the petrol for company car drivers, too. Standard-rate tax payers will have to fork out £451, or £151 less than for the petrol car. As for scheduled maintenance, though, the two cars are on a par. Unlike the Yaris or Mercedes C-Class, there’s no premium for having the oil-burner serviced.

So financially, there’s a convincing case to make for the diesel Focus, particularly if you plan to keep the car for four years or more. But can it repeat the same trick once you get behind the wheel? At our test track, the TDCi immediately delivered a hammer blow to its petrol counterpart. With 260Nm of torque, the oil-burner proved much more rapid than the unleaded variant. For example, the diesel’s sprint from 50-70mph took 11.9 seconds, nearly four seconds faster than the breathless petrol version.

In real-world situations, the oil-burner feels quicker and more responsive, while its superior torque provides greater punch on the motorway and for overtaking manoeuvres.

Turn into a sharp bend, however, and the tables are turned. Both have an excellent blend of ride and handling, but the petrol car is the more agile of the two. With less weight over the front wheels, its steering is sharper and grip stronger. It’s also marginally quieter than the oil-burner at motorway speeds, despite having a shorter top gear.

So, is that enough to tip the scales in favour of the best-seller? In the final reckoning, the battle between the blue oval twins was the closest of our quartet to call.

The petrol makes financial sense if your annual mileage is low and you change cars often. But the diesel’s small appetite for fuel, lower tax bills, better residuals and stronger performance provide enough compensation to justify its higher purchase price.